Gold-Forex Correlations: Gold Has Room to Fall if US Data Outperforms

The Takeaway: Gold’s longer term correlation with the Japanese yen has put it at the mercy of better economic developments in the United States, from better macroeconomic data or US-based risk appetite in the form of earnings. As the USDJPY pair is highly correlated with the difference between US yields and Japanese yields, a rise in treasury yields due to better economic developments specifically from the US markets may weaken gold further.

Weekly Commentary: Gold’s correlation with major forex pairs has returned to a familiar position: a notable tracking with the Japanese yen and against the US dollar. On shorter timeframes, the metal has also followed the dollar closely, largely due to speculation of a Spanish bailout stoking worldwide risk appetite and higher earnings in the US driving investments back to the US equity markets.

Following the second to last FOMC meeting of the year which gave no further hints of new stimulus and a higher than expected advance GDP print for the third quarter, markets were buoyed by hints of green shoots in the world’s largest economy. As this reduces expectations for the Fed to embark on additional easing, the dollar rallied against some of its counterparts. However, with this higher productivity resulting in higher risk appetite, currency markets traded relatively mixed.

Gold’s performance for the next week will largely be dependent on Friday’s scheduled NFPs. The US labor market is expected to have added 125,000 jobs in October, higher than last month’s 114,000. Yet before the end of the week data event held in high anticipation, Spain is expected to request a bailout this week, as it has until Wednesday to submit a list of banks needing recapitalization, a prerequisite for a bailout of the entire nation. 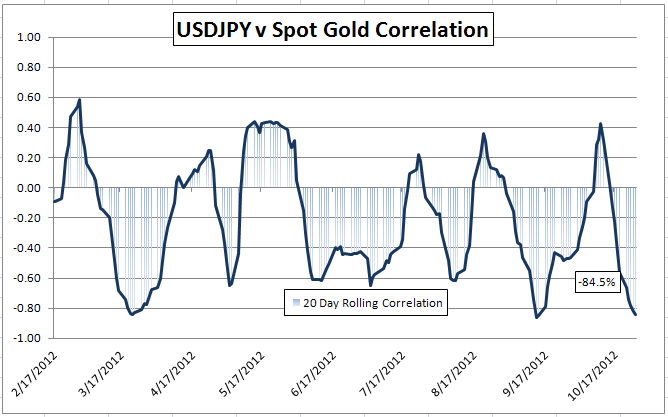