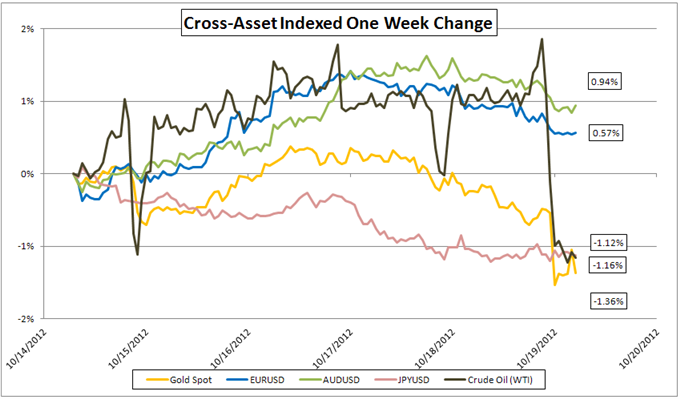 The Takeaway: Gold’s short term correlations have against hit a high, closely tracking against the dollar with the Euro, pound and yen. With major US data and economic events scheduled this week, including a FOMC meeting on Wednesday, hawkish commentary and stronger data may drive the dollar against all counterparts, including gold.

Weekly Commentary: Gold lagged behind major counterparts for the early part of this week. A relatively risk-positive week for assets and higher yielding currencies meant weaker demand for the zero-yielding gold. Despite that, gold fell in-line with the large drop originating from the US equity markets on the heels of weaker earnings reports from non-financial firms, notably Google, McDonalds and GE, shedding 1.16% for the week.

As gold is still negatively correlated with the strength of the US dollar, traders will be focusing on US data for the next week. The US economic docket will start with the penultimate FOMC meeting of 2012 on Wednesday, continuing with September durable goods orders and weekly jobless claims on Thursday and culminating with advance 3Q reports of US GDP on Friday. The final revision for October of University of Michigan’s consumer confidence index, currently at a two year high, is not expected to move markets. Traders will also be actively monitoring any possible requests of aid from Spain, which could be a driver for higher risk appetite, the Euro and gold.

Gold’s performance next week may continue to reflect its performance for the past weeks after the Federal Reserve’s QE3 purchasing of mortgage backed securities, and indicating employment numbers as the primary driver of the stimulus program with no set end date. The string of better data from the United States may put downward pressure on the yellow metal, as stimulus expectations from the Fed are diminished. However, as volume is expected to be relatively low as markets wait for the Central Bank, gold and other risk assets may have time to capture additional gains. 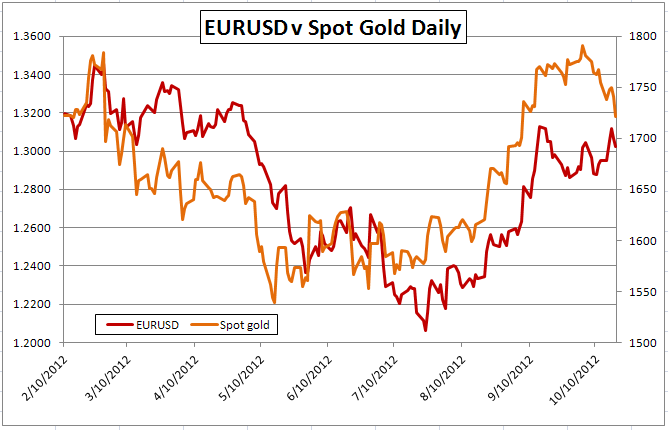 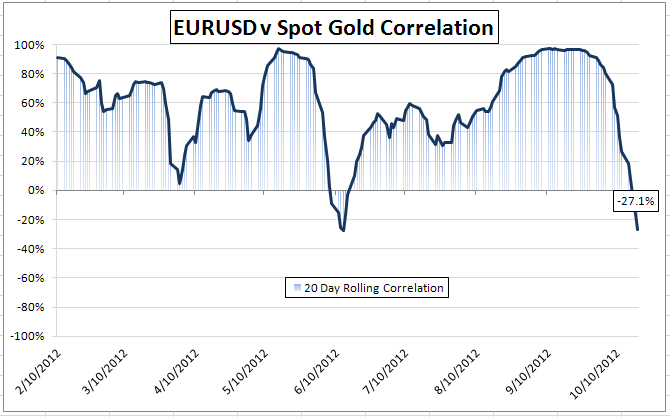