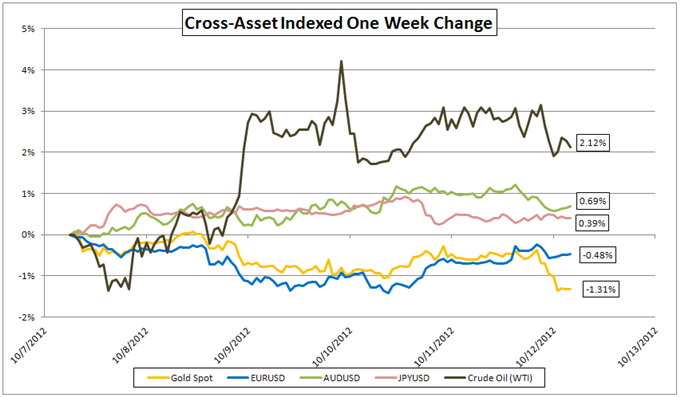 The Takeaway: With markets closely following developments in Spain and watching better data in the United States, gold has become the exclusive counterpart to the US dollar and US data. Friday’s blowout University of Michigan consumer confidence data further sapped expectations of additional Fed stimulus, and with US Q3 earnings expected in the next days, gold’s performance may again solely rely on the prospects in the United States.

Weekly Commentary: Gold was hit this week on two occasions: first on Thursday’s sharp improvement in weekly initial jobless claims, falling from 369K to 339K and Friday’s University of Michigan’s consumer confidence report, rising from 78.3 to 83.1, the highest level since late 2007. Both events represent aspects closely watched by the Fed with regards to additional stimulus: employment and consumer spending. With the remarkable improvement, markets cut back their view for further easing, hurting demand for the store-of-value yellow metal.

Events emanating from Europe were not replicated this week in gold markets. The Euro continued to be driven by developments in Spain, including a possible request for a bailout and S&P’s downgrade of Spanish sovereign debt to one notch above junk. This downgrade may prove to be problematic for the Iberian nation as it is scheduled to sell 2, 3 and 10 year bonds on Thursday, October 18th. There will also be a EU summit from October 18th to October 19th, stoking expectations that Spain may announce asking for a bailout then.

Gold traders may be busy watching equities markets this week, as 3rd quarter earnings reports kick into full gear on Monday. Major financial firms including Citigroup and Goldman Sachs will fill the docket for the first two days, while Google and Microsoft will round out the week. Traders will also be focusing on the rounds of Chinese data, including CPI and PPI on Tuesday and the critical GDP data on Thursday. 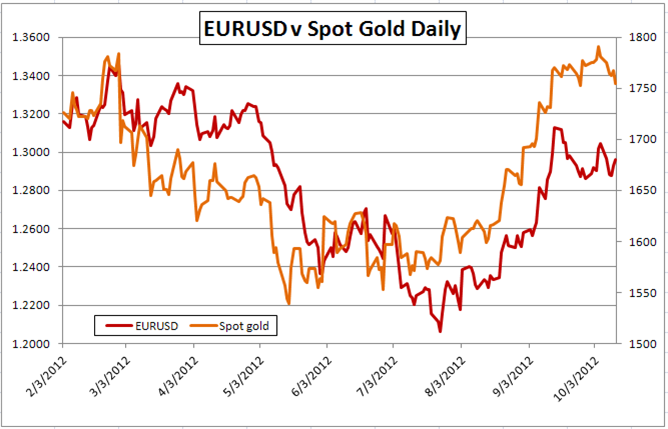 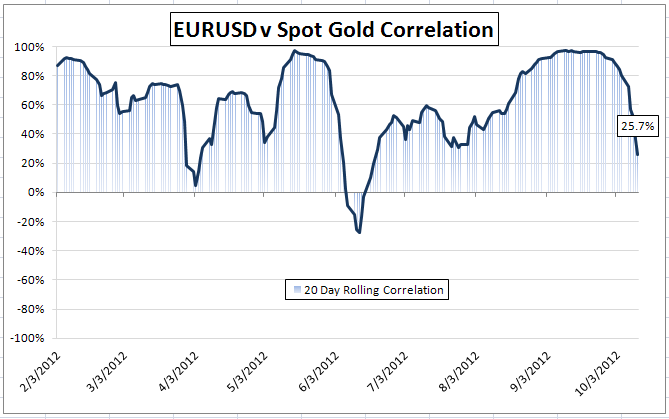