US Election Risk on the Rise

In recent weeks, there has been a noticeable step up in hawkish rhetoric towards China from the Trump administration, which has led to rising fears that the US may take action against China over the spread of coronavirus. With that said, the tensions between the US and China are likely to pick-up ahead of the election (anti-China sentiment a possible election campaign). Consequently, the Chinese Yuan will become increasingly important in not only driving broader sentiment but also a source of boosting volatility. In turn, with a greater focus on Yuan, this will undoubtedly place both the AUD and NZD under more scrutiny given that they are largely seen as a liquid proxy to Chinese sentiment.

Given that both the AUD and NZD had been among the outperforming currencies in April, risks are thus asymmetrically tilted to the downside, perhaps more so with the New Zealand Dollar amid increased negative rate talk. Another point to add is that both currencies typically underperform during May. With that said, while it is that time of the year that seasonal trends are increasingly spoken about (“Sell in May Narrative), much like other humans biases such as the round-number bias, I am open-minded. 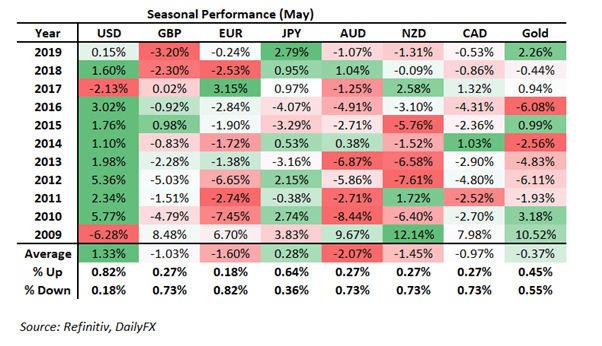 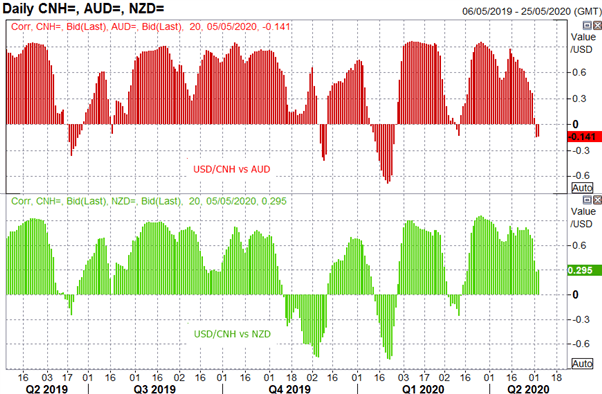 With Chinese market participants away, given the market holiday, the offshore Yuan (CNH) is trading at its largest discount (700pips) to the onshore (CNY) since the beginning of 2016. As such, with China returning from its elongated break, eyes will be on the Yuan mid-point overnight. Signs that China is content in allowing the Yuan to depreciate would leave topside resistance in USDCNH exposed at 7.16 where a breakthrough would leave both emerging and commodity currencies vulnerable. 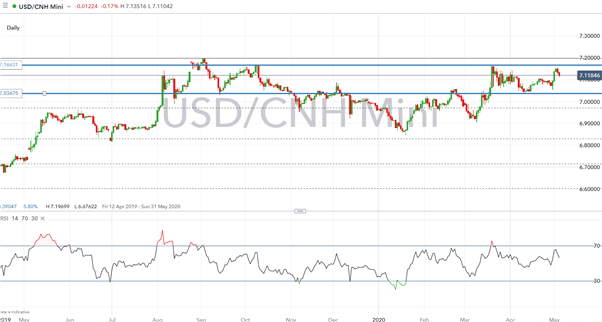