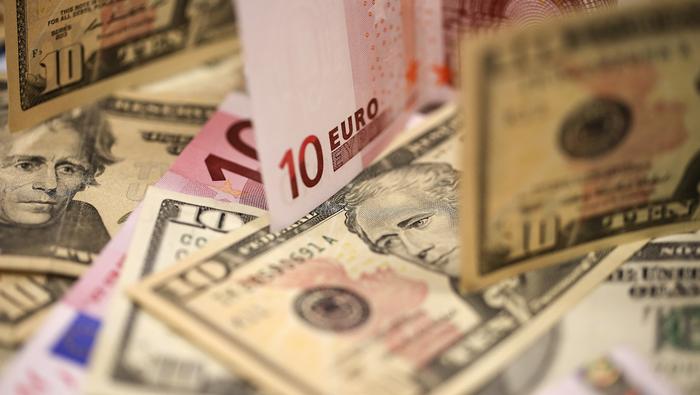 The EUR/USD had a mixed performance on Monday in midday trading, oscillating between small gains and losses near 1.0210 amid conflicting forces pulling prices in opposite directions. On the one hand, U.S. dollar softness supported riskier currencies to some extent, but on the other hand, news that Gazprom will reduce gas exports flowing to the Eurozone via the Nord Stream pipeline to 20% of capacity held back the euro. While the European energy crisis is likely to dominate the headlines in the near term, there is another important catalyst to watch this week that may trigger volatility and set the trading tone for EUR/USD: the Federal Reserve's monetary policy decision on Wednesday.

To provide some context, the Fed has acknowledged that it waited too long to begin removing policy accommodation in the face of runaway inflation. To make up for lost time, the institution has adopted a very hawkish bias, raising rates forcefully in recent months. Judging from recent communication, policymakers are willing to tolerate some economic pain during the process to restore price stability, suggesting that the current slowdown in business activity will not prevent them from proceeding with their tightening plans.

This begs the question: what should traders expect at this week's Fed meeting - will the bank deliver another 75-basis point interest rate increase, identical to the one in June, or will it surprise Wall Street with a full-percentage point adjustment following higher-than-forecast CPI readings?

After inflation hit a new multi-decade high last month at 9.1% year-over-year, the market briefly braced for the possibility of a 100 basis point raise at the July meeting, but several officials, including Christopher Waller and James Bullard, two well-known hawks, poured cold water on the idea before the black-out period began. If policymakers were interested in going bigger, they would have used speaking engagements to prime markets for a more front-loaded response. That clearly did not happen.

The most likely outcome is then a 75-basis point hike, which would put the federal funds rate in the 2.25%-2.50% range, around what most participants consider to be the neutral rate. This scenario is already largely discounted, so traders should focus on the statement forward guidance and Chairman Powell's press conference.

With inflation expectations heading lower and CPI expected to ease in the coming months amid falling commodity prices, there is no reason for the central bank to become incrementally more hawkish, especially as the economy may be on the verge of recession. This means “peak Fed hawkishness” has likely passed, taking a powerful bullish catalyst away from the U.S. dollar. While the greenback may still strengthen from time to time on risk-off sentiment brought on by recession angst and the energy crisis in Europe, it may not be able to replicate the vertical rally it has experienced this year.

All in all, the FOMC is poised to deliver another jumbo rate hike this week. The move is already discounted, so it is unlikely to be a significant source of strength for the U.S. dollar. Against this backdrop, it would not be surprising to see a "buy the rumor, sell the news" type of episode later this week, with the U.S. currency depreciating against majors. This could mean that the EUR/USD could trade higher in the near-term, provided that the energy crisis does not worsen in the eurozone.

EUR/USD briefly fell below parity earlier this month, but failed to close below that key psychological level, with bulls resurfacing and triggering a rebound off channel support as seen in the daily chart below. From those days, the pair has risen more than 200 pips, but the recovery has stalled near 1.0270/1.0300, a key resistance to watch. If buyers manage to clear this area decisively in the coming sessions, upside momentum could strengthen, paving the way for a move towards 1.0350, followed by 1.0450, where the 50-day simple moving average converges with the descending channel’s upper trendline.

On the flip side, if prices are rejected from current levels, initial support appears at 1.0130, but if this floor is ultimately violated, traders should brace for the possibility of a retest of the 2022 lows slightly below parity. 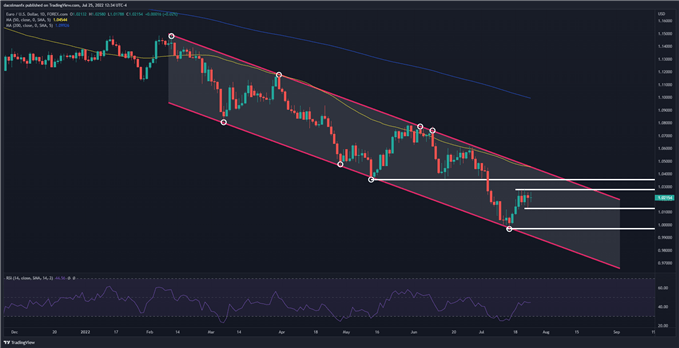