More Than a Countertrend Rally?

It was in late-May when news has emerged from China that officials would take steps to curb “unreasonable” price appreciation in industrial metals by releasing inventories. However, as delta variant concerns have risen in recent weeks, rumors have emerged that China would cease such a policy.

Instead, with copper inventories in China falling back last week - by 8,900 metric tons to 150,800 metric tons – it appears focus is returning on the supply-demand deficit. Overall, the global surplus is waning, on a year-over-year basis: according to the International Copper Study Group’s (ICSG) latest bulletin, the market had a 80,000 ton surplus through the first five months of 2021 compared to a 121,000 ton surplus during the same period in 2020.

The shifting narrative around the supply-demand picture has created an opportunity whereby copper traders may be able to retake the pandemic uptrend, which would keep intact the prospect of a multi-month bull flag forming – and if viable, another jaunt to all-time highs. 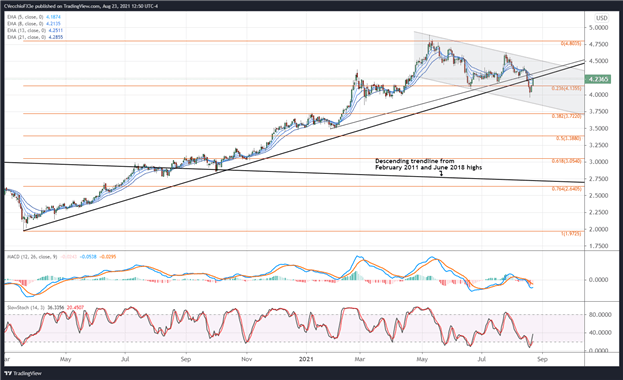 The line in the sand is clear for copper prices in the near-term: 4.2700 by the end of August. By reclaiming said figure before month’s end, copper prices would be back above their pandemic uptrend, suggesting that a false bearish breakout had transpired. Moreover, as previously noted, it would mean that the multi-month bull flag is still intact after rebound at the 23.6% Fibonacci retracement of the 2020 low/2021 high range at 4.2000.

Momentum indicators are just starting to turn. Copper prices are above their daily 5- and 8-EMAs, but still below their daily 13- and 21-EMAs. Daily MACD’s descent below its signal line is abating, while daily Slow Stochastics have already rebounded from oversold territory (yet remain below their signal line). 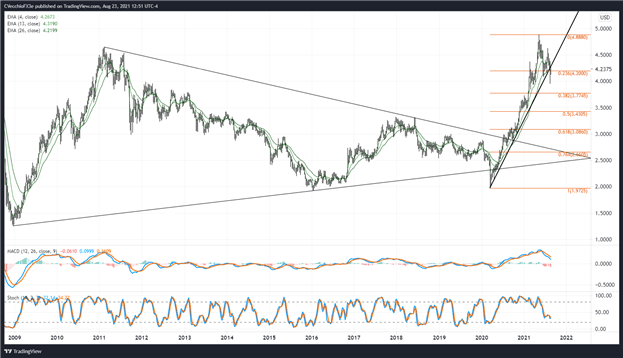 As has noted in July, “copper prices’ breakout above the descending trendline from the February 2011 and June 2018 highs suggests that a multi-year bottoming process commenced in mid-2020. This point of view is reinforced by the failed bearish breakout in early-2020, which saw the multi-year symmetrical triangle support temporarily lost for a few weeks. Clearing the June 2018 high officially ended the multi-year series of ‘lower highs and lower lows.’ As long as the uptrend from the March and October 2020 swing lows is maintained, copper prices retain a bullish bias.” A return to a bullish bias for copper prices may soon be around the corner – if 4.700 is achieved.