US Dollar: The Case for Near-Term Recovery vs. Most Major Currencies

Markets spent the first three months of the year putting to bed the near-term threat of a credit crunch courtesy of the Eurozone debt crisis. As we enter the second quarter, the outlook for global economic growth is reasserting its position as the dominant driver of financial markets, and the picture is far from rosy. By most estimates the Eurozone – collectively the world’s largest economy – is already in recession. This is echoing in expectations of a slowdown in China, the world’s third most significant growth engine, for whom the regional bloc is the top export market. The sole bright spot is the US, where a cautious recovery appears to be gaining momentum, with the top consideration now being the extent to which a healthier North America can offset malaise elsewhere.

So far, the roundup of manufacturing PMI reports unveiled in the first 24 hours of the trading week appears supportive. While Eurozone data showed the factory sector shrank for the eighth consecutive month and a jump in Chinese manufacturing growth appeared suspect at best, a strong print on the US ISM factory-sector activity gauge kept risk appetite firm and the safe-haven US Dollar on the defensive. Looking ahead however, there is reason to suspect sentiment may come undone to offer a lifeline to the greenback.

First, minutes from the March FOMC meeting are likely to be interpreted in terms of their implications of QE3 considering the marginal improvement in the Fed’s appraisal of the recovery has had three weeks to be amply priced in already. This means traders’ primary concern will be the likelihood of additional stimulus and a sense of what kind of environment is needed to produce it. Recent commentary from Fed officials suggests the bar for another expansion of the balance sheet has been set rather high. Looking further ahead, the Non-manufacturing ISM component is expected to show US service-sector growth slowed in March while Friday’s closely-watched Employment report shows nonfarm payrolls grew by just 205k over the same period, marking the weakest jobs growth in four months.

On balance, this opens the door for the return of risk aversion, pointing to downward pressure on cycle-sensitive Australian, Canadian and New Zealand Dollars where prices continue to track closely with MSCI World Stock Index (a proxy for global sentiment trends). It likewise bodes ill for the British Pound, where risk trends are likely to remain in control as the Bank of England rate decision proves to be another non-event. Indeed, BOE Governor Mervyn King and company will most probably remain on the sidelines until February’s QE top-up is fully realized and an updated inflation report produced in May. For the Japanese Yen – where prices continue to track US Treasuries – the environment we envision provides room for a deeper pullback as bond prices rise and yields pull back (although this may prove somewhat limited in scope on fading QE3 bets).

Turning to the Euro, things get a bit murky. EURUSD price action flat-lined over the past week and correlation studies don’t reveal a clearly dominant bearing from the rates outlook or sentiment trends (see chart below). In trend terms however, the influence of risk appetite appears to be waning and that of policy expectations firming. That cautiously hints at a downward bias as final March composite PMI data points to continued sector-wide contraction while the European Central Bank is kept on hold by elevated inflation readings, meaning rate cuts will need to be more aggressive later in the year. Indeed, Thursday’s rate decision seems unlikely to produce much of anything beside familiar rhetoric highlighting improvements on the debt crisis front, which ought to prove surprising for investors. 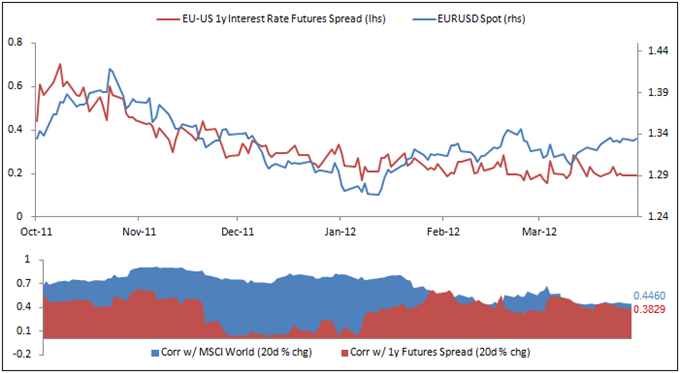 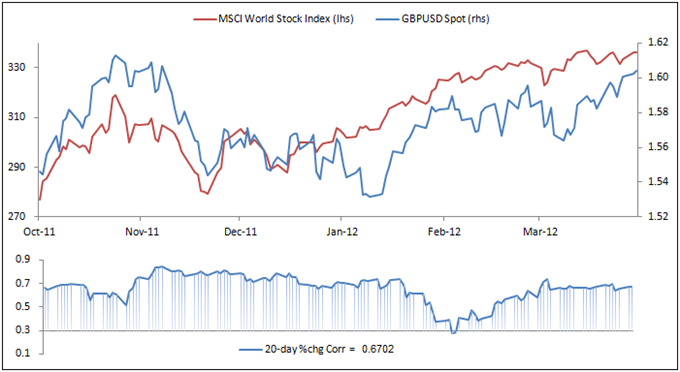 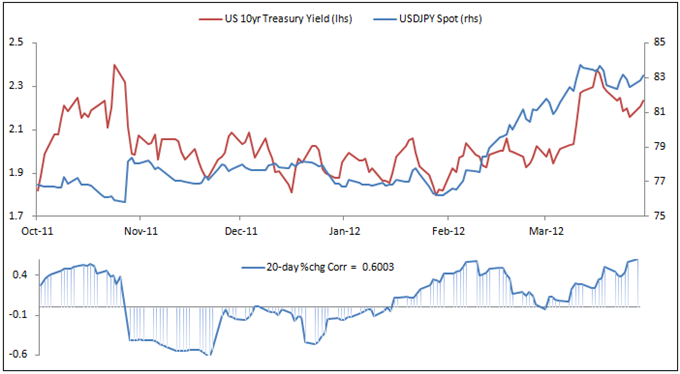 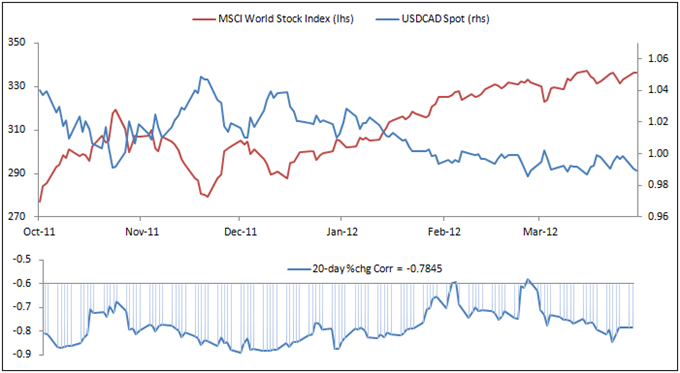 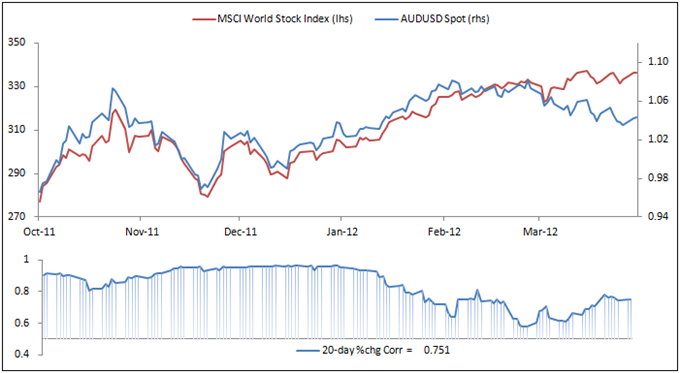 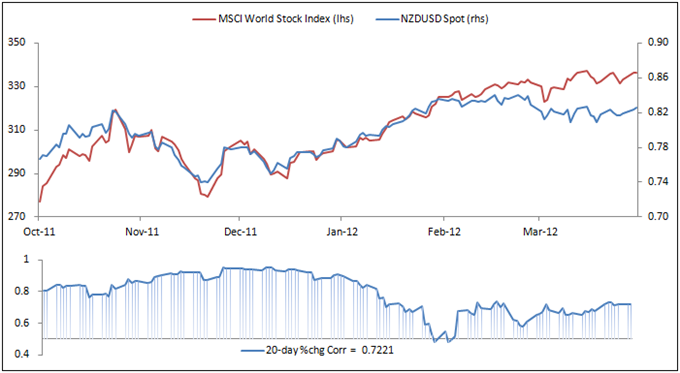