US Dollar Aims for Broad-Based Recovery in the Week Ahead

After weeks of preoccupation with Greece and its second bailout package, the Euro appears all but ready to move on. Indeed, traders seemed to resign to the inevitable as early as Wednesday, realizing the ECB had lent banks enough capital via December's LTRO to ensure a credit squeeze would be averted even if Greece defaulted. The next hurdle was to convince investors that similar provisions would be in place if stress were to emerge in a larger country (specifically, Italy). The ECB rate decision saw policymakers make headway on this front as well, with the bank relaxing collateral requirements for its next LTRO due later this month. This opens the door for more capital to be injected into a wider swath of the banking sector, reinforcing lenders' war chest and soothing jittery investors.

Importantly, this hardly guarantees a favorable outlook for the single currency. With the credit crunch time-bomb defused for now, the focus turns to growth, where the picture is far from pretty. Economists’ forecasts suggest the Euro zone will be the only G10 economy to sink into recession this year. This beckons further monetary easing. Indeed, considering the goal of LTRO operations is an easing of credit, its impact on the exchange rate can be expected to be essentially the same as the affect of the Fed’s QE efforts on the US Dollar. Needless to say, this bodes ill for the single currency. With that in mind, the spotlight is on fourth-quarter Euro Zone Gross Domestic Product figures next week, where expectations are for output to drop 0.4 percent to mark the first contraction since the region emerged from the Great Recession in mid-2009. The German ZEW gauge of investor confidence is also on tap.

The Japanese Yen is beginning to regain its correlation with the spread between domestic and US 10-year bond yields (see below). With Japanese monetary policy effectively locked in place, traders will be looking to the US for direction cues. Minutes from January’s Federal Reserve policy meeting will be in focus as markets size up the outlook for a third round of quantitative easing. Friday’s Consumer Price Index report will be judged in the same light. A perception that more stimulus may not be as assured as it appeared in the announcement’s immediate aftermath likely pressure Treasury yields and USDJPY higher. Alternatively, signs bolstering the case for QE3 are expected to have the opposite effect, although the downside remains broadly capped by Japan’s “stealth” intervention efforts.

The British Pound appears vulnerable in the week ahead as economic data reinforces the case for the latest expansion of quantitative easing by the Bank of England. Inflation is expected to slow to the weakest in 14 months while the Claimant Count – a proxy for the unemployment rate – is forecast to hit 5.1 percent, the highest since mid-1997. While the Pound rose immediately the BOE announcement as the asset purchase target increased in line with expectations, putting to rest rumors of a larger expansion, the longer-term implications of further sterling dilution appear negative.

The Australian, Canadian and New Zealand Dollars continue to show strong links with stock prices (although the strength of correlation readings has weakened somewhat), meaning risk appetite remains in control. On balance, this does not seem supportive. With Eurozone-triggered credit crisis fears unwinding and the global growth outlook creeping back into focus, the cycle-sensitive currencies may come under increasing pressure as traders are reminded that economists’ median world GDP expectations for 2012 have been sinking precipitously since early August. 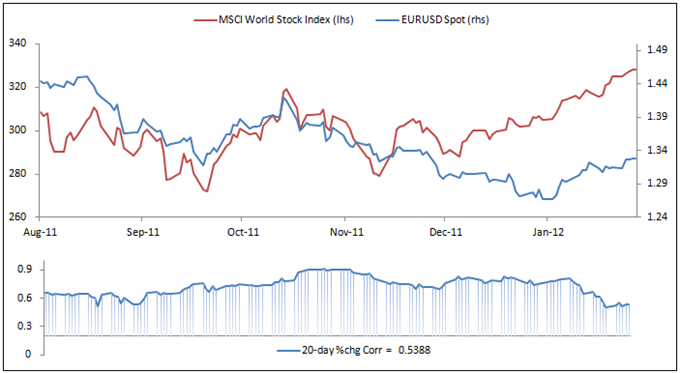 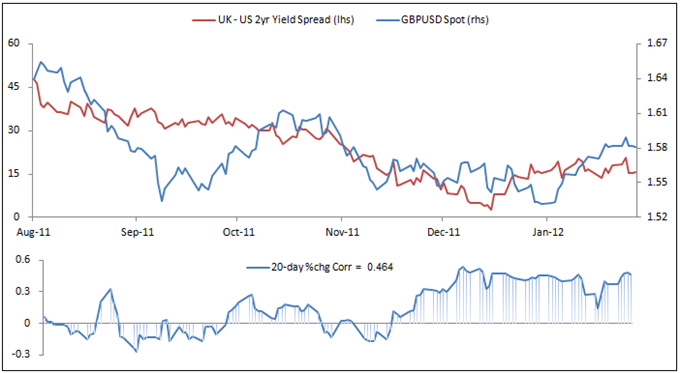 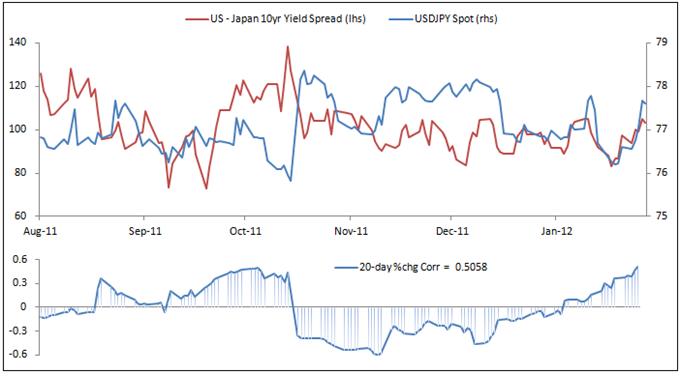 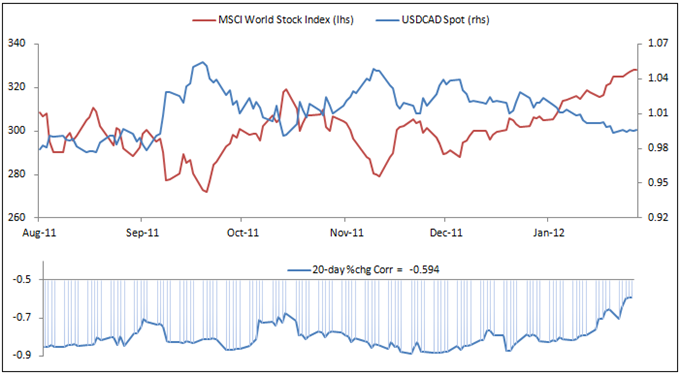 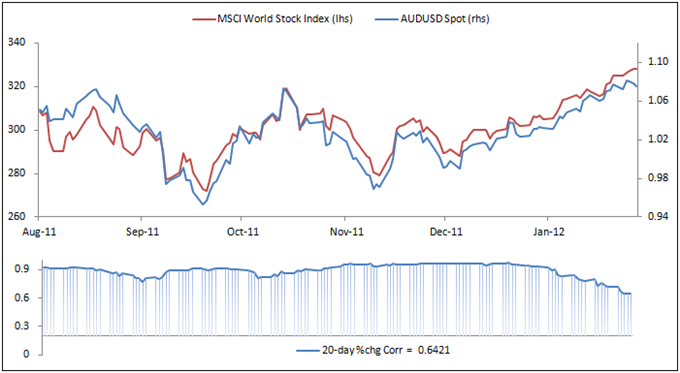