EUR/USD: Euro to Fall with Stocks on US Debt, Global Growth Fears

With sovereign fears on the decline in the Euro Zone after an unexpectedly bold EU leaders’ summit outcome last week, the US debt ceiling fiasco has taken center stage as the core macro-level issue guiding sentiment over the near term. Negotiations on the so-called “Gang of Six” bipartisan initiative that would trim $3 trillion from the shortfall over the next decade broke down on Friday as House of Representatives Speaker John Boehner walked away from negotiations, saying he was unwilling to sign off on tax increases envisioned in the deal. Talks over the weekend appear to have proven no more fruitful. Continued brinksmanship will feed uncertainty and weigh on stock markets, which correlation studies suggest will once again translate into gains for the US Dollar and push EURUSD lower. Needless to say, the emergence of a viable solution is thereby likely to have the opposite effect.

The landscape will be complicated by a busy US economic data calendar, with the Fed Beige Book survey of regional economic conditions and the second-quarter GDP report taking top billing. Evidence of a broad-based slowdown in global growth is piling high as all three leading output engines – the US, the EU and China – show acute signs of weakness. With US output expected add 1.8 percent, marking the softest reading in a year, that narrative will be reinforced further and add to upward pressure on the greenback as market confidence sours. On the local data front, German Unemployment as well as the preliminary set of July Consumer Price Index figures for the Euro Zone’s top economy and the region as a whole headline the calendar. 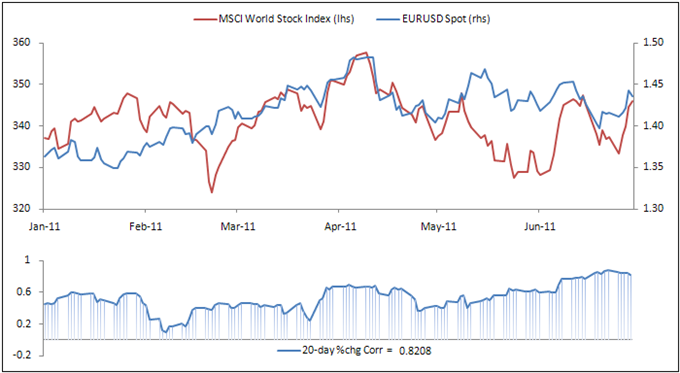 While the correlation between GBPUSD and the MSCI World Stock Index remains the most pronounced of the conflicting catalysts driving the British Pound, the domestic data docket seems likely to prove at least as important early in the week as the second-quarter Gross Domestic Product reading crosses the wires. Expectations call for output to add 0.2 percent on a quarterly basis while the annual growth rate slows to a paltry 0.8 percent, the weakest since the UK emerged from the Great Recession a year ago. The result is likely to weigh further on BOE interest rate hike expectations. The risk-averse cues already evident in price action would only find reinforcement from the report, hinting Sterling may find itself facing stiff selling pressure in the days ahead. 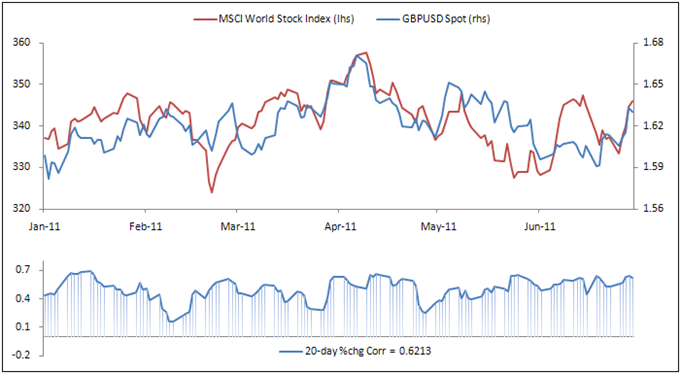 The spread between US and Japanese 2-year Treasury bond yields remains the core driver of USDJPY. With no serious waves likely to be made in the outlook for Japanese rates, this puts the onus on the US portion of the rates differential. As before, this points toward the lingering US debt ceiling debate and the second-quarter corporate earnings reporting season.

Risk aversion emanating from uncertainty amid continued standstill on the US debt front is – somewhat counter-intuitively – drive safe-haven demand for Treasuries and weigh on their yields as prices rise, pressuring USDJPY lower in the process. A palatable solution would naturally produce the opposite effect.

On the earnings front, the reports of growth-sensitive firms such as industrials and basic-materials producers are likely to prove most important, amounting to a referendum on global growth prospects amid increasingly compelling evidence of a slowdown on tap in the second half of the year. For the same reason, Wednesday’s Fed Beige Book survey of regional economic conditions and Friday’s second-quarter US GDP report ought to prove of interest. 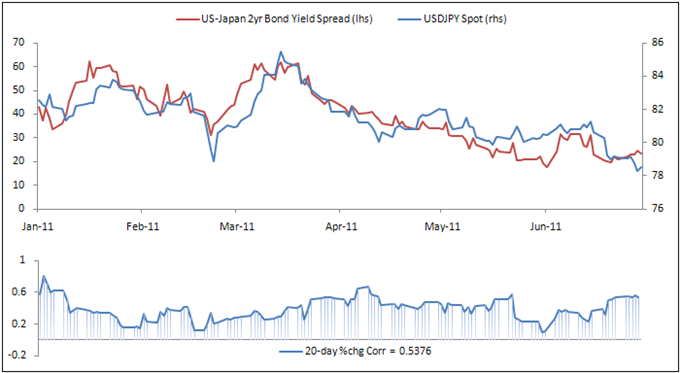 The so-called “commodity bloc” currencies remain firmly anchored to stock markets, reflecting a shared sensitivity to the trajectory of global economic growth expectations. As with the Yen, this puts the US debt ceiling debate and the second-quarter earnings season firmly in focus, with prices tracking the ebb and flow of broad-based risk sentiment.

The Reserve Bank of New Zealand interest rate decision as well as Australian CPI and Canadian GDP figures headline the local economic calendar. The RBNZ announcement seems likely to produce the most fireworks, with the recent string of strong economic data fueling expectations of a hawkish shift in rhetoric that prepares the market for a faster reversal of the 50bps cut enacted in March than the early-2012 assumption everyone had been working on. The Canadian GDP outcome ought to prove telling as well considering recent data has been somewhat mixed of late. Australian CPI is expected to post a modest increase – something already predicted by the RBA – and is unlikely to meaningfully buoy the rates outlook. 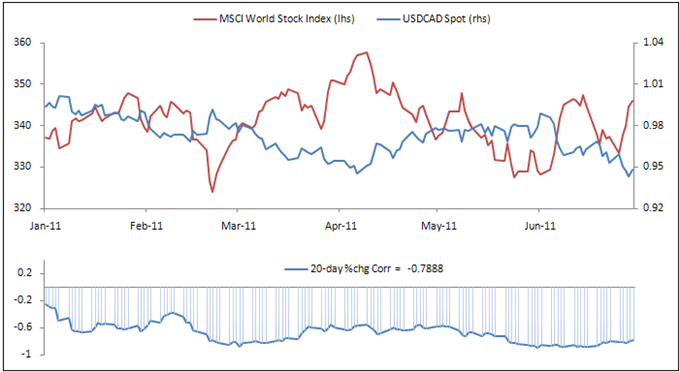 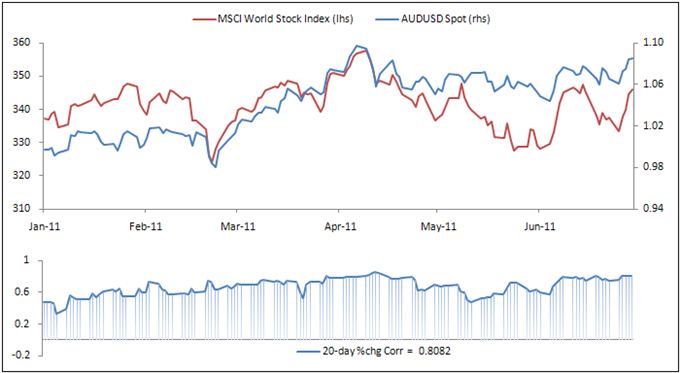 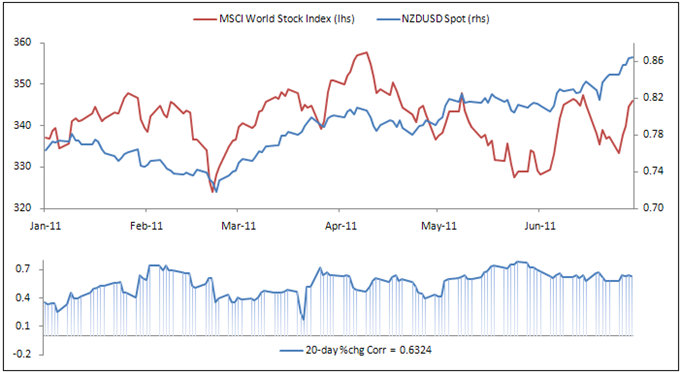