EUR/USD: All Eyes on Italy as Debt Crisis Continues to Spread

The centrality of the Euro Zone debt crisis for overall market sentiment continues to assure a firm link between EURUSD and the MSCI World Stock Index, a proxy for broad-based trends in investors’ optimism. Contagion fears are growing as the turmoil spreads to Italy – the third-largest economy in the currency bloc that is almost certainly beyond the scope of a rescue through the existing EFSF bailout fund – as political infighting between Prime Minister Silvio Berlusconi and Finance Minister Giulio Tremonti threaten to derail the passage of a 40-billion euro deficit-reduction plan. The spread between benchmark German and Italian 10-year bond yields has grown to a record-high 244 basis points, reflecting the increasingly high premium the markets are requiring to lend to the Mediterranean country. The issue may come to a head as Italy auctions off a tranche of 2016-2026 bonds on Thursday.

The overall macroeconomic landscape is also far from encouraging. Hopes were running high ahead of last week’s US employment report after a series of encouraging leading indicators suggested the world’s largest economy was finding its feet even as China and Europe (the other major engines of global growth) stumbled. Those hopes have now been tarnished after official labor-market figures fell dramatically short of expectations. While employment is typically late to rebound in an economic upswing, meaning Friday’s report is reflecting a lag amid otherwise improving conditions rather than anything more ominous, investors faced with an already difficult environment seem likely to take a defensive approach and assume the worst until proven otherwise. A busy docket of US economic data may alter the landscape in the days ahead, but risky assets ought to start the week under pressure, compounding pressure on the Euro. 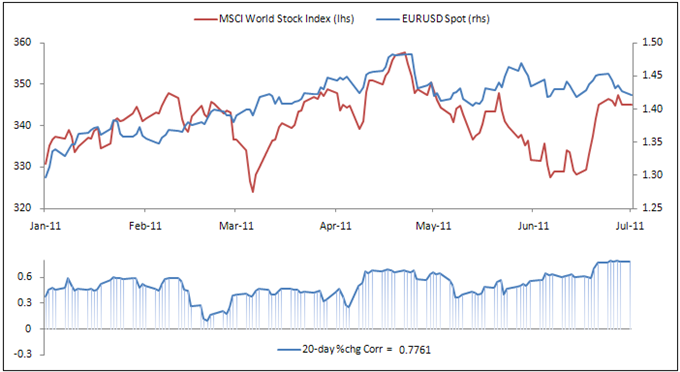 Correlation studies suggest interest rate expectations are back in focus for the British Pound, but firm standstill on the part of the Bank of England suggests the spotlight will be on the US side of the equation. The UK data set on tap this week appears likely to reinforce the status quo as inflation holds unchanged at 4.5 percent while the Claimant Count, a proxy for the unemployment rate, pushes upward to register the highest reading since April 2010. This means that – as with sentiment trends – the focus falls squarely on the docket of top-tier US economic data releases on tap ahead.

On balance, expectations suggest this may point the way lower for GBPUSD: US Retail Sales and are expected to grow at an annual pace of 8 percent, the fastest in four months, the CPI report is forecast to put core inflation at the fastest since January 2010, and Industrial Production as well as the University of Michigan consumer confidence readings are set to rebound. Minutes from June’s FOMC policy meeting seem unlikely to cause much of a stir considering their contents have likely been priced in already having emerged in Fed Chairman Bernanke’s post-announcement press conference. However, the Euro Zone debt crisis is a wild card, with growing stress within the currency bloc promising to underpin Sterling as a regional alternative to the single currency. 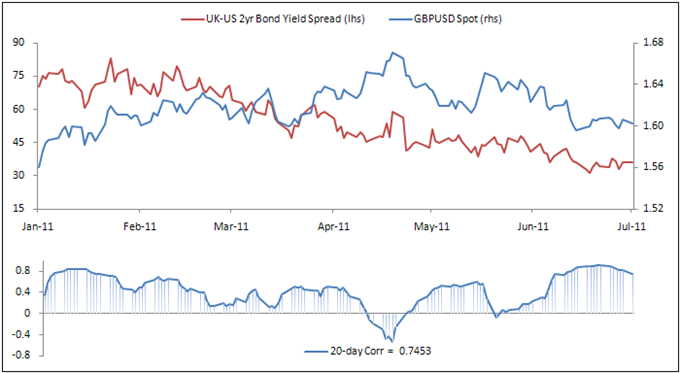 The spread between US and Japanese 2-year Treasury bond yields remains the core driver of USDJPY. As with the Pound, this puts the onus on the US economic calendar and its implications for the path of borrowing costs in the world’s top economy. The Euro Zone crisis may also prove to have indirect consequences: if risk aversion continues to gain momentum, traders fleeing for the safety of US Treasuries will put upward pressure on bond prices and cap yields, nudging the Yen higher against the greenback. An unwinding of carry trades funded cheaply in the perennially low-yielding currency that tends to accompany deteriorating sentiment could further reinforce this dynamic. 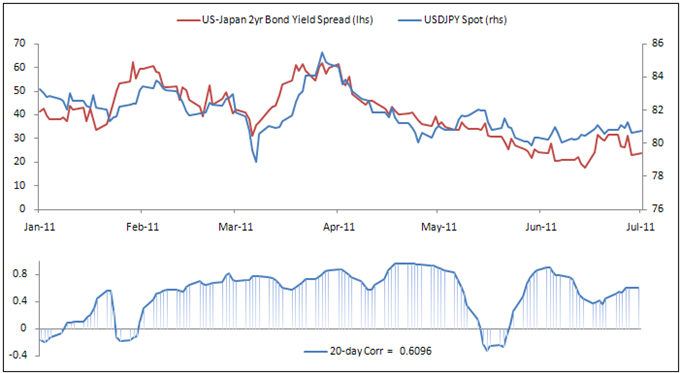 The so-called “commodity bloc” currencies remain firmly anchored to stock markets, the reflection of a sensitivity to the trajectory of global economic growth underpinning the trends driving both sets of assets. As elsewhere, this argues for the centrality of US economic data as well as the evolution of the Euro Zone debt crisis as the key drivers of price action over the coming days. New Zealand GDP figures amount to the only bit of eye-catching local event risk; the report has been delayed twice already, and traders will be keen to size up the final outcome against RBNZ rate hike expectations. 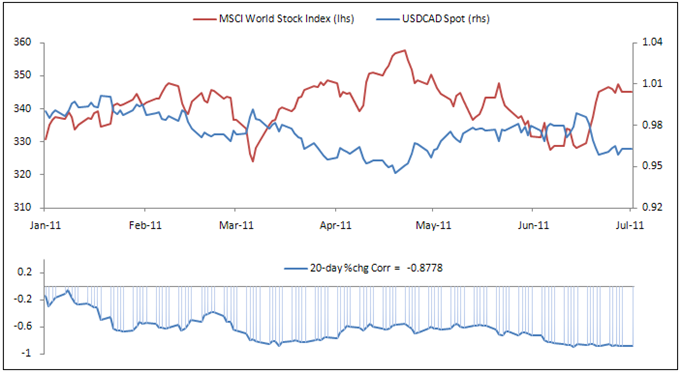 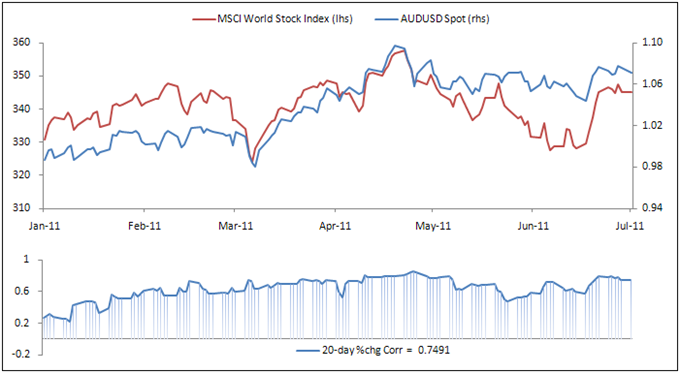 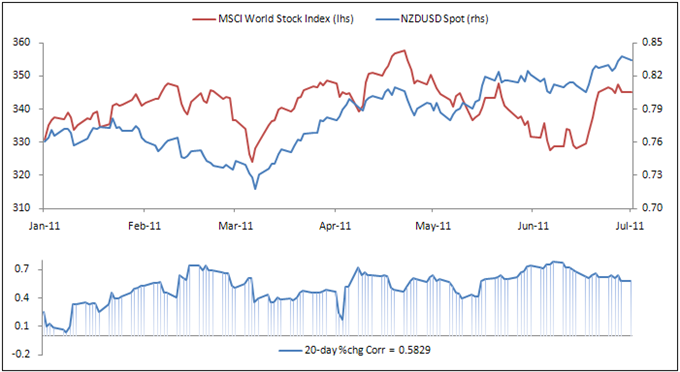