The Euro’s correlation with the S&P 500 remains its most potent relationship, but the strength of the link has waned to reflect the fading importance of the Euro Zone debt crisis for overall investors’ overall sentiment (for which the S&P is a proxy) as well as a shifting of the spotlight onto domestic issues for the single currency. Indeed, with further aid to Greece looking increasingly certain and a weekend election in Portugal producing a strong majority government committed to implementing the budget cuts required to get an EU/IMF lifeline, the single currency has found some home-grown support while broader-based risk aversion has centered on increasingly sour economic data out of the US. The inward focus turns the markets’ attention to the European Central Bank interest rate decision. While the bank is not expected to hike rates this time around, traders will be on the lookout for clues about the timing of the next increase, with any mention of “strong vigilance” vis-à-vis to be interpreted as signaling renewed tightening as soon as July. German Factory Orders and Industrial Production figures round out the economic calendar. 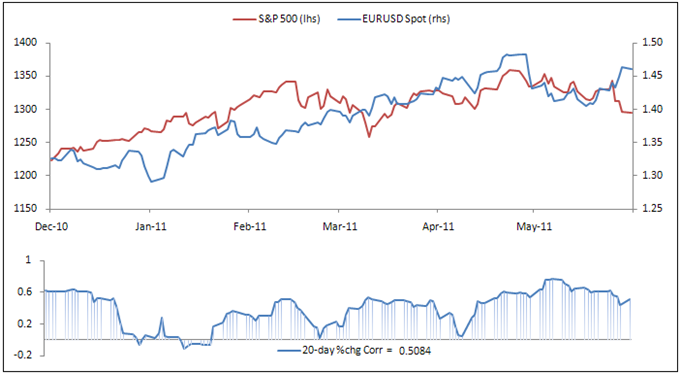 Monetary policy expectations have re-entered the spotlight for the British Pound with the Bank of England due to deliver its monthly interest rate decision. With the possibility of a change in the existing posture virtually nil however, the announcement seems likely to pass with few fireworks, with traders having to wait two weeks for the release of minutes from the sit-down to gauge the new voting pattern on the rate-setting MPC committee now that its top hawk Andrew Sentence has been replaced. Broadly speaking, this seems likely to put Sterling on the defensive against currencies where tightening expectations are robust while giving it a lift against those where the central bank seems more sluggish than Mervyn King and company. In the case of the greenback, much will depend on the rhetoric from Fed officials (Dudley, Plosser, Bernanke) as they give guidance on how the US central bank will reconcile seemingly slowing US growth with the end of the QE2 stimulus program this week. Industrial Production and Producer Price Index figures are also on tap. 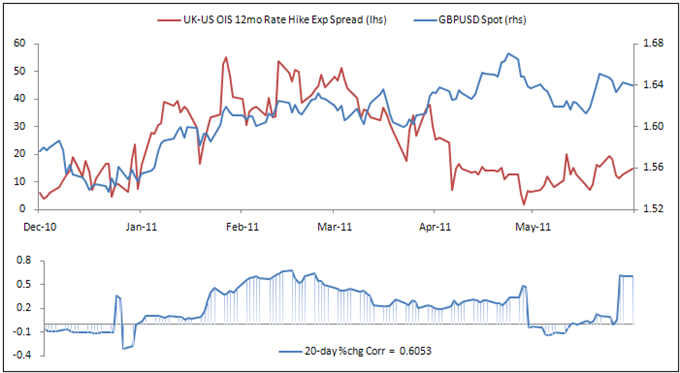 US Treasury bond yields continue to dominate as the leading driver of USDJPY price action, putting the end of QE2 squarely in focus as the Fed completes its final purchase of government debt on Thursday. Intuitively, one would assume yields would rise after the central bank withdraws its intervention and allows the markets to drive direction as traders price in US fiscal stress, but the recent run of poor economic data has kept a lid on rates for now. Looking ahead, a thin US economic calendar means that much of the market-moving information will come from speeches by the Fed’s Charles Plosser, Bill Dudley and Ben Bernanke, the latter clearly dominating the spotlight. An affirmation that the end of QE2 is the beginning of a larger unwinding of stimulus despite disappointing performance in the second quarter is likely to give US yields a boost, pushing the greenback higher against the Yen. 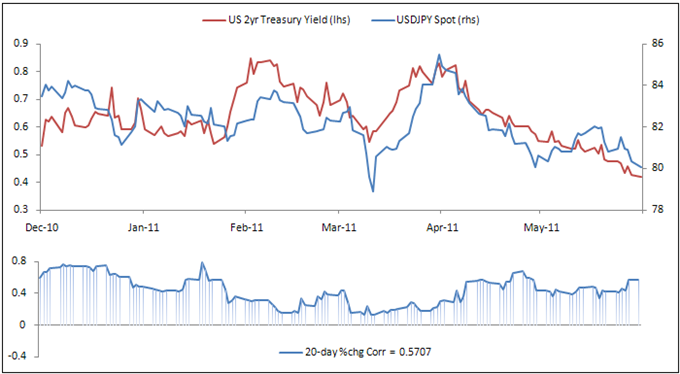 Broadly speaking, the commodity bloc remains anchored to stock markets, putting the focus on the end of QE2, the Fed speaking calendar, and their cumulative implications for US economic growth (long a proxy for the recovery in the world at large). One notable exception here may prove to be the Australian Dollar, where correlations with the S&P 500 have started to wane already as the RBA interest rate decision approaches ahead. Traders will watch the release closely to see if the central bank will build on the mildly hawkish rhetoric that emerged last month, perhaps even signaling another increase in July or August. No such thing is likely for the RBNZ policy announcement, and risk trends seem likely to hold sway over the Kiwi. Canada’s Ivey PMI, Housing Starts as well as Employment figures for the North American country as well as Australia round out top-tier scheduled event risk. 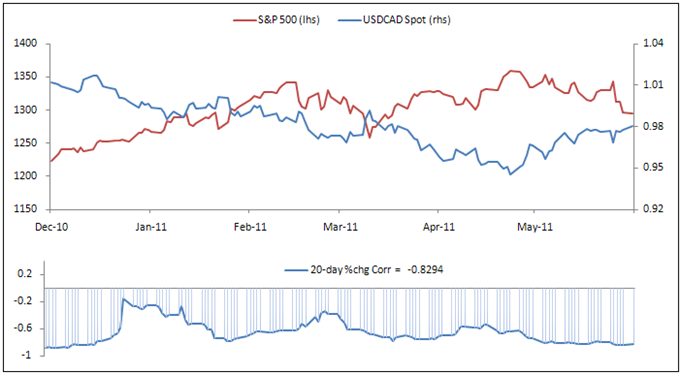 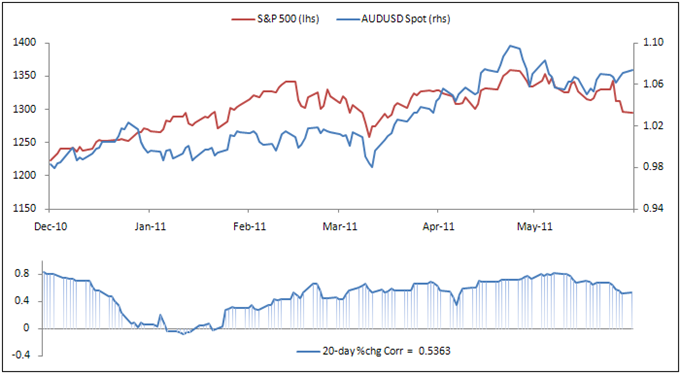 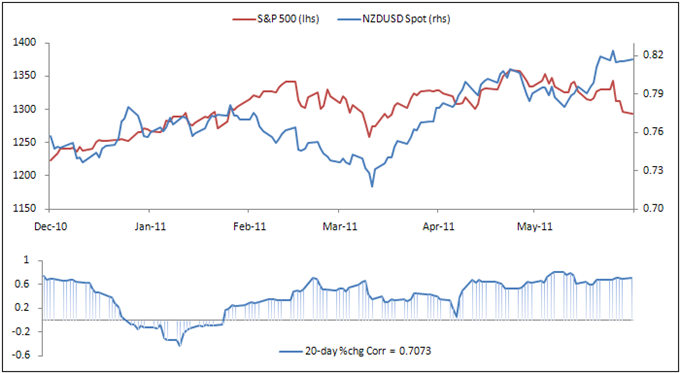