Sentiment trends are firmly in control of currency markets, with all of the majors showing robust correlations with the MSCI World Stock Index (a proxy for investors’ underlying risk appetite). Last week ended on a broadly positive note as the G7 intervened to counter Yen volatility, but the path of least resistance continues to lead lower considering the headwinds facing sentiment remain largely in place.

First, the G7 intervention left the underlying issues present in the aftermath of the Tohoku earthquake unresolved. The casualty tally continues to mount, the extent of the damage and cost of reconstruction is still uncertain, and the threat of disaster at the Fukushima Daiichi nuclear power plant continues to linger even after two of its six damaged reactors have been reportedly brought under control.

Meanwhile, a new phase of the Libyan crisis is unfoldingas the US, UK and France step in militarily to underpin the rebellion against embattled leader Muammar Qaddafi. The action sets an important precedent for future Western involvement in similar scenarios, particularly as protesters face a harsh response in Bahrain. In turn, that uprising is seen by many as a trial run before something similar is attempted in Saudi Arabia, the world’s top oil exporter, and crude prices seem likely to resume their ascent to the detriment of risky assets at the thought that the Kingdom could look like Libya before long.

The Euro’s correlation with underlying sentiment trends continues to strengthen, pointing to the distinct possibility of a reversal lower against a backdrop of Japanese- or Libyan-driven risk aversion. Regional event risk will intersect with broader trends on Friday as EU leaders convene for a much-anticipated summit that is expected to produce a “grand bargain” to structurally address fears of a sovereign default within the common market. As we discussed in detail last week, the preliminary outlines of the scheme amounted to nominal progress but fell woefully short of a true bulwark against further sovereign stress, pointing to a wave of disappointed selling across the spectrum of risky assets if the final version is not substantially strengthened. Preliminary March Euro Zone PMI figures as well as Germany’s IFO Survey of business confidence headline the local economic calendar. 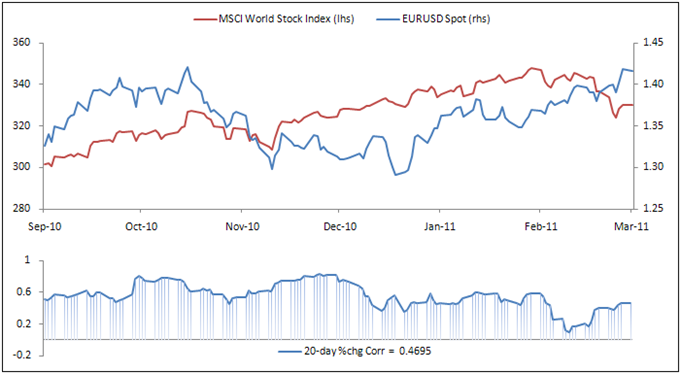 GBPUSD: Sentiment Takes Over as Leading Driver of Price Action

Risk trends have taken a lead role in driving British Pound price action, threatening a reversal lower in the works. With that in mind, price action may turn messy if interest rate hike expectations find renewed momentum as the CPI inflation rate ticks to 4.2 percent, the highest since October 2008, while the Bank of England prints minutes from its last policy meeting. The latter seems especially likely to produce volatility given the possibility (albeit a remote one) that another member of the rate-setting MPC defected to the hawkish camp. 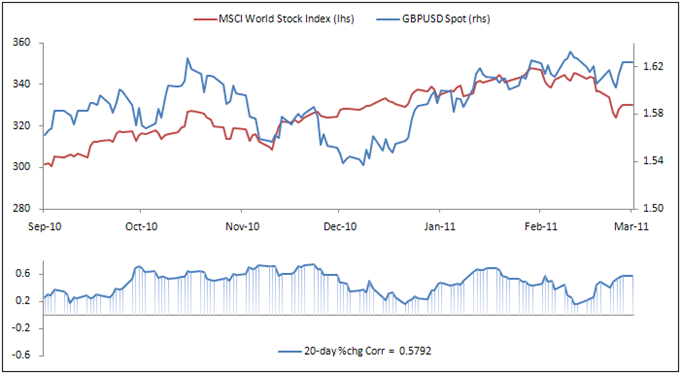 While the outlook for the Yen continues to be clouded by considerable uncertainty, its standing correlation with overall FX market volatility seems to suggest renewed gains if risk aversion returns in earnest as expected. While the threat of intervention is clearly quite real, its aim is unlikely to simply produce a weaker currency. On one hand, a stronger Yen threatens the critical export sector that will be seen as instrumental in helping the economy recover; on the other, the Yen's increasing purchasing power will help to dull the cost of recovery efforts for individual as well as public and private entities considering so many goods and resources in Japan are imported. On balance, this means Japanese officials will look to manage Yen volatility rather than push prices in a given direction, suggesting renewed strength may be allowed to progress undeterred provided it progresses gradually. 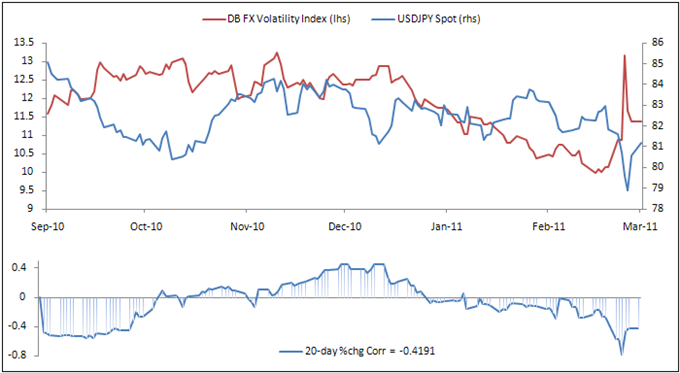 The Canadian and Australian Dollars remain firmly anchored to underlying trends in investors’ sentiment. As with risk appetite itself, this foreshadows a volatile week ahead but ultimately hints at Aussie and Loonie weakness as events in Libya and Japan continue to weigh on confidence. Canadian Leading Indicators and Retail Sales figures top a very slim docket of scheduled economic data releases. 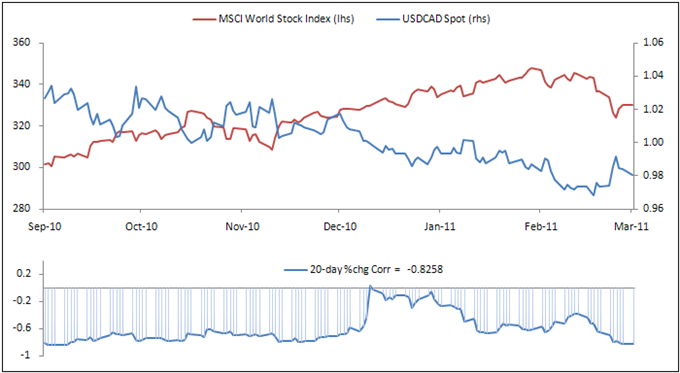 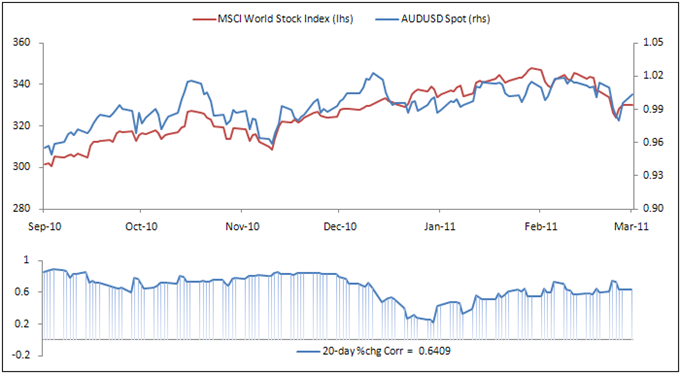 The New Zealand Dollar is increasingly decoupling from the remainder of the commodity bloc, with prices paying closer attention to the outlook for interest rates rather than risk trend at large. Indeed, NZDUSD now shows a formidable correlation with the spread between December US and New Zealand interest rate futures, a reflection of investors’ priced-in monetary policy expectations for the remainder of the year. This puts the spotlight on Wednesday’s fourth-quarter Gross Domestic Product reading. Consensus forecasts point to an increase of 0.1 percent from the three months through September, but even the finance minister has openly acknowledged the risk of a second consecutive quarter of negative growth. This would breed speculation that the RBNZ’s latest rate cut may not have been as temporary as it seemed, pushing the currency lower even if risk trends prove more robust than is expected. 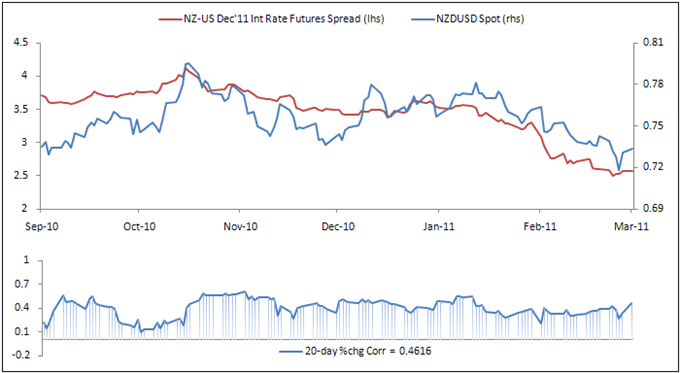