The Euro is quickly rebuilding its correlation with underlying sentiment trends as broad-based risk aversion grips the markets, boosting the safety-linked US Dollar and naturally spilling over into its most liquid pairing. The Tohoku earthquake in Japan and the subsequently looming nuclear meltdown threat are currently at the forefront, but the bears have their pick of reasons to sell as turmoil in the Middle East continues – with the focus expanding from Libya to Bahrain where a joint GCC force has been dispatched to quell unrest – while signs of Chinese economic slowdown are becoming increasingly overt. Risk sentiment and regional fundamentals meet when it comes to the Euro Zone debt crisis, with confidence rightfully shaky after EU policymakers unveiled the outlines of the much anticipated “grand bargain” on dealing with sovereign insolvency fears last week. The scheme amounts to progress and helped to push the Euro higher early in the week, but a careful examination of its provisions reveals it to be woefully inadequate on most accounts, hinting optimism is likely to be short-lived. Euro Zone Consumer Price Index figures as well as Spanish and Portuguese bond auctions top the list of scheduled event risk. 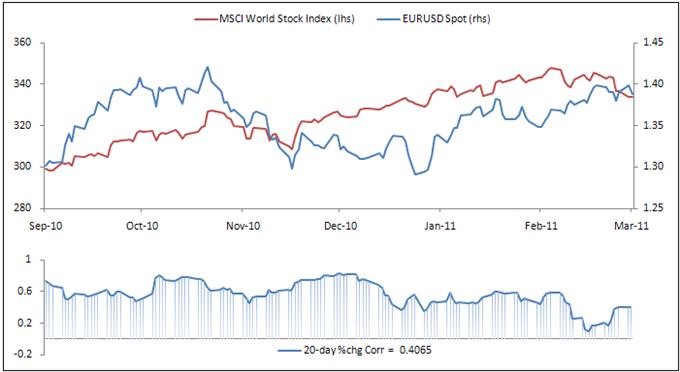 GBPUSD: Sentiment Poised to Take Over as Key Driver of Price Action

Monetary policy expectations remain narrowly dominant as the catalyst driving British Pound price action, with GBPUSD showing a significant correlation with the spread in Federal Reserve and Bank of England 1-year rate hike expectations (as tracked by Credit Suisse). However, risk appetite is quickly emerging as a competing force. Indeed, while sterling’s aforementioned correlation to rate hike bets appears to be fading, its link to the MSCI World Stock Index (not shown) is on the rise and poised to overtake monetary policy as the top item of concern. This makes sense given the lull in fundamental data, with a tame Jobless Claims report amounting to the only bit of top-tier event risk, taken against a backdrop of increasingly acute uncertainty. On balance, this points the way lower, although sterling may find a bit of support as a regional alternative to the Euro if the reason du jour to sell is rooted in the currency bloc’s debt crisis. 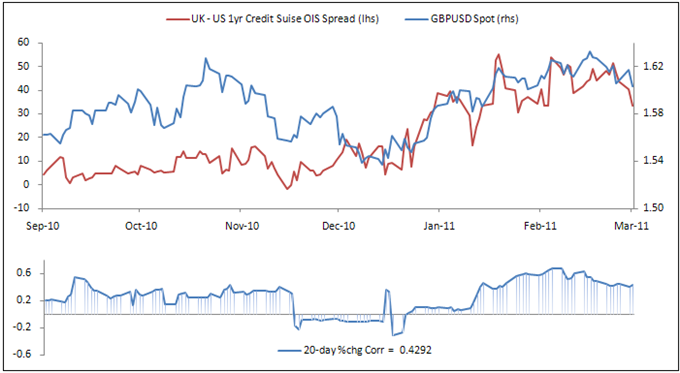 The Yen has strengthened considerably in the immediate aftermath of theTohoku earthquake – the largest in recorded Japanese history - as rising uncertainty spurred repatriation flows, with Japanese investors cashing out across the asset spectrum. This seems likely to continue until the full impact of the disaster is ascertained and a forecast-able set of variables emerges. This presents a clear challenge for Japanese authorities: on one hand, a stronger Yen threatens the critical export sector that will be seen as instrumental in helping the economy recover; on the other, the Yen's increasing purchasing power will help to dull the cost of recovery efforts for individual as well as public and private entities considering so many goods and resources in Japan are imported. On balance, policymakers (who have a well-documented penchant to intervene into FX markets) would be tempted to manage Yen volatility rather than push prices in a given direction, with as-yet unknown results. It can be said howeverthat a period of knee-jerk price action decoupled from the fundamentals is likely ahead. 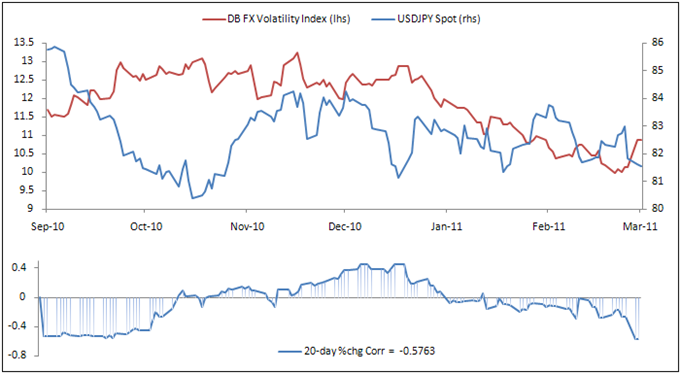 The commodity currencies remain firmly anchored to underlying sentiment (as tracked by the MSCI World Stock Index), with the sharp increase in risk aversion paving the way lower in the week ahead, as markets respond to a plethora of headwinds including Japan’s catastrophic earthquake, Middle Eastern unrest and Euro Zone debt crisis. A slightly more optimistic tone from the Federal Reserve following the monthly FOMC meeting that acknowledges the clear improvement in US fundamentals may allay a bit of the immediate pressure, but this is unlikely to prove lasting considering it would yield little that has not been priced in already. Canadian Consumer Price Index figures amount to the only bit of significant homegrown event risk. 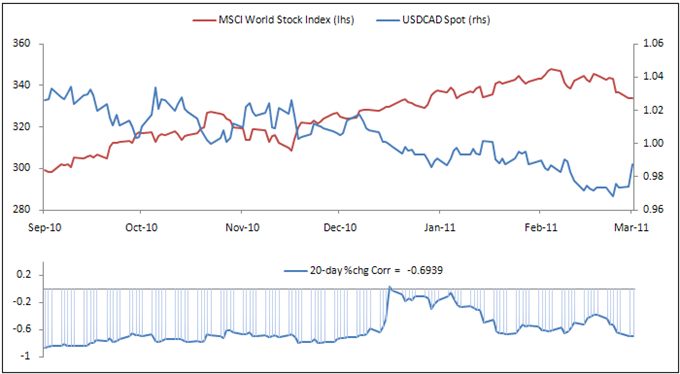 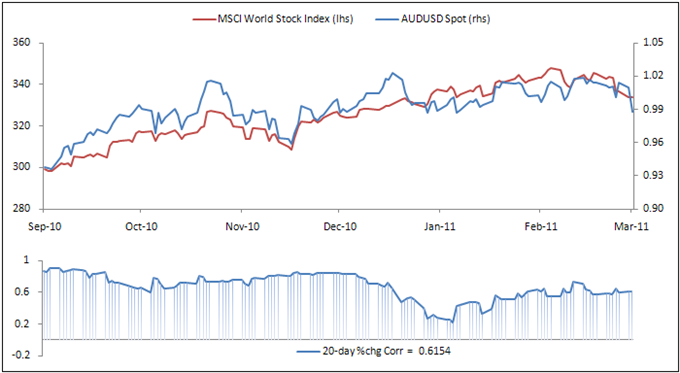 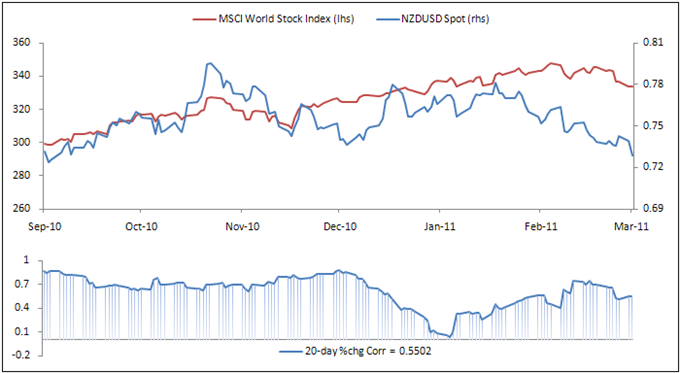