The EU-US yield spread remains in focus for the Euro. A firm set of preliminary PMI readings and an unexpectedly strong German IFO result failed to translate into meaningful upward yield pressure however, with any boost to rate hike expectations easily swallowed amid risk aversion as spreading turmoil in the Middle East – particularly the oil-rich Iran and Libya – sent capital fleeing toward Treasuries and weighed on returns as prices rose. For the remainder of the week, the outcomes of the European Central Bank’s 3-month LTRO (Wednesday) and German Consumer Price Index report (Friday) round out scheduled event risk. The former – a lending facility for banks – will be significant in that 38.2 billion euros are due to rollover from expiring debt; if the size of this week’s LTRO offering exceeds this, it will amount to an expansion of the money supply and may put downward pressure on yields and the Euro alike. The latter will be sized up against the recent hawkish commentary from ECB officials for clues on when a rate hike can be expected. Needless to say, the geopolitical landscape will also warrant attention given its implication for Treasuries and safe-haven flows into the greenback. 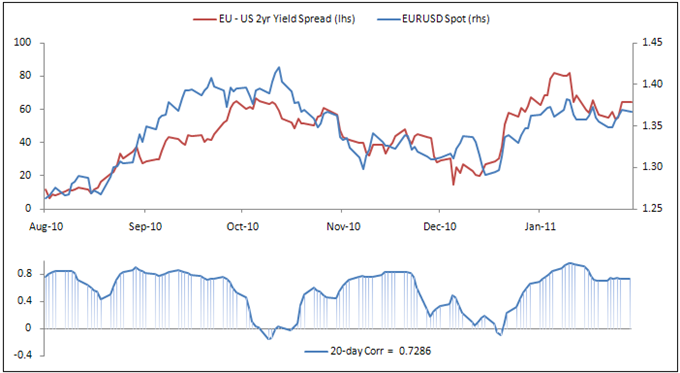 GBPUSD: All Eyes on BOE MeetingMinutes Amid Rate Hike Hopes

As with the Euro, the 2-year Treasury yield spread remains in focus for the British Pound, putting the spotlight squarely on the Bank of England as policymakers release minutes from February’s meeting of the rate-setting MPC. On balance, the report seems unlikely to offer much that was not already priced in after last week’s release of the updated quarterly inflation report, with risks skewed to the downside for the UK currency in the event that Martin Weale backtracked on his decision to call for a rate hike in December in light of the unexpected GDP drop in the fourth quarter. Also of note, the inflation report noted that its outlook was based on the assumption that the “Bank Rate [will move] in line with market interest rates,” which according to the report amounted to 50bps in rate hikes this year. A Credit Suisse gauge of investors’ priced-in expectations appears far more optimistic, opening the door for some disappointed selling if the minutes prove to be little more than a restatement of last week’s publication (as we suspect). A by-component breakdown of the fourth-quarter Gross Domestic Product reading to be released on Friday rounds out scheduled event risk. 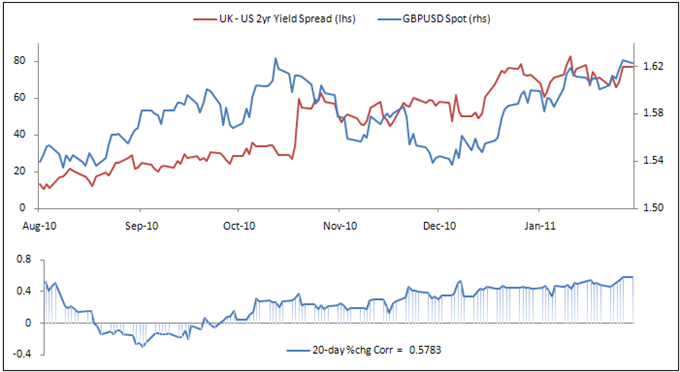 The Yen’s strongest noticeable relationship remains a firm link with spot gold prices. The currency and the yellow metal are also carving out increasingly noticeable correlations with the VIX index of S&P stock options volatility, investors’ go-to “fear” gauge. Broadening turmoil in the Middle East has sent the yellow metal soaring on safety demand, with prices up 2.4 percent last week. This suggests that the Japanese currency has some room to advance, pointing to USDJPY downside over the near term (a scenario borne out in technical positioning). January’s Trade Balance and Consumer Price Index figures headline the economic calendar. 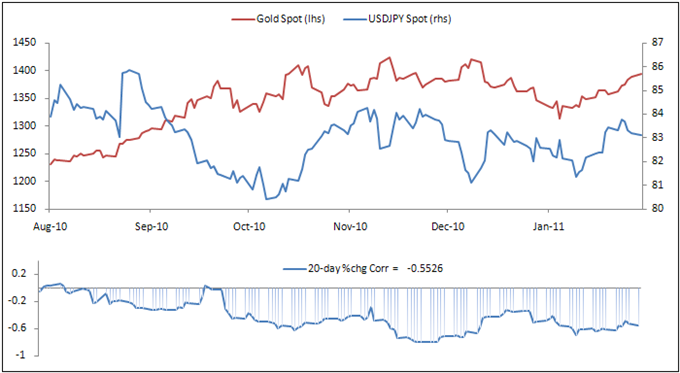 After several weeks of divergence, the commodity Dollars have coupled with underlying risk sentiment trends, as evident in reasserting correlations with benchmark stock indexes. This puts the spotlight on developments in the Middle East as well as the US economic calendar – long the proxy for the health of the global recovery at large – where expectations point to a week of sub-par results that may compound downward pressure on risk appetite from geopolitical factors. Indeed, US Consumer Confidence is set to decline for the first in five months in January while the Richmond Fed gauge of manufacturing activity stalls in February having snapped a three-month winning streak in the previous month. Meanwhile, Existing Home Sales are expected to print down 1.5 percent, telegraphing mounting signs of renewed turmoil in the housing market that promise to be compounded by a softer New Home Sales reading.On the positive end of the spectrum, Durable Goods orders are set to rise 3 percent, but the increase seems less exciting given the data series’ volatility. Another revision of fourth-quarter US GDP figures seems likewise unexciting given the ample set of timelier indicators on tap. Canadian Retail Sales figures amount to the only bit of noteworthy homegrown event risk. 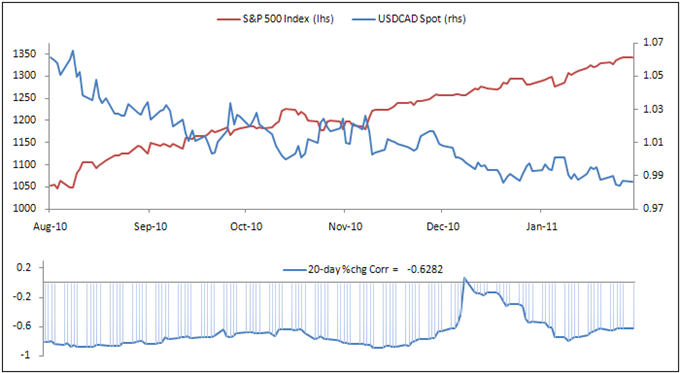 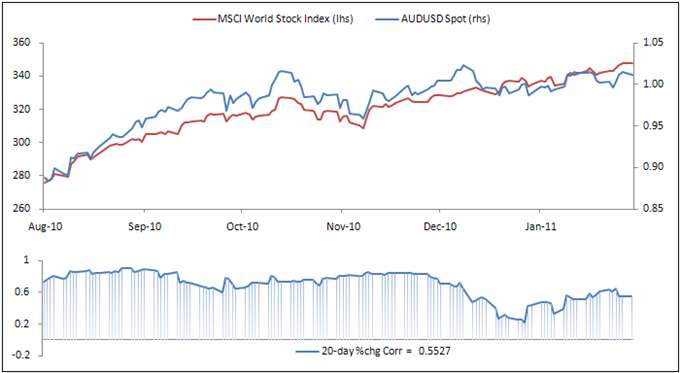 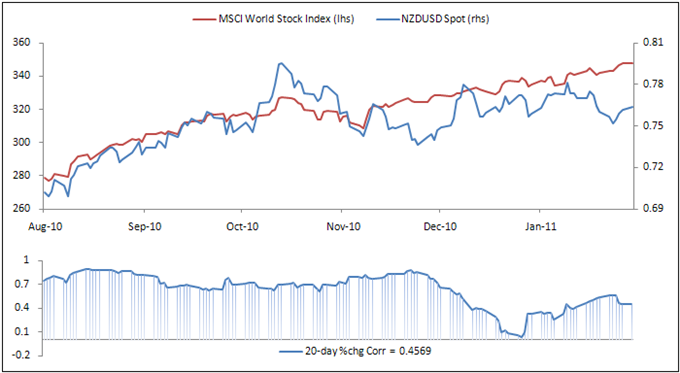