EURUSD: Euro Vulnerable as Yields Pull Back from 2-Year High

The Euro is looking to the outlook for monetary policy to guide price action, with EURUSD once again showing a significant correlation with the EU – US 2-year bond yield spread. In the absence of top-tier event risk on the economic calendar, this puts the spotlight on a string of speeches from European Central Bank officials – including ECB President Jean-Claude Trichet and his likely successor, Axel Weber – as markets continue to look for a clear bias amid the conflicting messages emerging from the central bank over recent weeks. The lack of clarity makes sense, and reflects a structural weakness in the ECB’s position: inflation has now printed above the 2 percent target rate, arguing for rate hikes; meanwhile, actually pressing ahead with tightening would substantially compound the burden on already debt-strapped periphery member states, making the refinancing of a large tranche of debt due to mature in March and April a very expensive (and potentially untenable) proposition. Emerging fissures across key member states concerning an expansion of the EFSF bailout fund are also not helpful, hinting EU yields may extend their pullback from the 2-year high set last week, opening the door for renewed Euro selling. December’s German Industrial Production and Trade Balance figures as well as the final revision of January’s German CPI headline the data docket. The ECB Monthly Report is also on tap. 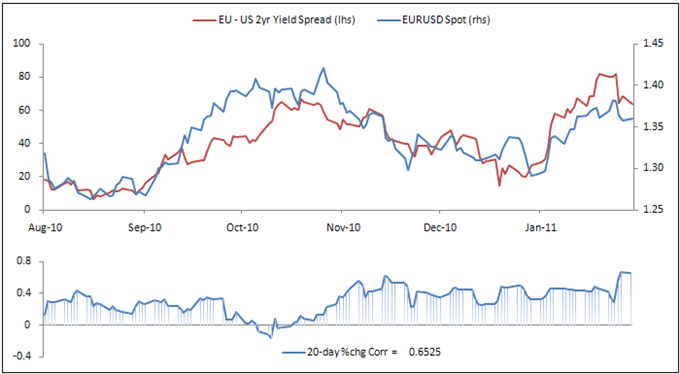 Monetary policy expectations remain in focus as GBPUSD continues to track closely with the UK - US Treasury yield spread. This puts the spotlight on the Bank of England as it delivers February’s much-anticipated interest rate decision. The announcement takes on special significance as it will be based on an updated Quarterly Inflation Forecast, with traders keen to glean some clarity on how policymakers will reconcile stubbornly high price growth with already sagging growth that is facesadded headwinds in the months ahead as the government’s austerity program filters into the broad economy.For their part, traders are positioned for a hawkish outcome with a Credit Suisse gauge of priced-in rate hike expectations for the coming year now at the highest in a year. This seems reasonable. While growth disappointed in the four quarter, the overall outcome for 2010 outdid the BOE’sown forecasts. Meanwhile, the annual inflation rate stands at an eight-month high, challenging the central bank’s credibility as a bulwark of price stability considering Mervyn King and company spent most of last year promising that CPI would retreat on its own only to see it continue to march upward. Minutes from January’s BOE sit-down reinforced the likelihood that policymakers would err on the side of price stability, opting to handle the threat of a back-slide into recession when and if it materializes. On balance, this opens the door for Sterling upside, although a rebuilding correlation with risk appetite (as tracked by the MSCI World Stock Index) may undermine gains if risk aversion returns in force. Industrial Production and Producer Price Index figures headline the data docket. 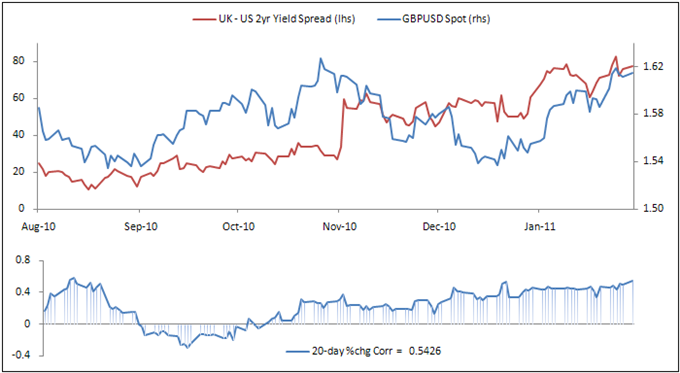 Perhaps unexpectedly, the Yen’s strongest relationship at present appears to be its inverse correlation with spot gold prices. In fact, this makes sense: a major driver in the gold rally over recent months has been rooted in inflation fears, with traders betting the metal will offer a good store of value if major central banks are unable to reverse record-loose monetary policies and let loose rapid price growth, debauching paper currencies. Not surprisingly, the very same logic has proved supportive for the Japanese Yen, where persistent deflation has likewise attracted store-of-value demand. Gold investment demand has soured over recent weeks however, with ETF holdings dropping to the lowest since June 2008, as the consensus view of the global recovery shifts toward favoring a long slog (coupled with muted inflation) rather than a rapid rebound, which likewise promises weakness for the Japanese unit. 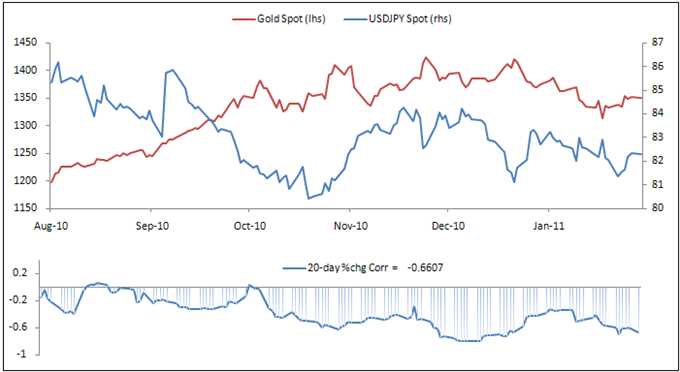 A firm inverse correlation between USDCAD and the S&P500 hints the Canadian Dollar may find itself on the defensive as markets have a chance to digest last Friday’s underwhelming US jobs report. The outcome produced a mildly positive reaction, with Wall Street tracking higher in its aftermath as investors opted to focus on the drop in the unemployment rate (down to 9 percent) rather than the disappointing increase in payrolls (36k versus 146k expected). Optimism may quickly dissipate however as it becomes apparent that the decline owed to an exodus of discouraged workers from the labor force rather than a pickup in hiring. Indeed, the labor force participation rate dropped to the lowest since March 1984. The Loonie is doubly vulnerable should investors have a change of heart as compared to other risk-linked currencies – all of which would likely suffer amid fading optimism in the recovery within the world’s top economy – considering its sensitivity to the US business cycle goes beyond its implications for risk trends and speaks directly to underlying fundamentals. Canada sends over 80 percent of its exports to its southern neighbor, making the health of the US labor market – and thereby that of the US consumer – a key ingredient in the country’s own performance. A lost list of scheduled speeches from Federal Reserve officials, including Chairman Ben Bernanke, will also be combed for clues on interpreting the state of the recovery in general and the jobs report in particular, with a dovish lean likely to encourage risk-averse positioning. China’s Trade Balance report may offer bit of a counter-balance however, with expectations calling for exports accelerate in January. Housing Starts figures stand out on the homegrown data docket. 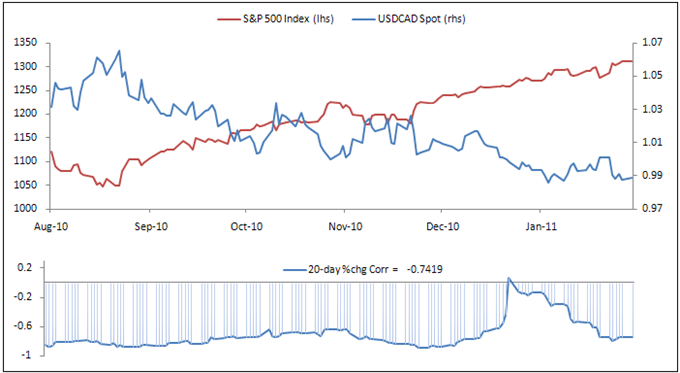 The outlook for monetary policy remains in focus for the Australian Dollar, with AUDUSD maintaining a significant correlation with a Credit Suisse gauge of traders’ priced-in rate hike expectations for the year ahead (as derived from overnight index swaps). Traders are having to contend with a clouded landscape after last week’s RBA rate decision was accompanied by decidedly dovish rhetoric, only to be followed by a seemingly opposing view in the central bank’s monthly report. From here, the markets will look for some clarity as RBA Governor Glenn Stevens testifies before a parliamentary panel while January’s Employment report offers some clues on which side of the policy spectrum is best supported by underlying fundamentals. Expectations call for the economy to add 17,500 jobs, a definite improvement from the previous month’s paltry 2,300 increase but certainly but still well below the average recorded through 2010. 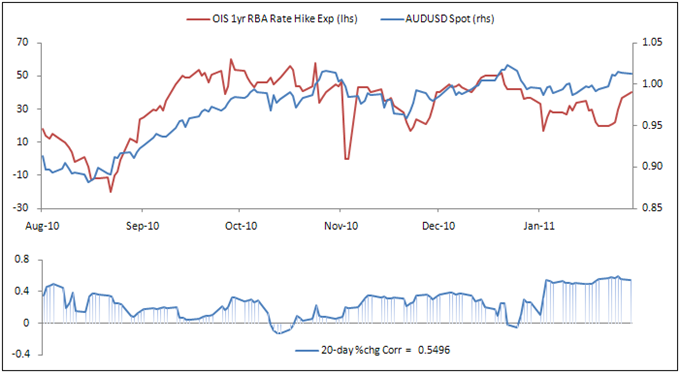 Risk sentiment has returned to the forefront as the driver of New Zealand Dollar prices, with NZDUSD quickly rebuilding its correlation to the MSCI World Stock Index after the latest RBNZ policy announcement poured cold water on imminent rate hike expectations two weeks ago. As with its Canadian namesake, this puts the spotlight on the markets’ evolving take on the US economy in the aftermath of last week’s jobs report, particularly as informed by the docket of speeches from Federal Reserve officials. On balance, this seems to favor Kiwi losses amid broad-based risk aversion, although a pickup in Chinese Exports growth may offer a temporary reprieve. 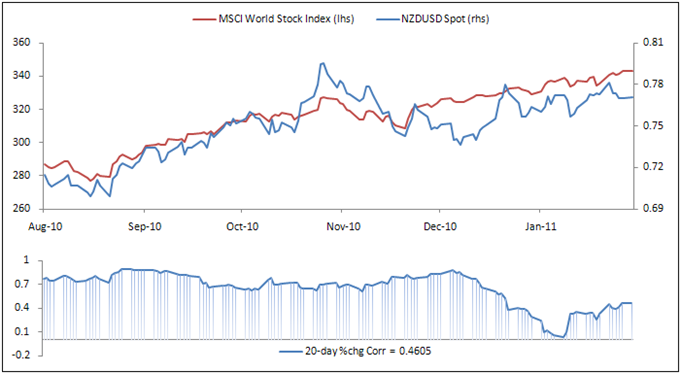