The Euro continues to show a strong inverse relationship with an average of credit-default swap (CDS) spreads from the Euro Zone’s most debt-stricken periphery member states (the so-called PIIGS, meaning Portugal, Ireland, Italy, Greece and Spain). This ought to make for an interesting week leading into Thursday’s European Central Bank interest rate decision with Portugal and Spain set to hold debt auctions just before the announcement. ECB President Jean-Claude Trichet went out of his way to brandish himself and his institution as tough on inflation last week and will be seemingly encouraged to do so again after CPI topped the bank’s target for a second month in January. However, last week’s jaw-boning pushed region-wide overnight borrowing costs to the highest since May 2009, which will likely to be reflected in tougher funding conditions for debt-sensitive countries and highlight the improbability of an actual rate hike until a firm solution to the sovereign stress on the Euro Zone’s periphery is ironed out. Geopolitical tensions will also enter the picture as markets continue to fret about the implications of violent unrest in Egypt for the global recovery, weighing on EURUSD as the Dollar finds a bid in safety demand. Investors’ fears seem well-founded considering the crisis threatens access to the Suez Canal – a key international trade conduit – while bidding up oil prices on the possibility of contagion in major crude-producing nations. 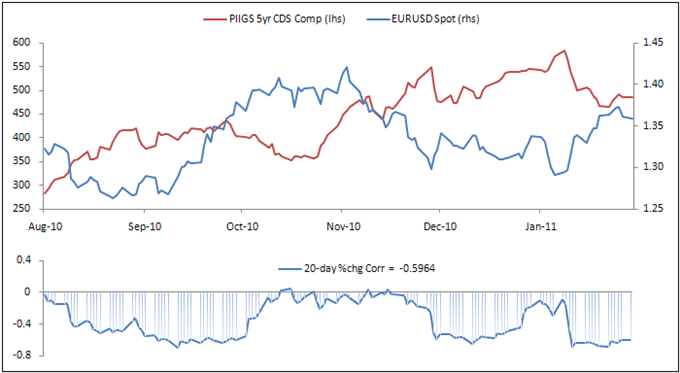 Monetary policy expectations remain in focus as GBPUSD continues to track closely with the UK - US Treasury yield spread. With no headline releases speaking specifically to UK monetary policy on the calendar, the focus will turn to leading indicators – most notably the Manufacturing PMI report – as traders search for direction amid conflicting cues from last week’s fourth-quarter GDP data and MPC minutes release. Needless to say, a busy US economic calendar culminating in Friday’s closely watched Nonfarm Payrolls reading will be important to monitor as well as signs of firming activity in the world’s top economy will put upward pressure on Treasury yields while weighing on GBPUSD. Finally, the crisis in Egypt continues to be a factor with the greenback poised to find support from safe-haven demand if the situation deteriorates further. 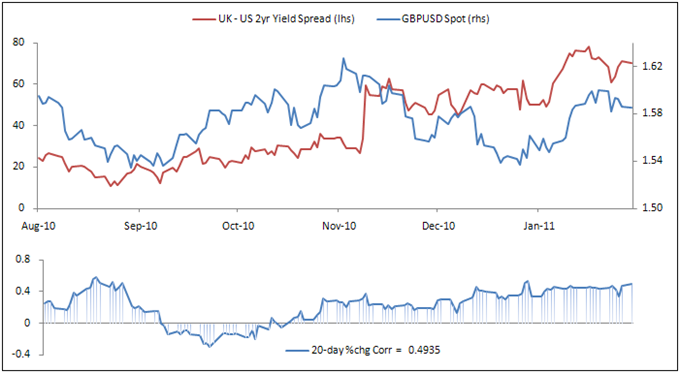 The Japanese Yen may find a new catalyst in the week ahead after USDJPY has remained confined to choppy ranges over recent months, with prices mirroring the relative standstill in the US-Japan yield spread. Smoldering turmoil in Egypt may rekindle volatility however as risk aversion gains momentum, pushing investors to unwind carry trades funded cheaply in the perennially low-yielding Japanese currency, pushing it higher. The pair’s correlation with relative 10-year yields remains significant however, hinting price action will remain responsive as a long list of US economic data releases including ISM manufacturing and service-sector surveys, Factory Orders data, and a host of second-tier metrics set the stage for the all-important US Employment report due on Friday. 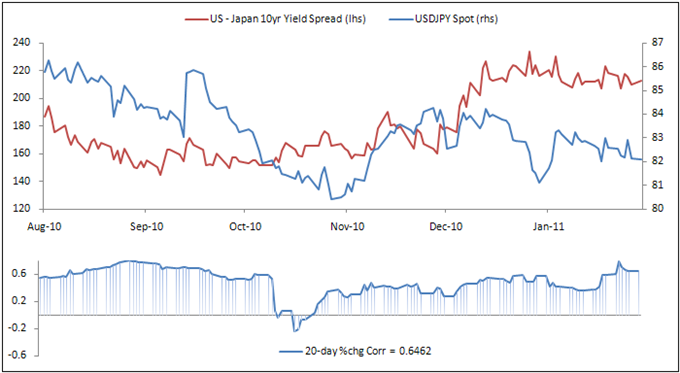 A firmly re-established inverse correlation between USDCAD and the S&P500 points to a conflicted outlook and plenty of volatility for the Canadian Dollar as risk sentiment finds itself torn between the firming US economic data – most notably Friday’s US jobs report – and continuing turmoil in Egypt. November’s Gross Domestic Product figures as well as January’s Employment and Ivey PMI readings headline the domestic economic calendar. 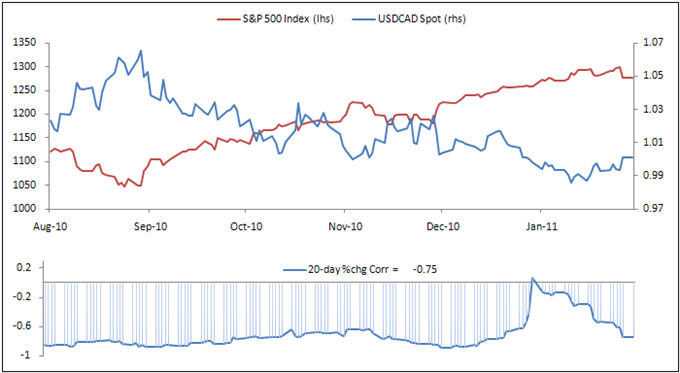 AUDUSD: All Eyes on the RBA with Interest Rate Outlook in Focus

The outlook for monetary policy has returned into focus for the Australian Dollar with AUDUSD carving out an increasingly significant correlation with the Credit Suisse gauge of traders priced-in rate hike expectations for the coming year (as derived from overnight index swaps). This puts the spotlight on Tuesday’s Reserve Bank of Australia, with the onus on the rhetoric of the statement accompanying the announcement considering the likelihood of a policy change appears negligible given the slide in inflation readings over the second half of last year and the hefty toll of the flood in Queensland. Continued turmoil in Egypt presents a wild card, with the selling pressure likely to gain momentum should escalating tensions continue to feed broad-based risk aversion. 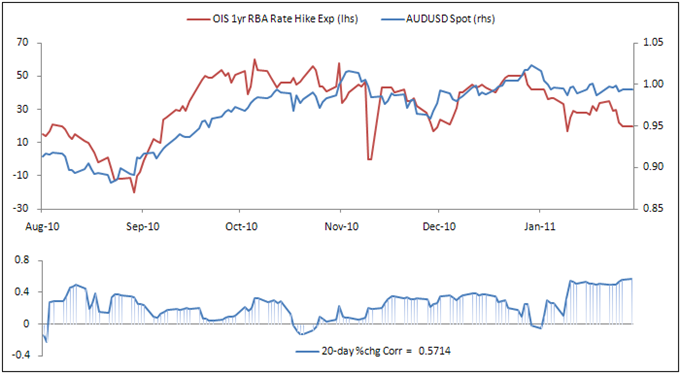 Interest rate expectations remain in focus for the New Zealand Dollar with NZDUSD still firmly correlated with the 10-year bond yield spread. This puts the spotlight on the US economic calendar – most importantly Friday’s Nonfarm Payrolls reading – considering the outlook for New Zealand was well-established for the time being with last week’s RBNZ policy announcement. The marked improvement in US economic data over recent months coupled with the greenback’s role as a safe-haven amid continuing turmoil in Egypt and an uptick in the New Zealand Unemployment Rate in the fourth quarter hints the path of least resistance points lower, in line with our technical outlook. 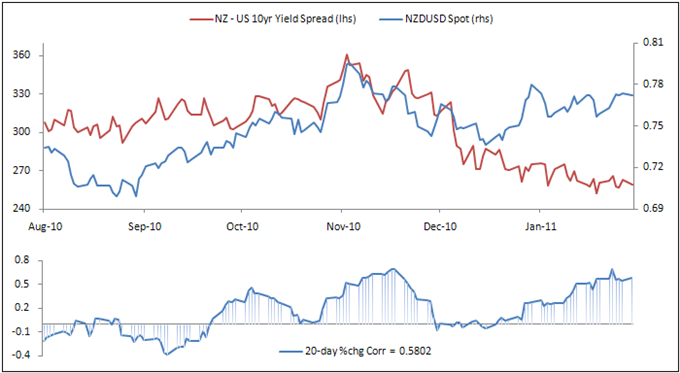