Gold, USD, USD/JPY Ahead of FOMC: Will the Fed Deliver Another Cut?

From Hawkish to Dovish in 2019

It’s been a peculiar year so far in global markets and that can even be spanned all the way back to the beginning of Q4 of 2018. At that point, the Fed had hiked rates a full eight times in the prior three years and appeared dead set on another rate hike in December. In the opening days of Q4, FOMC Chair Jerome Powell opined that he felt the neutral rate was ‘a long way’ off, widely-inferred to mean that the FOMC had plans for even more rate hikes in 2019. In fairly short-order the risk trade reversed and bearish themes populated the backdrop, and this ran all the way into December of last year at which point the Fed hiked again while forecasting another two hikes for 2019.

But what’s happened in 2019 so far runs in stark contrast to that stance at the FOMC last year. The Fed slowed down that hawkish verbiage and eventually the risk trade returned. The FOMC eventually began to forecast zero rate hikes in June of this year, started to open the door to rate cuts. Those cuts finally showed up in July and then again in September; but each time the bank framed the move as more of a tweak to policy rather than the start of a new trend, using phrases such as ‘mid cycle adjustment’ or ‘insurance rate cut,’ rather than opening the door to a more responsive stance later in the year.

Now the proverbial rubber is getting closer to the road: The FOMC meets for their October rate decision one week from now and the wide expectation from markets is for another 25 basis point cut. CME Fedwatch is currently showing odds of almost 95% for such a move at next week’s rate decision. 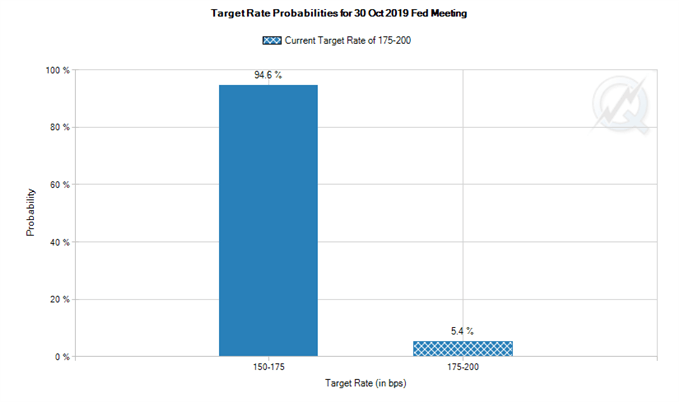 Complicating that backdrop is the fact that no updated projections will be provided at this rate decision. For that, we’ll have to wait until December and that brings up another question: Will the FOMC be prodded into yet another rate cut at that last meeting in 2019? Markets are currently showing odds of around 30% for such a scenario, which would bring the total to four for rate cuts this year, entirely erasing the bank’s tightening in 2018. 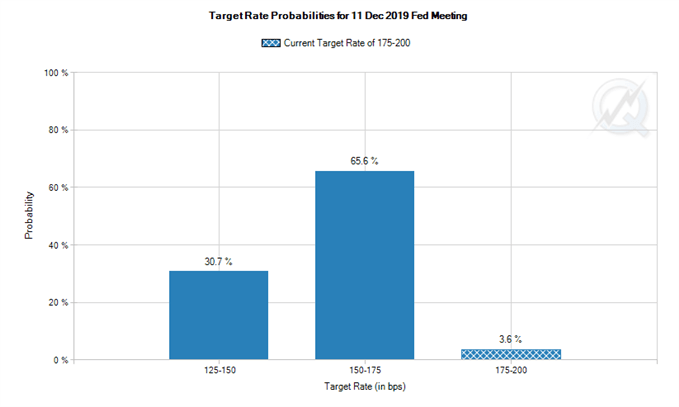 US Dollar Reversal in the Spotlight

For its part, the US Dollar held-up fairly well in the first nine months of this year, all factors considered. The bank was cutting rates but the USD remained relatively strong as there were bearish or dovish drivers elsewhere that appeared to take precedence. That theme began to shift coming into Q4 as the US Dollar started to show symptoms of reversal. I had looked into this as part of the Q4 technical forecast for the US Dollar, as the currency had built into a rising wedge pattern which will often be approached for bearish reversals. That setup has started to fill-in quickly and the natural question from this point is one of continuation potential.

Gold on Hold in Bull Flag – for Now

Probably one of the loudest technical themes from earlier this year remains on pause, and that’s the bullish theme that’s built in Gold as the Fed has moved into a more passive, dovish stance. Gold prices broke out last year during the Q4 sell-off, largely on the back of expectations for the FOMC to get less-hawkish as global market pressure mounted. And that’s continued so far through 2019, with Gold prices breaking out to fresh six year highs in early-August and strength holding into September trade.

Since then, however, buyers have remained at bay, even with the USD sell-off, as a bull flag formation has built around a 23.6% retracement of that recent major move.

One of the likely culprits behind Gold’s failure to push to up fresh highs is one of drivers: The major push point in this recent USD-breakdown has been strength showing in both the Euro and British Pound, and that’s largely been driven by positive events around Brexit rather than the chief push point of more-dovish expectations around the FOMC, which were pushing Gold prices higher earlier in the year.

If the Fed does take on a more-dovish stance in October, Gold could benefit; breaking out of the flag on a march up to fresh highs.

USD/JPY Builds Bullish Backdrop Even as USD Reverses in Q4

On the polar end of that spectrum, USD-strength may become a workable theme should the Fed continue to try striking a tone of stability, even with a 25 basis point cut next week. This is similar to what’s already happened around that July rate cut as the US Dollar drove up to fresh two-year-highs in the aftermath of that first rate cut in ten years.

As looked at in webinars over the past couple of weeks USD/JPY has started to become interesting on the long side of the US Dollar. Even as the USD has keeled-over in Q4, USD/JPY has remained relatively strong, pushing up to a fresh two-month-high just last week. Price action has continued to find buyers at higher-lows, indicating continued bullish potential with a big zone of interest currently in-play around the 108.47 level.