Gold Prices Bounce from 1400 - Might a Larger Pullback be Afoot?

Yesterday’s FOMC rate decision has left many market participants scratching their heads. While the bank did cut rates for the first time in a decade, they didn’t offer much clarity for what might be down-the-road and this was likely by design. To put it frankly, they probably don’t know, and wanted to avoid putting their foot too deep in the water of any one direction in the event that they’d need to adapt again in the near-future.

The one takeaway that can be agreed upon and this is confirmed by follow-through price action, but the bank was not as dovish as what markets were looking for. Going into the rate decision there were very realistic possibilities of as many as three cuts by the end of the year. But during the accompanying press conference, Chair Powell evaded the topic altogether and expectations for softer policy out of the US in the remainder of the year diminished.

This amounted to a support break in Gold as prices pushed below the 1415 level that had come back into play earlier in the week. But buyers showed-up around the 1400 level, which is the same support that helped to hold the mid-July lows. 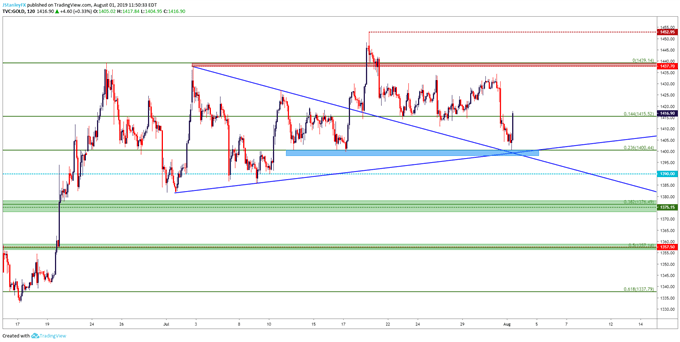 The big question at this point is whether that support bounce might be able to continue; and at the source of this are expectations around the FOMC. Given the lack of dovish clues from the FOMC yesterday, this theme may need to brew for a bit before the bank starts talking up future rate cuts again. The next big FOMC item is the rate decision in September and at this point expectations are roughly 50/50 for another rate cut at that meeting. But more importantly -that’s a quarterly meeting which means the FOMC will provide updated projections and guidance, and a continued show of concern could allow USD-weakness and strength in Gold prices.

This can keep the door open for a deeper pullback in Gold prices. That support bounce from 1400 has already run into a bit of short-term resistance from the 1415 area that had previously helped to hold the lows. This is a confluent area, as a trend-line projection produced from the past week of price action runs into the same approximate area. 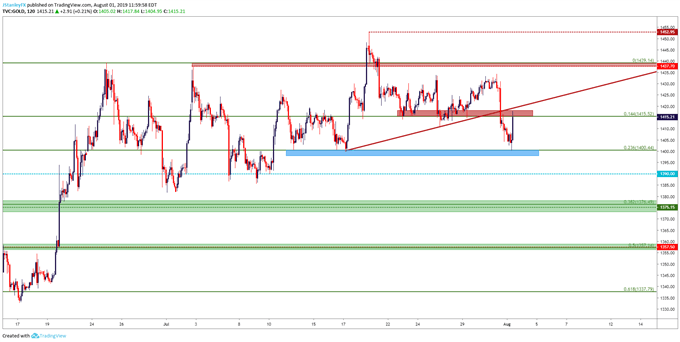 Given the recent backdrop of strength in Gold, coupled with that recent lack of dovishness at the FOMC rate decision, and there can be scope for a deeper pullback here. This wouldn’t necessarily spell out reversal of that longer-term trend, but it could help to further cool the overbought conditions that showed on a bigger-picture basis after the enthralling breakout from the month of June. 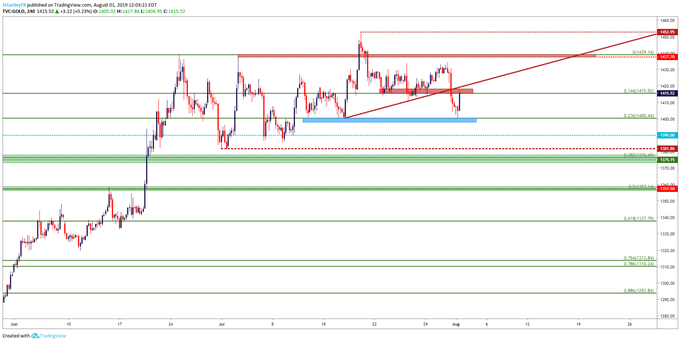 On a bigger picture basis, that bullish backdrop may still remain. As mentioned above, the bullish theme here got way overbought in the month of June as a minimum of pullback or slowdown showed. But this was very much being pushed by the prospects of a dovish FOMC, and outcome that has yet to show. So while it looks increasingly unlikely that the bank will hike rates anytime soon, they’ve also been shy about talking up future rate cuts; and its when that happens that the topside of Gold can become really attractive again.

For this theme, longer-term support potential around the 1375 or 1357.50 areas could make that scenario a lot more attractive. These were both significant swing highs in the recent past, with 1375 helping to set the 2016 swing high while 1357.50 was the 2017 high water-mark that eventually came back into cauterize the 2018 highs. To date – neither of these prices have been tested for support after the June breakout, and should prices pull back to either level, a show of support here can re-open the door for longer-term topside swing strategies. 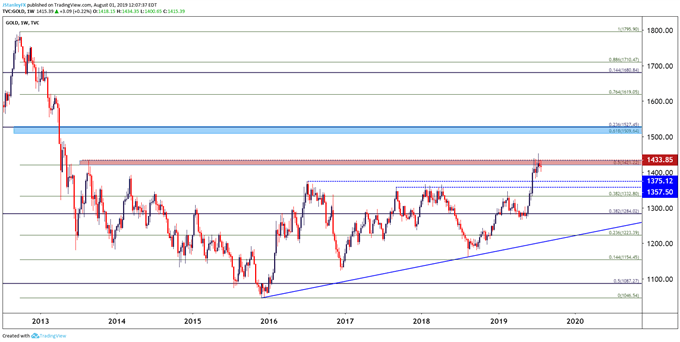