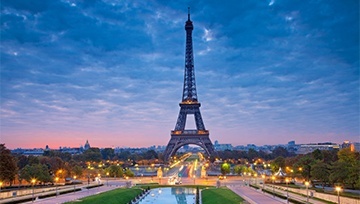 - It’s been a relatively calm start to the week for the Euro, as the currency is holding in patterns from last week without any major moves showing as of yet. EUR/JPY is caught at resistance around monthly highs, taken from the 126.80 level on the chart following last week’s outsized bullish move. EUR/USD is working in a near-term bear flag formation inside of the longer-term range.

- The economic calendar out of Europe is rather light for the next week-and-a-half, and this leaves technical themes as one of the primary drivers for near-term Euro price action.

Do you want to see how retail traders are currently trading EURUSD? Check out our IG Client Sentiment Indicator.

Early-April started with the hope that EUR/USD may sink below the support side of range formation that’s now almost half-a-year old; and then last week saw EUR/JPY spike with strength as the Yen sold-off aggressively in an apparent return of risk tolerance across major currencies.

But, at this point, neither of those themes have taken-over in the Euro, and the same digested-congestion that’s become commonplace remains. As looked at in FX Setups of the week earlier this month, the range in EUR/USD presented a fairly compelling backdrop for traders. Sure, the prospect of a bearish breakout could bring large moves; but that range was fairly well-built, and the way that buyers treated the bottom-portion of EURUSD support in the opening days of April gave the illusion that the range would remain.

That support bounce extended through the first half of the month and, at this point, prices in EUR/USD have built into a bullish channel over the past couple of weeks.

Taking a step back, and that bullish channel in EURUSD coming so closely after a bearish move presents a bear flag formation. This will often be approached in a bearish manner, looking for the corrective move off of support to, eventually, give way to the predominant trend.

The item of importance here is the fact that the predominant trend that led into support and then, the build of the channel, was really just a trip for resistance to support in the continuation of the range. This could cap target potential at that ‘big’ area of support.

So, where this formation could become usable is for Euro bears that are, in fact, expecting a break of range support. As discussed in yesterday’s webinar, the level of importance for such a scenario appears to be around 1.1250, which is very near the 38.2% Fibonacci retracement of that prior down-side run. A break below that support zone opens the door for a re-test of range support, followed by the potential for a down-side breakout.

It’s still there, six months later. Despite a number drivers and motives for traders to break the Euro in either direction over the past half-year, price action the world’s most popular currency pair remains in one of its tightest ranges ever.

Range breakouts can be really exciting themes for traders because they bring the possibility of outsized gains. Ranges themselves, however, are generally unexciting, especially for newer traders; but more experienced folks often enjoy the consistency with which risk can be managed, even if excitement is lacking. After all, markets are not here to amuse us and if excitement is a prerequisite for taking on exposure, that trader will likely have a short career.

In EUR/USD, I had looked at the prospect of range continuation in this week’s FX Setups, and that backdrop can remain attractive, particularly if prices continue to respect the prior point of resistance/support around the 1.1250 level.

For those that do want to look at short-side strategies in the Euro, EUR/JPY may be presenting a compelling case. The pair put in a big topside run in Thursday and Friday of last week, with prices being propelled all the way up to monthly highs around the 126.80 level.

But, so far this week, that theme has went nowhere very fast, and we now have three days of resistance at this level on the chart. This can open the door for reversal strategies, looking at stops above the high and initial targets around the 126.00 level. Below that, prior resistance around 125.60, which is also around the 61.8% retracement of the late-March major move could be a secondary target of interest. And a bit-lower, around the same 125.00 level in EUR/JPY that was used to base into bullish approaches earlier this month, could be interesting for additional targets.