FX Factors to Watch: Central Banks Should Be Careful What They Wish For

Focusing on the Federal Reserve as the key determinant of where markets were heading was so two years ago. Now it seems that forces beyond their control (gasp at the thought) are dictating the market’s focus. The force is in a word, inflation.

The IEA Chief Economist, Fatih Birol said it best earlier this week on a Bloomberg Interview when he said that those who wanted inflation and higher prices should be careful what they wish for because they just might get it. It is referring to inflation as Birol was referring to the sharp drop in Venezuelan output, which has turned the economically strained company to a net-importer as a key concern for the market that could in turn only add to the supply shocks that are driving up crude oil prices.

Feel like you lack confidence in your trading? This guide is just for you (and its free)

As a key proponent of intermarket analysis, I often preach that no market can be seen as an island. What shocks happen in one market will often have spill-over effects and crude oil’s spillover effect to fixed income, a key proxy for inflation expectations is ground zero. 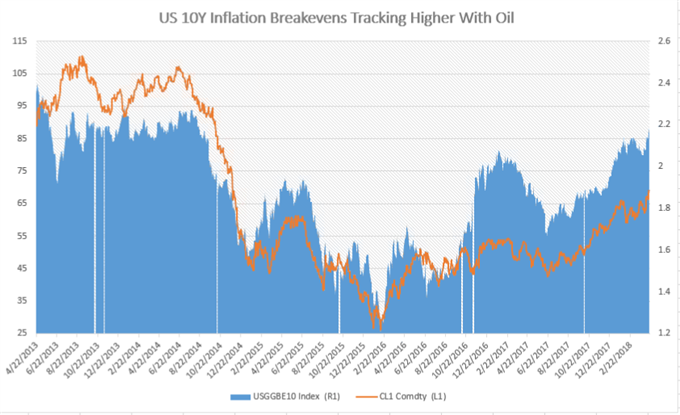 As you can see on the chart above, inflation expectations per the US 10Yr Breakevens are pushing higher alongside crude oil. However, crude oil is not the only inflation factor in town that’s on a tear. The massive Aluminum squeeze that has recently seen prices rise by the most since 2012 as a global downstream user of the non-ferrous metal contest with supply shocks due to US sanctions on Russian giant, United Co. Rusal, the biggest non-Chinese supplier.

The inflationary developments were met with NY Fed President, Bill Dudley who said that there was no real need for the Fed to be more aggressive given inflation remains below target. However, inflation has a habit of getting out of hand fast and a quick look at the front-end of the US yield curve shows us that once again, bond have it figured out, and it’s not good. The Fed is in a pickle of their own making with a little help from OPEC-Russia.

At a meeting in Jeddah between the Joint Technical Committee of OPEC and non-OPEC nations, reports came that the producers’ target of reducing global oil stocks back to the 5-year average was nearly accomplished. However, crude traders appear to be looking beyond as the backwardation in the energy market is showing a Brent curve with a bullish skew that is the highest in four years.

Our Crude Oil Forecast has been tracking these moves nicely, find out more here

Given the broad-based gains of the commodity sector and that futures traders continue to pay a premium as the benefit to buying and carrying now are expected to exceed the costs through December 2019 this warrants our attention. Commodity markets are by nature, fractious meaning that multiple forces like sanctions, supply cuts, tariffs and more can cause these markets and inflation expectations to push higher, which could weaken low-yielding haven currencies like the Japanese Yen further.

Haven Currencies Sell Off as the Franc Drops past 1.2000 per EUR

The trading day that will live in infamy was January 15, 2015 when the SNB put their collective hands up to tell the market, we’re done. In a moment, EUR/CHF dropped by ~19% from 1.2000 to ~0.98. Mind you this happened the same week that they said the peg of 1.2000 CHF to EUR was a cornerstone of their monetary policy.

Regardless of the blunder, the CHF by market forces and a few nudged by the SNB is back above 1.2000 per EUR to trade at the weakest level since the cap was removed on that fateful day.

Naturally, as you’ll notice in the factors to watch articles, these headlines tend to be inter-related. Due to commodities rising alongside inflation expectations, the view of a 3% yield on the US 10-year Treasury yield is back on the table, though an inversion may still be at hand in a few month’s or years’ time.

Over the last 48-hours, the relentless flattening of the US 2/10 yield curve has taken a breather after touching the flattest level (yields and prices closest) since 2007 on Wednesday. As I covered on FX Closing Bell webinar, the true concern of the market is likely not so much the 2-year yield, which is marching ever-higher, but rather the Federal Reserve’s terminal rate on their DOT plot. 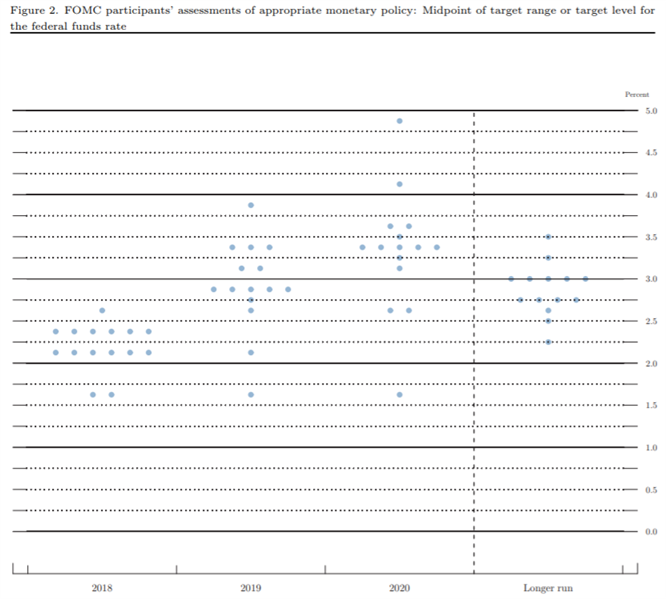 Either, the Fed is expecting to invert the yield curve intentionally, or they will need to bring down their median dot plot, which would likely wreak havoc on the US Dollar and cause the US Dollar bears to awaken from their hibernation that started on January 25.

Either way, the market appears to be calling the Fed’s hand, and hoping they don’t have a bluff as inflation emerges aggressively for the first time in a post-QE world.