GBP has been hot. Earlier today, GBP/USD traded as high as +1% from yesterday’s close. Over the last five days, GBP/JPY has moved higher by 3.15%. Tuesday brought about an inflation reading in the UK that likely confirmed what the Bank of England has been fearing. Consumer Price Index Data pushed higher market expectations that the Bank of England will have its hand forced by the market to hike rates.

The Bank of England meets this week and will announce a rate decision on Thursday. What seems most likely is a hold on rates with a warning from Mark Carney that the Bank of England may be forced to raise rates as 3-month average wages have been falling. The problem is that wages are falling while inflation readings like CPI and the Retail Price Index (RPIX) have pushed to multi-year highs on a y/y basis thanks to a very weak GBP. The price of GBP/USD has fallen ~11% since Britain voted to leave the European Union in June 2016.

Keep an eye on our economic calendar for Economic Data Points

Within fixed income, which can leave clues to how broader views of the US Dollar are shaping, there appears to be the reason for optimism if you’re a DXY Bull. The 3Yr-1Mo forward rates (i.e., the fixed income proxy for the Fed’s terminal rate,) appears to have found support, which could limit how aggressively the USD falls from here.

However, traders looking to buy USD should curb their enthusiasm. There remain many unanswered questions about the future of monetary policy in the US. Questions like, who will be the Federal Reserve Chair? How likely is the new Fed chair to validate or oppose the falling neutral rate theme that has kept the Fed on hold more than expected since 2015? Traders looking to trade a potential turn in USD should focus on weaker currencies like the JPY.

Crude Oil Bulls received good news before the highly anticipated EIA inventory report. OPEC is now expected to roll the production curbs into the second half of 2018. Less encouraging was the price reaction. In fact, since the first production cuts were confirmed in November of 2016, Crude Oil has remained in the top-half of $40/bbl for WTI. It appears that until the price of WTI breaks above $50 on a weekly close basis, it’s difficult to believe we’re through with the 2017 downtrend.

Lastly, never one to mince words, JPMorgan CEO, Jamie Dimon hit the wires on Tuesday with comments that were not Bitcoin-friendly. Dimon said that he ‘would fire any trader trading Bitcoin for being stupid,’ and that the move into Bitcoin ‘won’t end well.’ For those with a conversational familiarity with financial market history, Dimon added that Bitcoin is ‘worse than tulip bulbs.’ Only time will tell, but it looks like it will be a while until JPMorgan would touch the top crypto-currency in terms of market cap. Another Bitcoin headline that hit the wires today was that Nasdaq survey sees 'Long Bitcoin' as the world's most crowded trade, which edges out 'Long Nasdaq,' and 'Short US Dollar.' 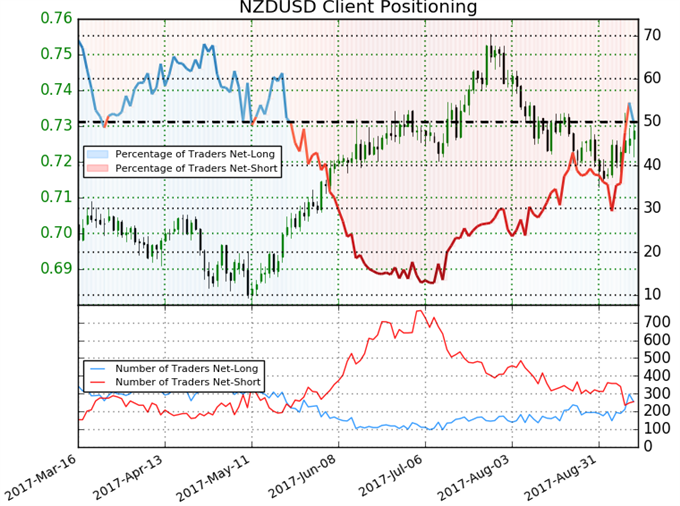 We typically take a contrarian view to crowd sentiment, and the fact traders are net-long suggests NZDUSD prices may continue to fall. Positioning is less net-long than yesterday but more net-long from last week. The combination of current sentiment and recent changes gives us a further mixed NZDUSD trading bias (emphasis added.)