The dollar continued the turnaround higher from Wednesday today on a move that now likely targets the DXY’s first weekly gain after three consecutive weekly declines. The USD was sold aggressively before the Fed’s rate announcement on the back of an inflation print and retail sales announcement that brought further doubt that we’d hear a hawkish message from the Fed. However, a hawkish (relative to market expectations) message is exactly what we got with front-end fixed income sellers emerging and dollar sellers covering their short positions. While expected volatility remains low for G10, we did go into the week with stretched short positions on GBP & USD that could see a few days and possibly weeks of retracements toward downtrend resistance.

In a different world where inflation is above levels of comfort when comparing to wage growth, the Bank of England came out with a rate hold that included three dissenters that were looking for a rate hike. On Wednesday, UK Core CPI came out at 2.6, which has the Bank of England’s attention who will look to prevent choking the economy that is suffering a bit under a cloud of Brexit uncertainty after the recent election that leaves PM May without her desired majority before formal negotiations begin. After the threedissenters (the most in six years) at the Bank of England had responded to the ringing alarm bells of inflation, the options markets began to buy protection against surprise moves higher in GBP. In a similar move, the 5yr Gilt yield rose by 12bp or ~34% from yesterday’s levels showing that the market is heading the rising dissents within the BoE that rate hikes could come sooner than expected.

The market was caught a bit off guard from the hawkishness of the Fed and Bank of England. One evidence of the surprise is the rise in sovereign yield curves aligned with the drop in equities and commodities that could be facing lower growth and higher supply. The market will look to the Bank of Japan. Ahead of the Bank of Japan monetary policy announcement, the JPY has sold off, and the options market is beginning to price in further declines vs. the USD at the highest level in a month. Given the recent central bank action, and action yet to be seen, USD/JPY & GBP/JPY should remain on your radar to look for further clawbacks of recent moves. 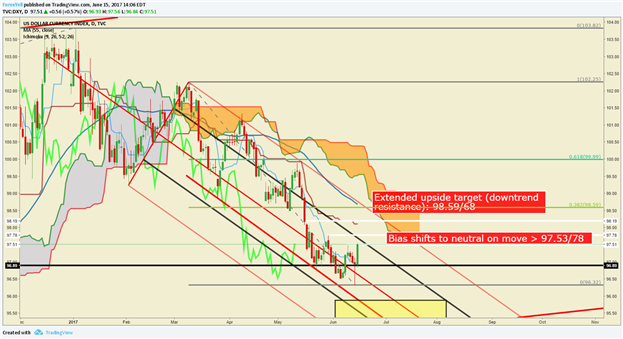 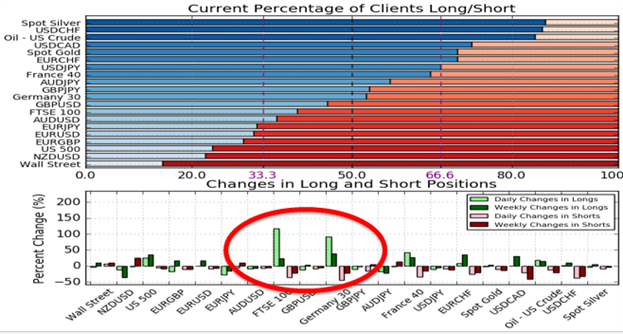 We typically take a contrarian view to crowd sentiment, and the fact traders are net-long suggests Germany 30 prices may continue to fall. Traders are further net-long than yesterday and last week, and the combination of current sentiment and recent changes gives us a stronger Germany 30-bearish contrarian trading bias. (Emphasis mine)