It is not an easy time to be a forecaster for Sterling. After the election fumble by Theresa May and the Tories, there is hope that the Brexit negotiations could take a softer tone that could, in turn, provide a supportive economic agreement going forward that helps the UK economy and reduces the current account deficit, which has been a decade-long slide. On Wednesday, there was another round of favorable economic data in the UK that the Bank of England will likely discuss when they meet later this week in the form of CPI that was well above consensus. While initial arguments may fear that the weak GBP means the UK is merely importing inflation, it is worth noting that front-end Gilt yields rose dramatically in the belief that the Bank of England will need to act in some manner regardless Brexit negotiations if inflation continues on this path.

For sterling traders, it is difficult to have a medium-term favorable view of sterling appreciation below 1.2785/2800 which is composed of the 55-DMA and resistance of Ichimoku Cloud. Given the recent declines, bounces should be viewed with the skepticism of continuing and a break below 1.2521 (100-DMA / March 27 high) would encourage further weakness, which the BoE could accelerate if they “overlook” the recent inflation overshoot.

A point we touched on yesterday was the potential stealth regime change from the Bank of Canada. Yesterday’s CAD strength was at the hands of Sr. Deputy Governor for the BoC, Carolyn Wilkens. On Tuesday, BoC Governor, Stephen Poloz validated the new hawkish focus though he said despite recent economic growth, there is not enough data to be “throwing a party yet.” Regardless of that comment, it appeared enough of a tell that the BoC would be more easily encouraged to hike than to cut, which helped the Canadian Dollar add to Monday’s gains, and is currently trading at the highest levels against USD since February.

As we head into FOMC on Wednesday, two words are likely stuck in traders’ minds. The two words uttered by alwaysvoting NY Fed President Bill Dudley, who noted that the Federal Reserve would likely take a “little pause”when they began the process of reducing their balance sheet closer to the $880B that they had before the GFC and away from the ~$4.5T currently held are important. Wednesday’s statement and following press conference with Chairwoman Yellen will hopefully provide clarity on what a “little pause” would look like if she shares Bill Dudley’s view. 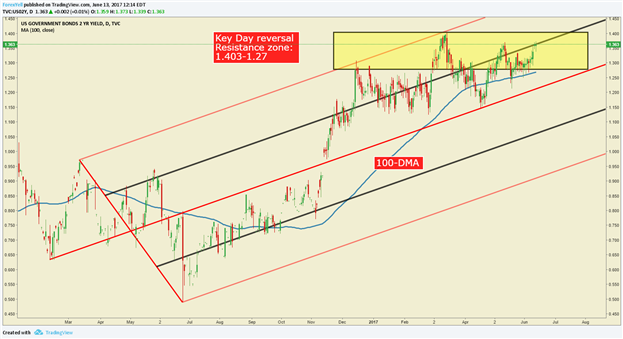 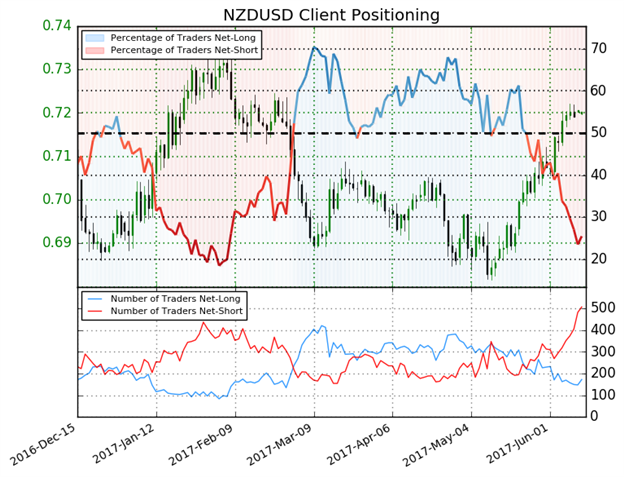 We typically take a contrarian view to crowd sentiment, and the fact traders are net-short suggests NZDUSD prices may continue to rise. Traders are further net-short than yesterday and last week, and the combination of current sentiment and recent changes gives us a stronger NZDUSD-bullish contrarian trading bias.(Emphasis mine)