EUR/USD fell to monthly lows on a drop in inflation forecasts due to a global phenomenon, weak energy prices. However, the weakness in the EUR appears short-lived, and a look at the chart of EUR/USD still shows a positive price structure above 1.11. Draghi encouraged patience as the world awaits whether or not the ECB will hit their 2% mandated inflation target. However, the ECB did lift their economic growth forecasts, albeit by a mild 10pbs. This small lift in growth forecasts did enough to quiet fears of further rate cuts down the road. The combination of lower inflation, but higher growth could provide a backdrop for risk to remain supported and volatility to remain low depending on the outcome of the UK election.

The Jim Comey testimony passed with little fanfare or implications that should add to the risk-premium in the US. Thursday’s Senate testimony did help markets take a sigh of relief as Comey said he declined to say as it was not his place to say whether or not he felt that the President attempted to obstruct justice. On the other hand, this means the issue will likely not be put to rest soon, which puts the focus on the UK election.

As with most elections, it is doubtful that a firm conclusion will be reached before the close of NY trading at 17:00 EST. We continue to see a fall in 3-month implied volatility, which would most likely only change course should there be a surprise Corbyn victory for the Labour party. It is worth noting that the short-term effect on the announcement of the election is likely to be the market’s perceived view of the GBP for the long-term. A short-term bounce in cable is most likely on a Tory victory given that’s what the market has priced in, but long-term, markets still fear the tough stance that honor’s the Tory view (God, King, Country) could have on effective Brexit negotiations. On the other hand, a Corbyn-led Labour victory (seen as unlikely by the polls) is likely to provide a more unified EU-UK negotiation going forward. There remains fears about Brexit’s impact on the economy going forward and Labour is perceived to help mend the ways that the EU referendum outcome to leave have confounded investors with exposure to London.

A clear market point that investors have been watching are the spreads between US Treasury yields and UK Gilt yields at the 10-year benchmark. Recently the spread (an indication of credit quality) between the two sovereigns have risen to a near record high as US yield premium over the UK is near the most extreme level that was recorded in June 2000. The technical point of concern on the chart that would likely cause aggressive selling would be a break below the May low of 1.2764 in GBP/USD.

What will come of the Dollar as the Fed faces lower inflation around the world? Find out here! 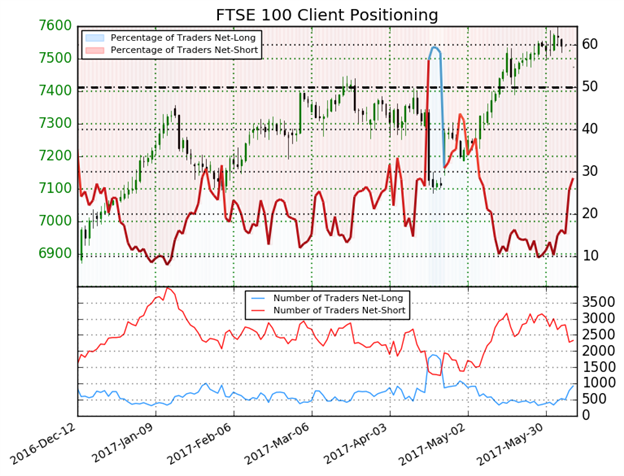