While a steady narrative that holds month over month is difficult to come by, there is one thing that traders seem to agree.Janet Yellen & Co. at the Federal Reserve will have a hard time threading the narrow needle of reaching a terminal rate of 3% (per the Fed’s Median Dot Plot) while attempting to reduce their $4.5 trillion balance sheet.

On Friday, markets were understandable further shaken of their fading USD-confidence as wage inflation pressures dissipated and the headline NFP number missed. However, the weakening dollar and still relatively low volatility environment are helping keep option pricing down and allowing leverage to be plowed into higher yielding markets like equities and emerging markets.

This environment is leading to an odd reality where many, though not all, traders are doing well as long as they’re not long USD outright via spot. As we come to the end of H1 2017, we see markets on both sides of the spectrum, whether havens like Gold and JPY, or risk-assets like EMFX and equities performing well. Per the CFTC positioning data, trader’s believe this trend could continue if volatility remains low and the dollar remains “cheap” relative to what investors were anticipating at the start of the year.

Much of this week’s price action will be in anticipation and reaction to Thursday’s events, which include an ECB meeting where Mario Draghi & Co. could present updated and more confident economic projections while keeping rates at their current level. Recent CFTC data shows us that net-Bullish wagers from hedge funds have hit their highest net position since 2011. Thursday will also bring the political tier-1 events of the UK elections, which has seen the Conservative lead narrow to the Labour party and the testimony of ex-FBI director James Comey who will speak on his view of the events that lead to his dismissal from the top post. The dollar has weakened materially since the announcement of his departure on fears that some political capital could have been exhausted on showing him the door that could limit the possible passage of President Trump’s fiscal reform.

In addition to the prime-time financial and political events on Thursday, traders will rightfully keep and eye on commodity and emerging markets, which have been diverging of late. We’ve seen material weakness in Crude Oil as fears remain that the shale production will continue to spoil OPEC’s plans for balancing the market. However, we’re not seeing the commodity weakness spread to emerging markets like we have seen in commodity cycle’s past. Now, it seems that EMFX is a proxy for dollar demand and borrowing costs and a cheaper USD allows EMs to provide a higher risk-adjusted yield that is sought after when the political smoke clears to show there is no fire.

On Monday, this played out in Mexico where the Carry Trade was shown to be alive, and well after a gubernatorial victory of the party of President, Enrique Peña Nieto helped to calm concerns of a political changing of guards that would have rightfully worried Mexican sovereign bondholders. On Monday, the Mexican Peso traded at levels not seen since November 9 and look set to trade below (indicating MXN strength) the election-day low of 18.156

The bond market doubts that the Fed can accomplish what they say they can. What do our analysts think will be the outcome? Find out here!

Closing Bell’s Top Chart: June 05, 2017, Higher 10Y notes can communicate doubt in what the Fed can do 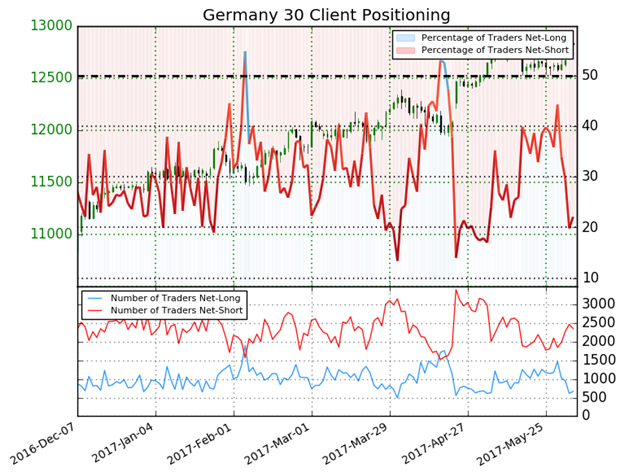 We typically take a contrarian view to crowd sentiment, and the fact traders are net-short suggests Germany 30 prices may continue to rise. Traders are further net-short than yesterday and last week, and the combination of current sentiment and recent changes gives us a stronger Germany 30-bullish contrarian trading bias. (Emphasis mine)