The USD, via the Dollar Index or DXY, traded to the lowest levels since November on Wednesday amid political turmoil that currently does not have a clear end in sight. It was not just the USD that sold off, but stocks also had their worst day since September. On the flip side of the USD & equities sell-off, Gold had its biggest gain since the Brexit outcome, and JPY similarly had its best day since late July. In other words, Wednesday was the risk-off day of 2017 thus far. The turmoil is understandably being blamed on the current US Presidential administration, but US economic data has not been smelling of roses as of late either.

Per the Citi Economic Surprise Index, the recent drop (meaning consecutive large disappointment compared to economist’s expectations) is the largest in the US since 2015 and 2014, both times, which caused the Federal Reserve to put the breaks on their tightening agenda. As you can imagine, the markets are taking notice, though they are not fully convinced that the Federal Reserve will stop their plan to hike rates considering they stated that the weakness in data earlier this month was likely ‘transitory.’ However, a discount is being placed on the certainty of a Fed hike in June, which has directly weakened the USD as the implied change of a June Fed rate-hike has dropped to 60% from 80% a week ago per Bloomberg.

Naturally, a lot of traders are also keeping their eyes on Gold, which has retraced over half of the loss seen in in April and May over the five straight days. The rise has been tied to the weak USD, but support for Gold can also been seen in the options market with 25-delta risk reversals seeing a positive parallel shift (i.e., a rise across tenors), which shows demand is not just short-term for upside protection in Gold.

Traders would do well to remember that we’ve seen this type of environment before, specifically in 2015, when JPY strength and EUR strength aligned as haven currencies. As the title suggests, it appears that the risk premium that was placed on the EUR ahead of the French elections has been handed over to the USD. We’ve also seen that it takes a clearing of the perceived risk where the turmoil is no longer a perceived threat for the risk premium to be removed, which means it could take some time for the USD to no longer be sold first before traders ask questions later.

Would you like to see what our Analysts forecast for JPY longer-term?Find out here! 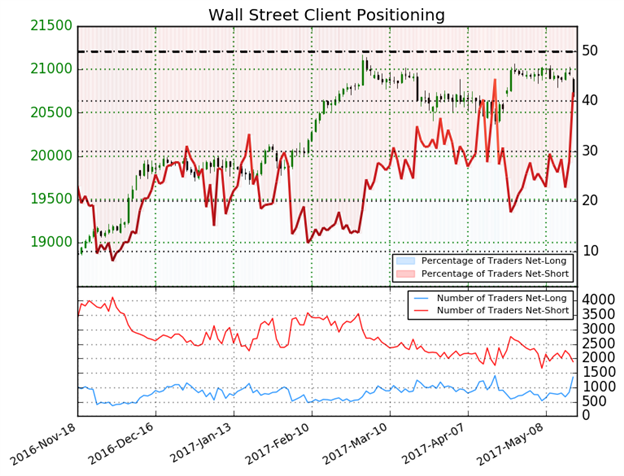 The aggressive rise in net-long positioning on a daily basis in Wall Street places doubt on a sustainable move higher in the short-term despite the hope of traders.