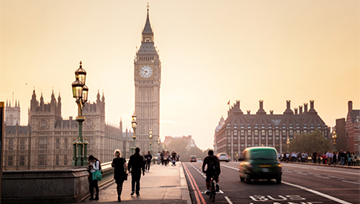 Want to know what we're watching in the markets? If so, you might like our free Trading Guides.

Two currencies that have been considered, “flavors of the month,” were both met by surprisingly dovish language from their respective central banks. While no one expected a change in rates from the Bank of England, investors were anticipating a favorable outlook with a few dissents calling for hawkish action. Taking ‘hawkish’ action is central banker talk for those hating inflation so much that they fight with higher rates, and the weaker GBP we have seen over the last year is ripe for concerns that would bring out the Hawks. However, the BoE said that they would await a smooth (i.e., successful) Brexit before consensus for a hike was likely, which caused GBP/USD to fall by the most in a month.

The chart of the day below shows GBP/USD pushed to the lowest level in a week with the largest bearish (close expected below open) intraday range in a month. However, it is worth noting that support may be close behind with the 21-DMA (1.2830) followed by the median line of the price channel drawn. Traders should note and protect themselves in case US retail sales and CPI surprise to the upside on Friday, which could take Cable lower toward the April 21 low near 1.2755. A disappointment in US data, which remains on an underwhelming trend of soft data prints could support Cable and provide the ingredients for an upside test of the possible triple-top at 1.3000 and 55-WMA.

The other central bank that took headlines on Thursday was the RBNZ, which are seen as responsible for NZD being the largest losing currency for the day. NZD/USD fell as much as 1.3% after the RBNZ kept a dovish stance after saying that the inflation pressures that the market has also seen and has been encouraged byare likely transitory. Of the major central banks, the Reserve Bank of New Zealand was seen as a top candidate to switch to a more hawkish tone. That perceived expected hawkishness was jolted when the RBNZ lowered their inflation forecast, which helped take NZD/USD to the lowest level in 11-months.

Would you like to see what our Analysts forecast for GBP longer-term? Find out here! 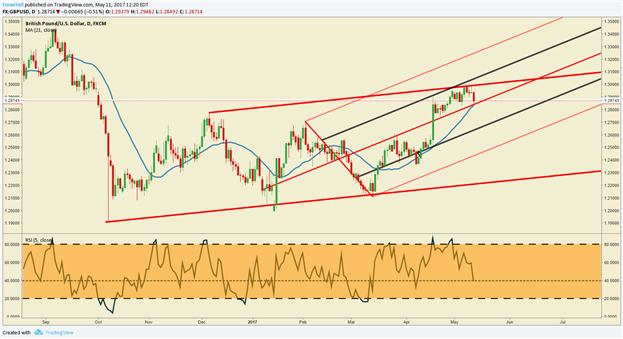 The sentiment highlight is designed to help you see how DailyFX utilizes the insights derived from IG Client Sentiment, and how client positioning can lead to trade ideas. If you have any questions on this indicator, you are welcome to reach out to the author of this article with questions at tyell@dailyfx.com.

We typically take a contrarian view to crowd sentiment, and the fact traders are net-short suggests FTSE 100 prices may continue to rise. Traders are further net-short than yesterday and last week, and the combination of current sentiment and recent changes gives us a stronger FTSE 100-bullish contrarian trading bias.(Emphasis Mine)

The aggressive rise in net-short-positioning on a week-on-week basis in the FTSE places doubt on a sustainable move lower. On Thursday, the Bank of England may have provided support for the uptrend, while 7,100 is the preferred focus level I anticipate holding while the bullish contrarian trading bias holds.