Want to know what our top minds think about the USD trend?

Thanks to the largest inventory draw of Oil in the US for 2017, commodities as a whole and their respective correlated currencies saw an unwind of short positions across the complex. Crude Oil (CFD: USOil) jumped above a prior chart pivot of $47.11, but now faces a key test to see whether or not the buyer momentum will continue. The zone in focus, which is shown on via a highlighted circle on the chart below is the at 38.2-61.8% Fibonacci zone of the ~19% fall that took place from April to May. The price zone is $47.50-50/bbl. A failure for the price to eventually trade and close (settle in future’s trading) above $50 in the near future would favor the like hood of a lower-high developing, which would argue for further downside to come.

Turning attention to the US Dollar, we have seen a rally off a 3-year Trendline in DXY that has raised hopes that we could see the rally that has failed to develop so far in 2017 despite hawkish Fed communique. However, when looking at the short-term or 90-day bond market like Eurodollar futures, we see an increase in new positions like Eurodollar calls, which would mean a lower USD LIBOR and likely lower USD. A move lower in the Eurodollars market that traders are closing out of trades that favor would profit if short-term rates (12-months or less) for USD exceeded what is currently priced into the market.

Lastly, we sit in the shadows of Super Thursday, which is the Bank of England’s full show on inflation, monetary policy projections, and interest rate announcements. On the charts, much focus has been placed on the sustainability of GBP/USD above 1.29 and EUR/GBP recently closing the first-round French election gap. Currently, implied volatility for GBP has dropped to the lowest levels since 2015, which help argue that any hawkish hint from the BoE on Thursday will not be met by aggressive sellers and could see the Sterling rally continue. 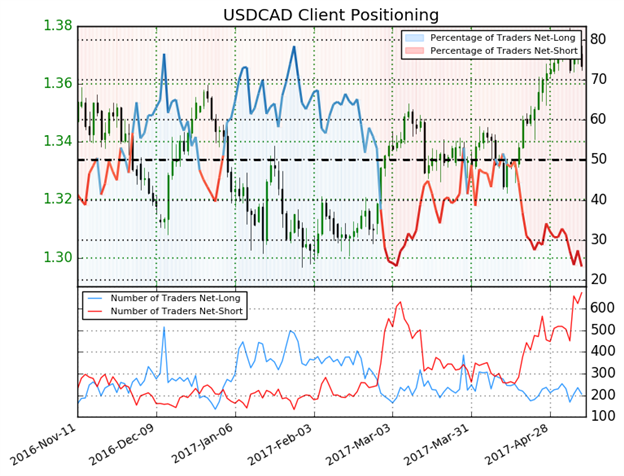 USDCAD: As of May 10, retail trader data shows 24.7% of traders are net-long with the ratio of traders short to long at 3.04 to 1. In fact, traders have remained net-short since Apr 18 when USDCAD traded near 1.33163; price has moved 2.7% higher since then. The number of traders net-long is 3.8% higher than yesterday and 18.7% lower from last week, while the number of traders net-short is 8.7% higher than yesterday and 20.2% higher from last week.

We typically take a contrarian view to crowd sentiment, and the fact traders are net-short suggests USDCAD prices may continue to rise. Traders are further net-short than yesterday and last week, and the combination of current sentiment and recent changes gives us a stronger USDCAD-bullish contrarian trading bias.(Emphasis Mine)

The aggressive rise in net-short-positioning on a week-on-week basis places doubt on the sustainability of the move lower. Support holding near 1.3575 should hold if the contrarian signal bias holds true, which would favor an eventual resumption higher.