Interested in improving your trading outlook? You may find our FREE trading guides helpful.

US dollar strength picked up on Tuesday where it left off on Monday. The strength for the greenback was clearly seen against the haven currencies, the CHF & JPY, as well as EUR and AUD. Haven currencies have failed to rally as the CBOE S&P Implied Volatility Index or VIX closed on Monday at its lowest level since 1993. The Australian dollar, on the other hand, failed to find strength after being aggressively sold as Iron Ore continues its free fall due to fear of increasingly weak demand in China.

USD/JPY appears to be the clear USD play as JPY took over the weakest position in the G8 strong/ weak index on Tuesday, replacing the Australian Dollar. On Tuesday, USD/JPY traded above the 100-DMA, and we could be working on a move toward the early March high of 115.50 if the current environment remains undisturbed. Currently, the strongest G8 currency in early May is the British Pound, which will soon have ‘Super Thursday’ to help determine whether cable has further upside. According to data from the Depository Trust & Clearing Corporation (DTCC) that was gathered by Bloomberg, there is a developing theme of Bullish USD/JPY options (calls) that are spread out over the coming year. The most Bullish of the $12 billion in options favoring further USD strength was looking for a touch of 133 in USD/JPY by next year.

Recommended reading: Build Your Trading Plan around the Strongest Currencies

Short-term momentum remains in favor of USD. However, to get a better picture on what’s developing in EUR/USD, we should look to the short-term chart (shown below). While there are fundamental developments that favor further EUR upside, the chart needs to agree. An agreement from the chart may look like a failure for EUR/USD to break below the 1.0850/1.0740. If the price stalls above or in this zone, and then breaks higher, we could be resuming a move higher, which would favor a move into new 2017 highs. A break and close below 1.0740 would open up the view that DXY strength may be finding fresh favor across the board, and not just against weak currencies like AUD, JPY, & CAD.

Would you like to see what our Analysts forecast for EUR longer-term?Find out here! 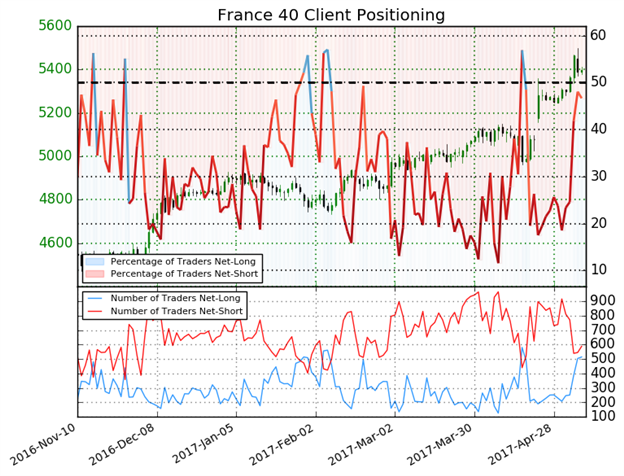 We typically take a contrarian view to crowd sentiment, and the fact traders are net-short suggests France 40 prices may continue to rise. Positioning is more net-short than yesterday but less net-short from last week. The combination of current sentiment and recent changes gives us a further mixed France 40 trading bias.(Emphasis Mine)

The aggressive rise in long-positioning will take on more importance if price can break below chart support. Admittedly, we’re a long way from said support, which currently lies at the April 19 low at 4,978.7 or ~9% from Tuesday’s close.