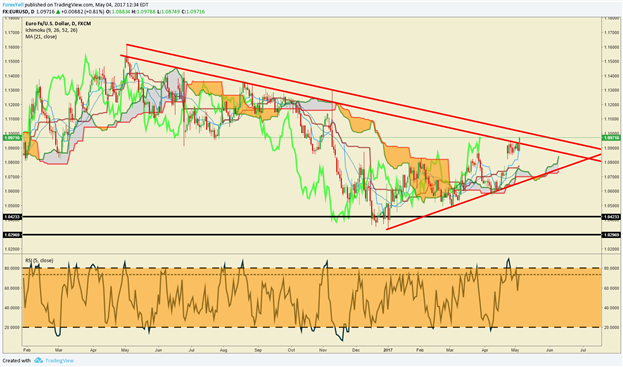 Not sure why Crude Oil continues to trade lower? You may enjoy our free oil forecast!

Thursday showed that the USD was not able to enjoy its relatively hawkish and in-line FOMC for long. After strengthening on Wednesday afternoon, especially against the weaker AUD & JPY, the USD continued weakening extending its 2017 trend lower and dangerously close to new 2017 lows. European data has been encouraging to say the least as the Citi Economic Surprise Index for the Eurozone is pushing closer toward the highest levels of 2017 after Italian PMI’s surprised positively. We may slowly be approaching the point where the burden of proof within the ECB will soon be on the doves, which will be a change of scenery for many traders.

If you hear of some good news in the commodity sector, would you share it with me? It’s been a while since I’ve heard anything positive from Energy and Metals. Metals extended their sell-off with Silver marking its 13th down and Chinese Iron Ore futures ending the session limit-down on fear that demand from China will continue to disappoint relative to the abundant stock of supply. The 10-day rolling correlation coefficient of Dalian Iron Ore and the Australian Dollar is +0.625, which helps to explain why AUD is offered after a relatively positive RBA announcement earlier this week where rates were held steady.

Of course, oversupply is also the core concern the dragged Crude & Brent oil lower on Thursday. Brent traded below $50/bbl for the first time since November after the original OPEC deal was confirmed and Crude broke below $47.11, a key level of support that failed to hold and could mean we’re moving toward $43/40 if the trend continues.

Would you like to see what our Analysts Forecast for JPY longer-term? Find out here!

All week long, despite FOMC being on the calendar, attention has been on Friday’s NFP for US-centric data. Also, due to the heavy bias for Macron in Sunday’s election, NFP appears to be the market-moving event for the week as FOMC confirmed what was known and failed to rattle markets. In watching NFP tomorrow, we encourage you to be on the watch specifically for Average Hourly Earnings (AHE). AHE is a key input to inflation readings and the details that spell out the health of the labor market and likely inflation picture to be seen. Year-over-Year, AHE is expected to rise by 2.7% and 0.3% month-over-month. A large miss in AHE could put a new light from the Fed’s perspective on transitory vs. here-to-stay weakness. 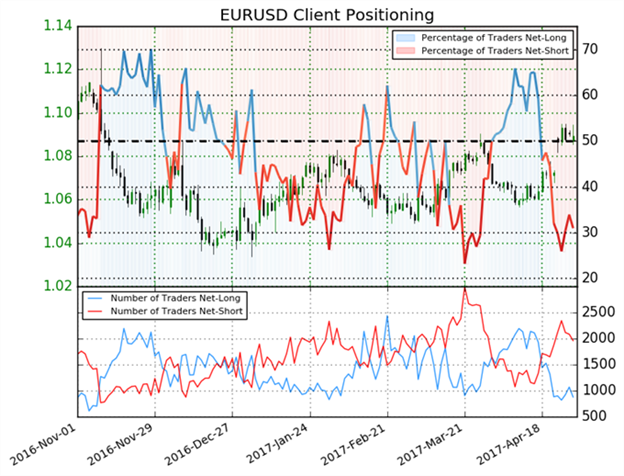 EURUSD: As of May 4, IG retail trader data shows 31.0% of traders are net-long with the ratio of traders short to long at 2.23 to 1. In fact, traders have remained net-short since Apr 18 when EURUSD traded near 1.06407; price has moved 2.4% higher since then. The number of traders net-long is 9.5% lower than yesterday and 10.6% lower from last week, while the number of traders net-short is 9.7% lower than yesterday and 17.9% higher from last week.

We typically take a contrarian view to crowd sentiment, and the fact traders are net-short suggests EURUSD prices may continue to rise. Positioning is less net-short than yesterday but more net-short from last week. The combination of current sentiment and recent changes gives us a further mixed EURUSD trading bias.(Emphasis Mine)