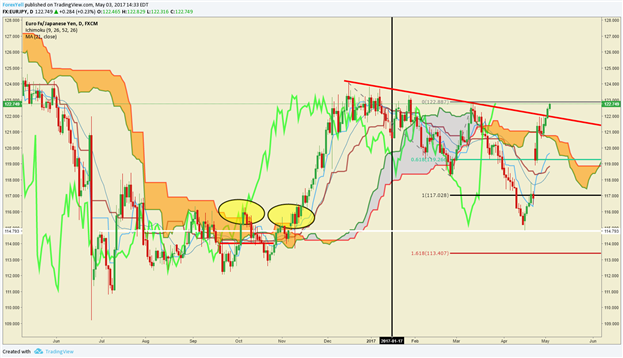 Want to know what our analysts think about USD? You may enjoy our FREE Dollar Forecast.

On Wednesday afternoon, the USD firmed up after the FOMC decision that informed markets that the Fed is looking through the soft data and seeing it as “transitory.” Second, the Fed noted in the statement where rates remained unchanged that they still expect to move forward later in the year with reinvesting the balance sheet, which is synonymous with shrinking their balance sheet, which ballooned through multiple QE attempts. USD strength was best seen vs. the Japanese Yen and other higher yielding currencies like the AUD, which fell 1.5%.

JPY weakness remains a theme worth watching as Japan provides no liquidity due to the Golden Week holiday that has markets closed. USD/JPY is catching the eye of technical traders as the daily chart shows a price move above the Daily Ichimoku Cloud as well the 61.8% retracement of the March-April range. USD/JPY is positively correlated with higher US Yields, which was the FOMC result of the rates market after the Fed statement kept the probability of a June rate hike high.

Lastly, the commodities sell-off continues as evidenced most clearly through silver and gold. Silver worked on its 12th day lower. The 12 down days makes this current bear run in silver the worst since 2001. Similarly, Crude Oil and Copper were sold on the day. Crude Oil traded near a six-week low as US production is at the highest levels since August 2015 and similarly high copper inventories saw copper drop by over 3.5% intraday.

Would you like to see what our Analysts Forecast for JPY longer-term? Find out here!

Thursday provides three central bankers speaking across the globe. First, we will hear from RBA Governor Lowe. He will be speaking on Household Debt, Housing Prices & Resilience in Brisbane. Next, Mario Draghi (ECB) speaks in Lausanne, Switzerland. Lastly, Bank of Canada Governor Stephen Poloz will speak in Mexico City. All central bankers will be looked to provide hints about changes in monetary policy though Lowe appears to be the only one with the platform to surprise the markets. 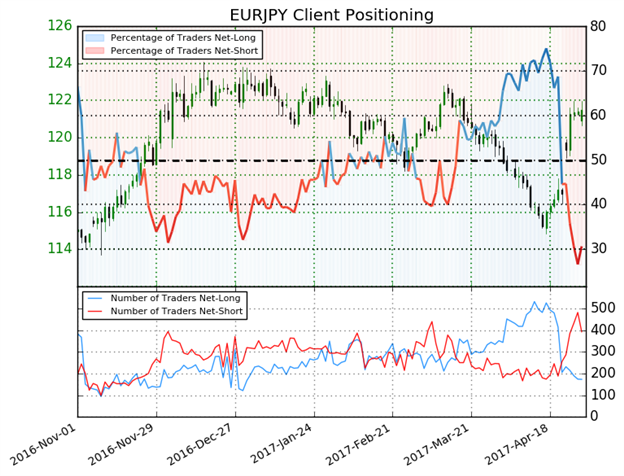 We typically take a contrarian view to crowd sentiment, and the fact traders are net-short suggests EURJPY prices may continue to rise. Positioning is less net-short than yesterday but more net-short from last week. The combination of current sentiment and recent changes gives us a further mixed EURJPY trading bias. (Emphasis Mine)