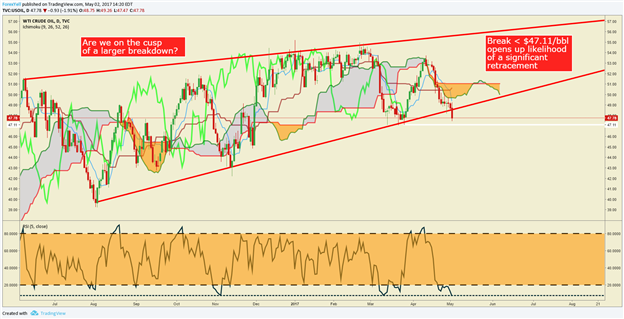 USD Sits Near Support Ahead of FOMC & NFP, CAD at 14-Month Lows

Enjoy Trading FX? You may enjoy our FREE trading guides.

Ahead of tomorrow’s FOMC meeting, the USD fails to catch a bid. However, when one looks at the data, it’s not surprising. Tier-1 economic data has been consistently weak, and it has led some traders to wonder whether or not it is enough to get the Fed to mention that a further weakening in the US economic data could turn the sure-fire three-hike plan in 2017 into a two-hike plan. Few are expecting such a disclosure, but even a mild FOMC followed by a soft-NFP could be enough to send the DXY to new 2017 lows.

Speaking of 2017 lows, the Canadian Dollar has gone the way of Crude Oil and continues to find new sellers. Out of the commodity bloc, the Canadian Dollar or Loonie has been the worst performer, and it could be due to the correlation of the US economy and Crude Oil, both of which are failing to inspire investors at the start of May.

Looking at Crude Oil, the 12% drop since April 12 should have longer-term bulls right worried. We’ve long been watching the late March low ($47.08/11) as support that should hold if the longer-term Bullish structure will maintain any merit. Much of the selling we’ve seen has been without negative Crude Oil headlines and further concessions from OPEC members that a continuation of the supply curb is expected. However, as we’ve noted on the FX Closing Bell webinars, OPEC is starting to sound like the central banks at the start of failed QE programs. The problem with supply and demand economics as the Bank of Japan can attest to, is that it’s difficult to put a specific quantity (as in Quantitative Easing) that will change the emotions of traders worried about the longer-term fundamentals. It could be that OPEC is falling into a similar trap, which could mean we could be in for a bearish summer for crude oil.

Would you like to see what our Analysts Forecast for Crude Oil longer-term? Find out here!

A rate hike is not expected, but guidance is desired. The US data has been very weak, but the speeches from Fed members in week’s past have provided confidence that they will stick to three hikes in 2017. Any evidence that the Fed could shift down expectations to two hikes if the weak data is sustained could give reason enough for USD bears to pile-on. Regardless of the verbiage from Wednesday’s FOMC, NFP on Friday will be judged by what the Fed paints as the expected economic picture going forward and could help guide the USD forward for May. 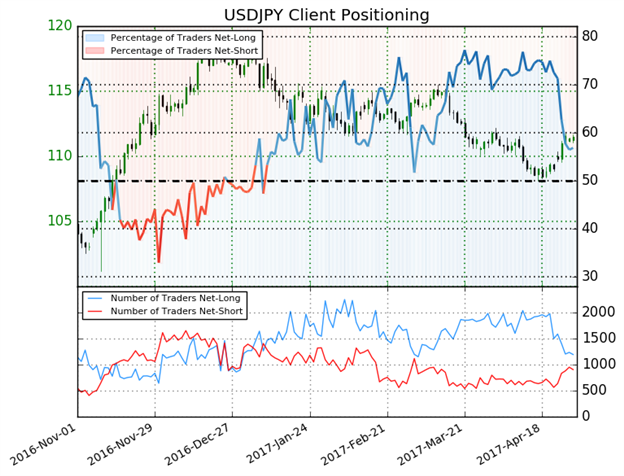 We typically take a contrarian view to crowd sentiment, and the fact traders are net-long suggests USDJPY prices may continue to fall. Positioning is more net-long than yesterday but less net-long from last week. The combination of current sentiment and recent changes gives us a further mixed USDJPY trading bias.(Emphasis Mine)

What is noteworthy to me is that we see aweek-over-week net-shorts increase on multiple JPY crosses. This could be opening up the door for further JPY weakness as we typically take a contrarian view to crowd sentiment.