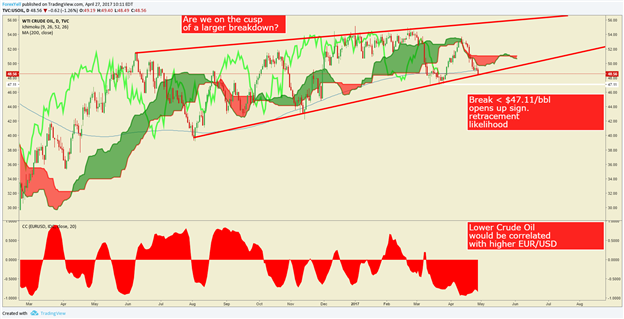 Will EUR ride strong into May? See our forecast to find out!

A question that has not been asked in years is beginning to resurface. Could EUR become the new darling of G10 FX? Sure, the European economy and collective union government have its issues, but it’s fair to ask whether or not the intrinsic value is beginning to diverge for the common currency relative to market price in a positive fashion. In other words, there could be a lot of upside in EUR if the downside risks that once concerned currency traders the world over are diminishing faster than expected.

On Thursday, Mario Draghi was the most impactful central banker, as the ECB acknowledged improvement while remaining cautious. Of course, most central banks are taking that path. However, the ECB statement on Thursday provided little to encouraging the EUR bears who have been on the wrong side of some sharp moves recently.

Sterling remains in the driver seat in G8 FX. On Thursday, GBP/USD is trading near September highs as 1.29 was taken out again. Traders should keep an eye on the possible drift higher toward the top of the range near 1.3445/81. The bottom of the range is the zone that encompasses 1.2866 to 1.2775. A close above 1.2905 on a weekly basis could help signify the GBP rebound could extend.

Lastly, two key developments from today worth watching market follow-through are the Riksbank & Oil. On Thursday, Sweden’s central bank, the Riksbank said they would continue bond purchases into the second half of the year, which caused government bonds to rally and the Krona to drop. Given the support in USD/SEK near 8.75, it’s worth watching to see if SEK weakness continues. Also, Oil continues to trade near critical support of the 200-DMA as sentiment shows that Bulls are loading into the long trade. A breakdown could act as a catalyst for a strong move lower that would cause Oil to align with the broader drop in commodities.

Interested in seeing what IG client’s positioning means for the GBP?Find out here!

Many perceived that Friday’s focus would be on another shutdown of the US government due to spending disagreements. However, at the 11th hour, it seems the US Senate will pass a short-term funding bill to avoid a shutdown. Now, Friday’s focus will fall on Canadian & US GDP, which is a tier-1 release, but most of the ingredients that go into the number are comprised of already known data like durable goods. The European CPI could go a long way in improving EUR sentiment after Draghi noted that risks to the downside are diminishing on Thursday. 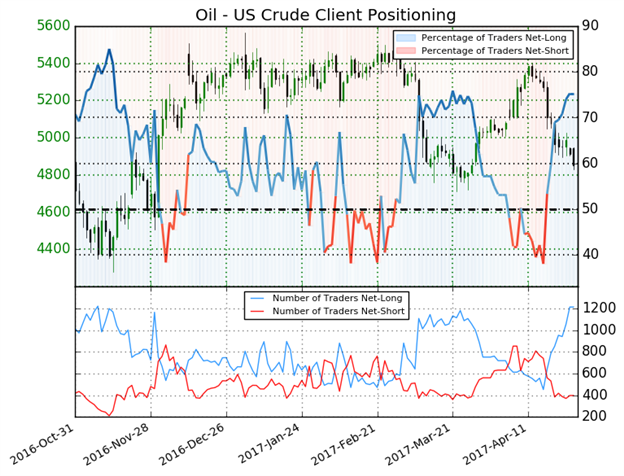 We typically take a contrarian view to crowd sentiment, and the fact traders are net-long suggests Oil - US Crude prices may continue to fall. Traders are further net-long than yesterday and last week, and the combination of current sentiment and recent changes gives us a stronger Oil - US Crude-bearish contrarian trading bias.(Emphasis Mine)