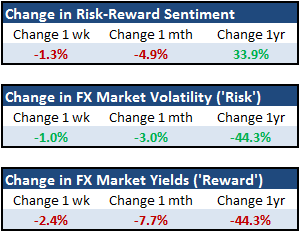 The lull in speculative trends following Hurricane Sandy cleared up rather quickly these past few weeks, and the capital markets seem to have taken the opportunity to concentrate on long simmer fundamental concerns. We are now little more than six weeks until the end of the year – and to speculators all over the world, that means we have little more than six weeks to see a palatable solution to the very considerable Fiscal Cliff in the United States. Where it may have been assumed that the election could clear the way for a resolution to avoid a $600 billion hit to the world’s largest economy (and almost certainly a recession), the posturing seems to have instead intensified. If this particular catalyst were the only concern, the market would have an easy-to-read barometer of ‘risk on’ or ‘risk off’. However, there are additional complications to the otherwise clean picture. The Euro-area crisis may provide a temporary relief as early as next week as a EU ministers meeting on November 20 (Tuesday) is expected to yield a final solution to Greece’s long-delayed €31.5 billion aid payment. Furthermore, the US Thanksgiving holiday can effectively take the steam out of any risk trend – be it bullish or bearish. Position with these disruptions in mind.

Read the Introduction to Risk Trends and the Risk-Reward Indicator Here. 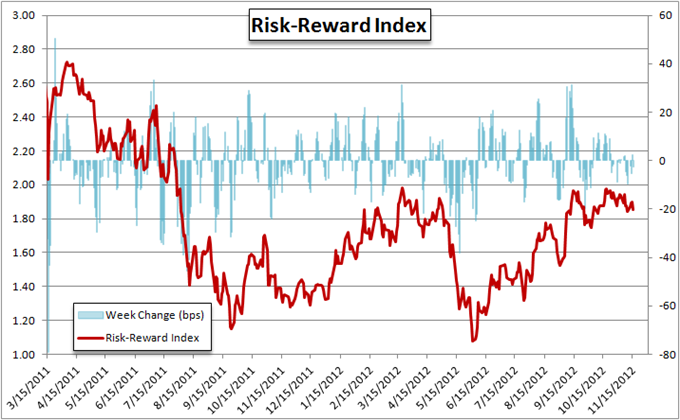 Looking at the Risk-Reward Indicator above (or at the statistical changes at the top of the report), we can see that there has not been a substantial unwinding of general risk trends. In fact, it is still early to judge the bullish trend from the beginning of June officially broken. Technical traders will note that the considerable 2.00 boundary is still acting as immediate resistance while the rising channel from that mid-year swing low still carries momentum behind this fundamental representation of sentiment.

From the breakdown, we find that aggregate yields (‘Reward’) have slid over the past few weeks. This is a reflection of the rising bid for the developed world’s (and AAA-rated) sovereign debt – the favored safe havens for the liquidity-obsessed. It is a long climb before this cumulative yield is not at extremely oversold levels (it is currently just off of recent historical lows), and growth in neither economic activity nor investment interest does not look imminent. On the other hand, the FX Volatility Index (‘Risk’) is just barely rounding off of five-year highs. It is far easier to spark investor fear and expectations of rapid price movement (implied volatility) than it is to return to a solid level of growth – and that means fear is a constant threat.

There has been some argument that the standard volatility measures have lost their appraisal value (as it deviates from some highlights in speculative repositioning), but the buying of insurance is as fundamental a measure of fear as you can find. 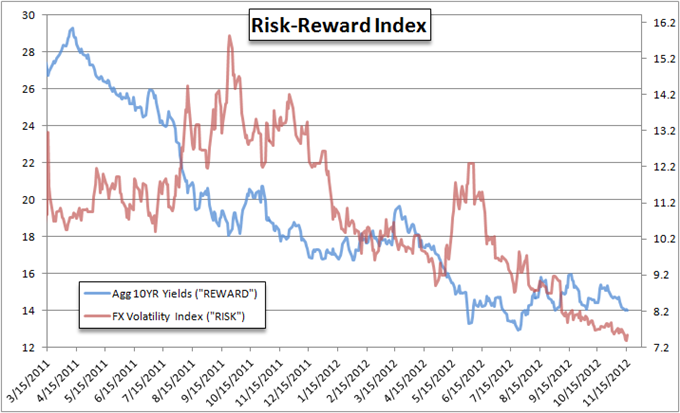 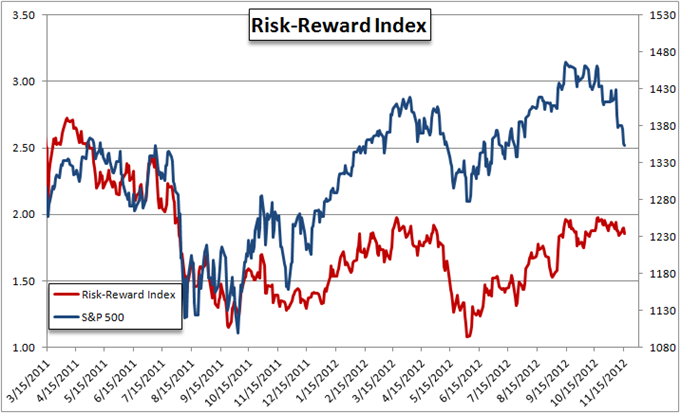 The primary argument for volatility measures (both the equity-based VIX and the Forex-measured FX VIX) is the lack of progress they have made while the S&P 500 has tumbled. However, when we look at other risk-sensitive assets – like the US dollar as a safe haven – they have only recently started to follow suit on the sentiment shift. US equities certainly reflection a balance between measurable return potential versus risk of loss, but there is an additional element there: the moral hazard priced in through stimulus. The level of intervention the Fed has pursued over the past four-years has lowered standard for acceptable yield because risks were considered to be non-existent. Well, that balance has started to tip back the other way. Equities are unwinding excess premium. If that effort growth prolific enough, it can infect the general confidence level in the market and weigh on assets that have far less premium to work down.

Majors Correlation to Risk Trends (How Influential is Risk Appetite)

Below, are charts that show the price action for the majors against the correlation that the pair runs against the Risk-Reward Index. The closer to 1.0 the correlation, the pair will move in lock step with risk appetite (optimism rises and so does the currency pair). On the other hand, the closer a reading is to -1.0 means the closer the pair moves in exactly the opposite direction but at the same pace as risk trends.

This is valuable information for fundamental traders. If you recognize a currency pair is highly correlated (positively: close to 1.0, or negatively: close to -1.0), we know that we should be watching factors that change sentiment to offer us guidance on that particular pair. Alternatively, the closer to 0.0 the reading, we know that there is less influence from risk trends and we can trade independent of that bigger theme. 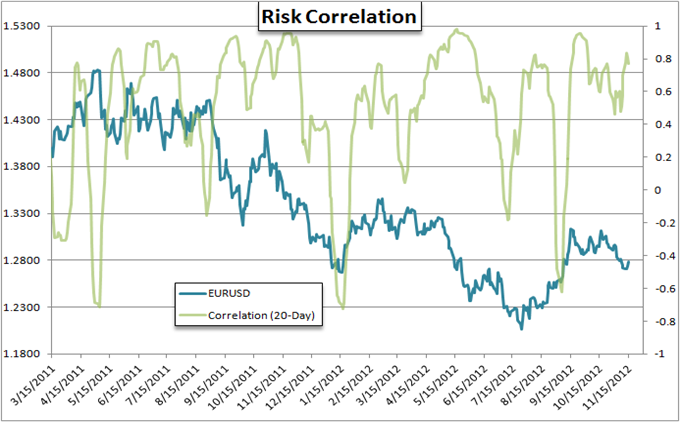 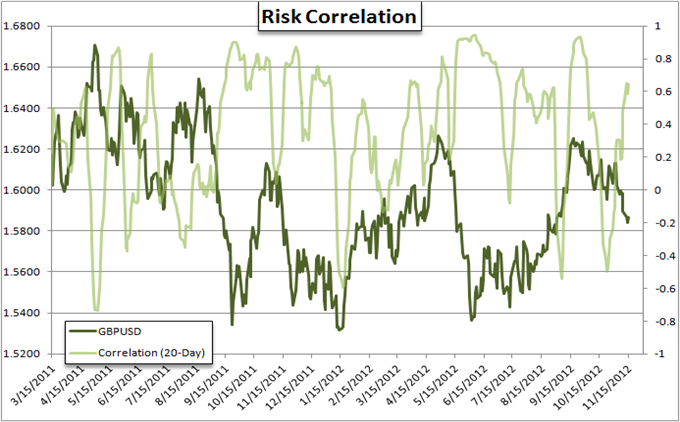 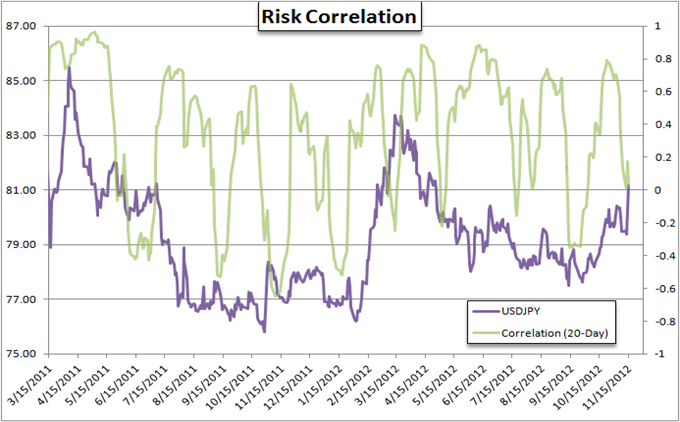 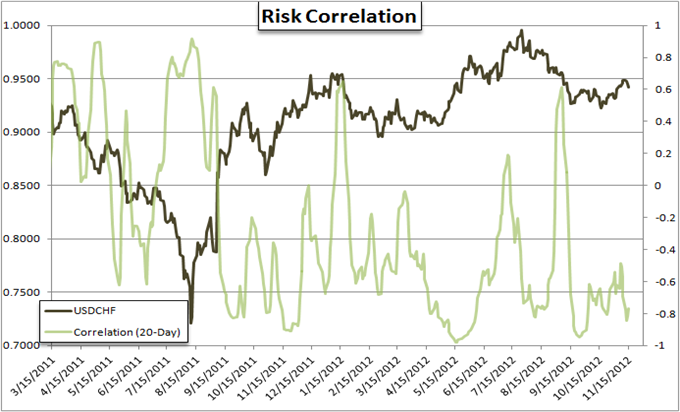 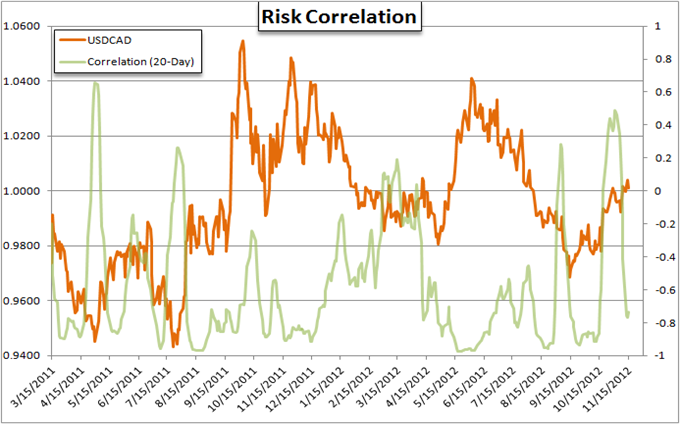