Is the Mute Euro and S&P 500 Reaction to the EU Stress Test Results a Sign of Confidence?

The Committee of European Banking Supervisors released the results of its region-wide stress test on 91 European banks that account for approximately 65 percent of the systems total assets. If we were to go by market reaction alone, it would seem that confidence has prevailed and the results offer a promising future that could alleviate much of the uncertainty that has plagued the markets over the past few months. However, the reaction to this collective event was stunted by liquidity, ambiguity and hesitation. Come Monday, investors may produce a very different response to this ‘positive’ release – a reaction that could very well lead to the next, clear phase of sentiment for the capital markets. The first reason to doubt the markets reserved reaction to today’s event risk is the timing. Strategically released after the close of the European session, only Foreign Exchange traders and US-based market participants were capable of reacting to the results. However, considering this group only accounts for a fraction of the total market; the possibility of a sharp reversal when the markets fill out next week is too much of a risk for short-term speculators and long-term investors alike. As tactical as the release time was, the advantage of extra time to interpret the results may not improve confidence.

By far the greatest flaw to the Stress Test results was the methodology for which the conclusions were calculated. Of the three scenarios that were used to assess the banks’ ability to withstand a slump in the markets and growth, the worst was labeled the “sovereign shock” state. Though it would seem that the situation in this scenario would be a sovereign default, it is in fact based upon private failures that result from a further downturn in the economy. A 20 percent drop in equities, four-step downgrade in the ratings of securitized derivative products and cumulative losses in five year government debt (equaling 23 percent for Greek bonds, 14 percent for Portuguese, 12.3 percent for Spanish and 4.7 percent for German) may seem remarkable; but a default by any one of these governments (or a periphery European economy) could spark a financial crisis that quickly surpasses this damage tally. It is further interesting that the seven banks that reportedly failed the stress tests are tied to government funds. The German government controls Hypo Real Estate, the Greek government owns 77 percent of the Agricultural Bank of Greece and there is a rescue fund that the 5 Spanish cajas that failed can access after the sectors’ consolidation is finally complete. Suggestions by certain officials that this evaluation was very strict or was more stringent than the test the US ran a year ago is disingenuous. The consistency and transparency in the US evaluation was believable because the government required those institutions that fell short to borrow money to meet the requirements. And, a problem that exists in all of these tests is the reality that the smaller banks are the ones most likely to collapse.

Going forward, the reliability of the CEBS’s evaluation will be questioned and pressured by the market itself. However, the greatest threat to financial stability and risk appetite is an unquestionable event that supersedes the tests. A default by Greece would be the most publically destructive situation; but that would take time to develop and aid could cloud the reaction. More feasible is the deterioration of a banking system in one of the member economies. Many financial institutions (like those in Spain) have been cut off from the market by exorbitant yields and diminished foreign investment. Perhaps the most imminent threat to Europe though is a collapse in one of the periphery European nations. Standard & Poor’s warned today that it may downgrade Hungary’s sovereign rating to junk status after the EU and IMF broke off talks to extend another loan on the basis that the nation was not taking the necessary steps to rein in its deficit. All that is needed is a spark to ignite the volatile situation. And, lest we forget, Europe isn’t the only global threat. According to Bloomberg News, regional Chinese governments can only pay off 27 percent of their loans as of today. 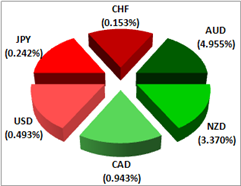 Questions? Comments? You can send them to John at jkicklighter@dailyfx.com.