Another month of headline US inflation topping +5% should catch policymakers’ attention, as Fed Chair Jerome Powell conceded during his Jackson Hole speech that the inflation mandate has been achieved. Should the US CPI report beat expectations again, heightened volatility should be expected across financial markets as it increasingly appears the Fed is being painted into a corner: US data momentum has been deteriorating just as policy normalization efforts come into focus.

After staving off higher inflation pressures for much of 2021, it appears that price pressures are starting to rise in the UK. According to a Bloomberg News survey, the headline August UK inflation rateis due in at +0.5% from 0% (m/m) and +2.9% from +2.2% (y/y), while the core inflation rate (ex-energy and food) due in at +2.9% from +1.8% (y/y). Upside momentum in UK price pressures may help provide greater rationale for the Bank of England to move forth with their stimulus withdrawal efforts, which have already been set in motion after policymakers began normalization earlier this year.

According to a Bloomberg News survey, the August Canada inflation rate (CPI) is forecast to show an increase of +0.1% from +0.6% (m/m) and +3.9% from +3.7% (y/y), while the core reading is due in at +3.4% from +3.3% (y/y). The Bank of Canada's decision to pause policy normalization may be short-lived if the August CPI report shows additional upside price pressures.Canadian elections next week are holding back the Loonie, which continues to diverge from rebounding energy prices. A Trudeau win gives clearance for the Canadian Dollar to re-couple as BOC normalization resumes.

After a series of regional lockdowns, the Australian economy appears to have slowed during the middle months of 2021. According to a Bloomberg News survey, the Australian economy lost-90K jobs in August, a significant drop from the paltry +2K jobs added in July. The unemployment rate is expected to jump from 4.6% to 4.9%. The Reserve Bank of Australia’s decision to trim its QE program while extending its time horizon – ‘lower for longer,’ in a sense – suggests that policymakers foresee economic difficulties ahead, although with vaccination supplies and inoculation rates starting to rise, the worst may be in the rearview mirror.

Consumption is the most important part of the US economy, generating around 70% of the headline GDP figure. The best monthly insight we have into consumption trends in the US might arguably be the Advance Retail Sales report. As data from August has indicated thus far, delta variant concerns provoked a slowdown in the economy that is likely to reflected in consumption figures too. According to a Bloomberg News survey, consumption slumped with the headline Advance Retail Sales due in at -0.8% from -1.1% (m/m) in July. Similarly, the Retail Sales Control Group, the input used to calculate GDP, is due in at 0% from -1% (m/m). 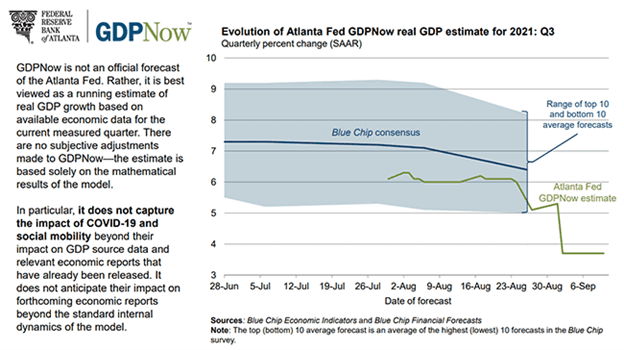 Growth expectations may be harmed further coming out of the data, and the Atlanta Fed GDPNow 3Q’21 growth estimate could fall further below +4%. According to the most recent update provided, this quarter’s growth estimate has fallen from a peak of +6.4% in early-August to its relatively mild +3.7% reading in mid-September.