Consumption is the most important part of the US economy, generating around 70% of the headline GDP figure. The best monthly insight we have into consumption trends in the US might arguably be the ‘retail sales advance’ report. Following a jagged start to the year thanks to the Trump and Biden stimulus checks, it appears that consumption may still be cooling off in their wake.

According to a Bloomberg News survey, headline US retail sales are expected to have contracted by -0.7% m/m in May after posting no change in April. The Atlanta Fed GDPNow 2Q’21 growth tracker, currently at +9.3% annualized, will be updated after the US retail sales data are released.

At the end of last month, Bank of England Chief Economist Andy Haldane said that “an upside surprise to inflation is among the greatest risks,” considering it would lead policymakers “to tighten policy even more rapidly or on a more significant scale, or possibly both, in a way that would take the legs out of the recovery.”

According to a Bloomberg News survey, the May Canada inflation rate (CPI) is forecasted to show an increase of +3.5% from +3.4% (y/y), while the core reading is due in at +2.4% from +2.3% (y/y). These figures, while lofty, are not due to show the same type of acceleration that their American counterparts did just last week. With the Bank of Canada already on course to slow down its asset purchase program, it seems unlikely that higher rates of inflation will translate into greater speculative fervor for a more hawkish BOC in the very near-term (leaving CAD-crosses on their current trajectory).

The Federal Reserve has made clear that it will be keeping rates low and stimulus flowing for the foreseeable future. Setting aside the fact that interest rates hikes won’t rise soon, all focus is on the timing of when the Fed will taper its asset purchase program. Accordingly, the June Federal Reserve meeting is likely to formally kickoff taper talk, insofar as policymakers will acknowledge that we’ve moved from ‘potentially talking about discussions about tapering’ to the actual ‘discussions about tapering.’ 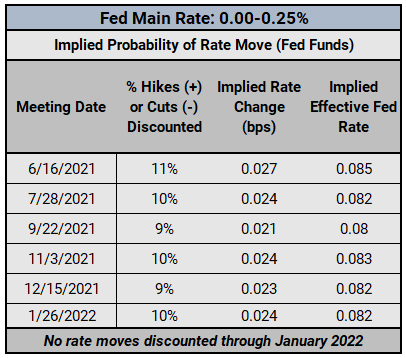 Proving increasingly stable, Fed funds futures continue to discount an approximate 10% chance of a change in Fed rates each monththrough January 2022. Nevertheless, the liquidity drain continues thanks to record high reverse repo volumes across the Fed’s open markets desk. Without a corresponding rise in US Treasury yields, we’re effectively starting off on the course of a tantrumless taper.

There’s been a lot of conversation around the perceived timeline of the Federal Reserve’s plan to taper its asset purchases following the discouraging May US nonfarm payrolls report and the hot May US inflation report. Nevertheless, the it appears that market participants continue to have the taper timeline priced as such:

According to a Bloomberg News survey, the Australian economy added +30K jobs in May, effectively offsetting the -30.6K pace in April. The internal metrics last report was actually quite good: among the net -30.6K jobs lost, there was actually a gain of +33.8K full-time jobs. The continued churn (part-time jobs lost, full-time jobs gained) is a positive development for the Australian economy longer-term. But ‘churn’ appears to be the apt description: despite the anticipated gain in headline jobs growth, the Australian unemployment rate is forecast to stay on hold at 5.5%.

Considering that the Reserve Bank of Australia is indicating that it will keep rates low for several more years as it struggles to achieve its symmetric +2% inflation target, the forthcoming jobs data may ultimately come and go without much of an impact on the Australian Dollar (or AUD-denominated assets).