The November US inflation (CPI) report will be released on Friday, December 11 at 13:30 GMT. According to a Bloomberg News survey, astabilization in price pressures is anticipated with the headline inflation rate due in at 1.1% y/y from 1.2% y/y in October, while core inflation is due in unchanged at 1.6% y/y.

Marginally weaker price pressures may not do much to move the needle on Federal Reserve monetary policy, which remains exceptionally accommodative. To this end, the Fed intends on keep interest rates low through 2023. If inflation were to rise in the coming months, the greatest boost could come from the next tranche of US fiscal stimulus. 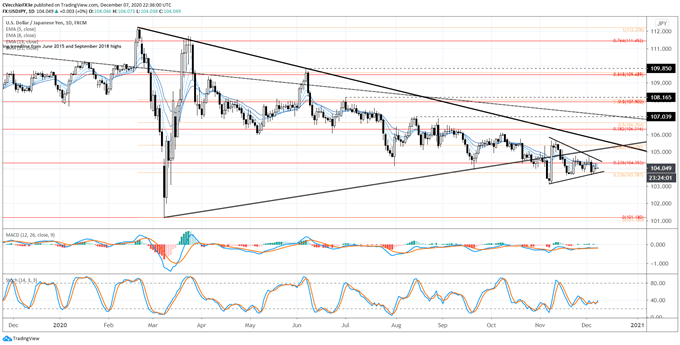 USD/JPY rates have slowly broken down through symmetrical triangle support, with the exit beginning in early-November. The loss of the uptrend dating back to the March and September swing lows proved magnetic for some weeks. Now, USD/JPY rates are consolidating in a short-term symmetrical triangle just below said uptrend, trading around both the 23.6% Fibonacci retracement from the 2018 high/2020 low range at 104.35 and the 23.6% Fibonacci retracement from the 2020 high/low range at 103.79.

Momentum has been flat in recent days, if not slightly tilted bearish. USD/JPY rates remain below the daily 5-, 8-, 13-, and 21-EMA envelope, which itself is in bearish sequential order. Daily MACD is trending flat below its signal line. However, Slow Stochastics are rising back towards their median line, another indication price action has been listless. A breakout of the symmetrical triangle that’s formed since early-November would be the best clue as to the next directional move in USD/JPY rates. 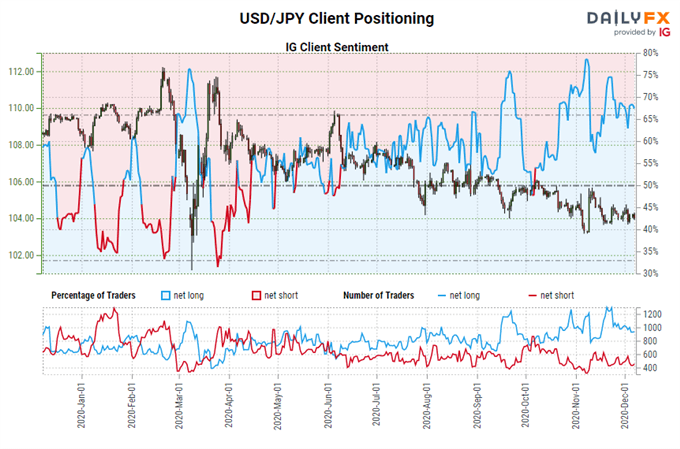 Yet traders are less net-long than yesterday and compared with last week. Recent changes in sentiment warn that the current USD/JPY price trend may soon reverse higher despite the fact traders remain net-long.