After data last week showed the US trade deficit at record – further enflaming US President Donald Trump – upcoming data on the other side of the Pacific Ocean will show that the US-China trade war is having its own disappointing impact. The upcoming September Caixin China PMI reports are due to show that the Chinese economy continues to remain at a slower pace of growth that what has typically been experienced in recent years.

American and Chinese officials are meeting this week in Washington, D.C. in order to try and come to terms on a trade deal. Low-level officials are meeting each of the next two days, while high-level talks will begin on Thursday. The Trump administration confirmed that US Trade Representative Robert Lighthizer and US Treasury Secretary Steve Mnuchin would be in attendance alongside Chinese Vice Premier Liu He. 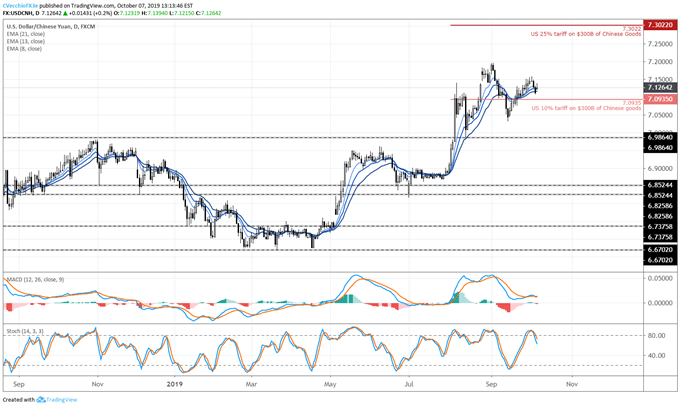 The persistent threat of escalation in the US-China trade war directly threatens USDCNH insofar as Chinese officials have been using the Chinese Yuan as a policy tool. It still holds that US President Trump may step up

As such, USDCNH should hit at least 7.3022 if US President Trump escalates the trade war further by increasing the tariff to 25% on $300 billion of Chinese goods.”