The Brexit saga is cresting. With UK Prime Minister Boris Johnson’s prorogation of parliament enraging MPs, the political body will meet on Tuesday to try and take back control of the Brexit process. A vote on Tuesday afternoon will determine whether the UK parliament will control its own schedule; if the vote fails, the prorogation will begin as early as September 9, effectively sidelining parliament for the rest of the Brexit process. But if the vote passes, then it’s entirely likely a series of steps leads to a no confidence vote in UK PM Johnson, and perhaps ultimately a snap general election. Traders should be anticipating a high degree of volatility across the GBP-crosses.

According to a Bloomberg News survey, the Australian economy grew by 1.4% in Q2’19, down from the still meager 1.7% pace reported for Q1’19. Even as Australia’s current account surplus has grown dramatically in recent quarters, the overhang of the US-China trade war has tempered Australian business and consumer confidence, investment, and spending.

Coming the day after the September Reserve Bank of Australia meeting where the main rate was kept on hold at 1.00% and officials weren’t completely committed to cutting rates next month, overnight index swaps are showcasing some uncertainty regarding the timing of the next move. For now, the October RBA meeting remains the most likely time for a 25-bps rate cut, with a 61% chance according to overnight index swaps. While there is a 50% chance that the main rate will be 0.50% by December 2019, there is also an 11% chance that the main rate will be 1.00% by December 2019. This dissonance in rate expectations is a hallmark of a trading environment defined by volatility.

The Canadian Dollar weakened sharply at the start of last month, and despite lots of volatility, no real progress has been made on the price action front since the second week of August. Part of this may be due to the fact that oil prices haven’t really done much themselves in recent weeks, having carved out a range effectively between 50 and 60 since the end of May.

The Canadian economy, in turn, hasn’t seen growth rates go boom or bust in recent months, keeping the BOC at bay in terms of joining the “race to the bottom” among the other major central banks. At the forthcoming September BOC meeting, amid no sense of urgency on the domestic side of things, overnight index swaps are only pricing a 6% chance of a 25-bps rate cut. 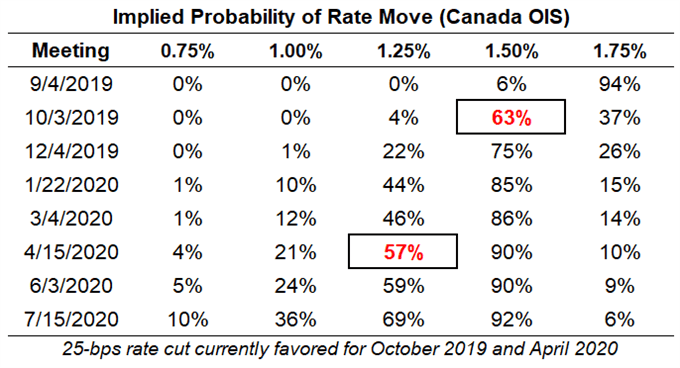 However, with the ECB and FOMC expected to act soon, rates markets are pricing in a 63% chance of a 25-bps rate cut at the October BOC meeting. Rates markets foresee a period of neutrality by the BOC thereafter, if not defined by a dovish tone; another 25-bps rate cut is priced-in for April 2020.

Coming just days after the September BOC meeting, the August Canada jobs report due out on Friday is unlikely to have a significant impact on BOC interest rate expectations. Put simply, when arriving at their decision on Wednesday, BOC policymakers will already be aware of the labor market figures, and thus, the rates market reaction may be limited around the August Canada jobs report.

The Canadian labor market is looking for a rebound in August after a disappointing July. Bloomberg News consensus forecasts foresee jobs growth rebounding to 20K last month after dropping by -24.2K in the month prior. The unemployment rate is due to stay on hold at 5.7% after rising from its 2019 low of 5.5% last month.

The US labor market remains a pillar of strength for the US economy, and, despite lingering concerns about the US-China trade war, expectations remain buoyed. Following the print of 164K in July, Bloomberg News’ consensus forecast is looking for 160K jobs to have been added in August. As a result, forecasts point to the unemployment rate staying on hold at 3.7%, just off the cycle low of 3.6%.

A ‘goldilocks’ US jobs report may complicate the picture for the Federal Reserve. Rates markets continue to grapple with the degree to which the FOMC will cut interest rates later this month, if at all; it doesn’t seem like the August US jobs report will help provide clarity, one way or the other. As such, the US Dollar reaction may remain muted unless there is a sharp swing in Fed rate expectations.

According to the Atlanta Fed Jobs Growth Calculator, the economy only needs 107.3K jobs growth per month over the next 12-months to sustain said unemployment rate at its current 3.7% level.