Caixin China PMI readings for August are expected to cross the wires this week starting Monday at 1:45 GMT and aim to set the tone for risk appetite throughout the week. In contrast to the country’s official PMI readings from its National Bureau of Statistics, which reports on large state-owned firms, the Caixin China PMI data covers a wider sample of small and medium sized businesses.

Although the two reports generally move in lockstep, markets consequently tend to place more credence on the Caixin PMI figures. Nevertheless, the national Chinese manufacturing PMI reading for August was already published late Friday and showed the sector remains in an economic contraction. 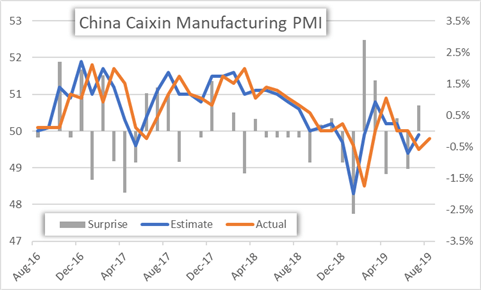 That said, the Caixin China manufacturing PMI reading for August is expected to come in at 49.8 as the US-China trade war bites the Asian economy. Although, the Caixin PMI reading for July improved slightly to 49.9 from 49.4 in May. The month of May witnessed a marked escalation in trade tensions, however, and August’s tit-for-tat tariff whiplash from Beijing and Washington poses a downside risk to manufacturing activity in addition to market sentiment. That said, traders will likely keep close tabs on spot USDCNH as uncertainty surrounding the US-China trade war lingers and the trading week progresses. 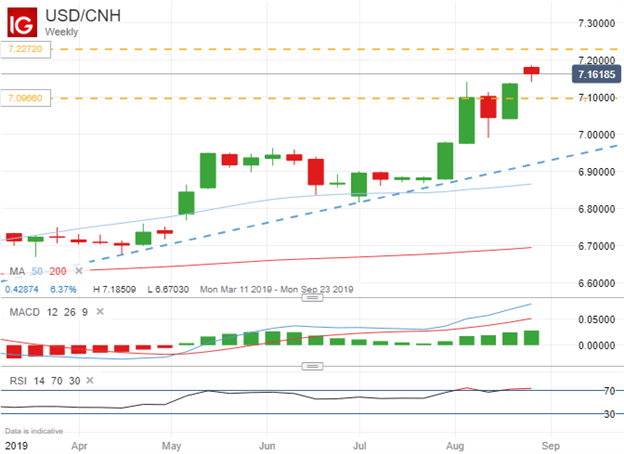 We noted previously how the Chinese Yuan could serve as a US-China Trade War Barometer seeing that the PBoC has intervened to depreciate the country’s currency to offset the impact of Trump’s tariffs. PBoC currency intervention is just one of the central bank’s many stimulus efforts directed at combatting the economic impact from the US-China trade war. Consequently, further Yuan depreciation – or rise in spot USDCNH – could be interpreted as a sign that trade tensions remain elevated and may even escalate further. 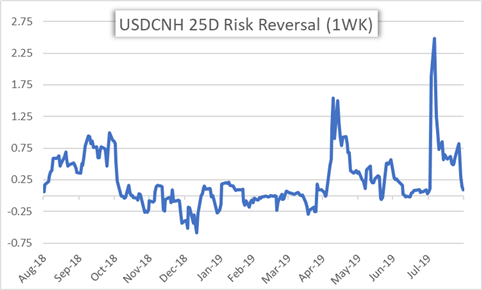 Yet, according to USDCNH 1-week implied volatility of 7.79%, the Chinese Yuan is estimated to fluctuate between 7.0966-7.2272 with a 68% statistical probability. As such, a significant breach of this 1-standard deviation option implied trading range could suggest a material shift in the trade war.

Also, it is worth mentioning that the Chinese Yuan still sank to its lowest level against its US counterpart since February 2008 last week – even despite the supposed cease-fire and restarting of trade talks after tensions quickly flared up the week prior. But, the 1-week USDCNH 25-delta risk reversal reading has drifted lower and sits near zero meaning demand for call options has waned and is now roughly on par with demand for put options. A quick spike higher in this metric could indicate that spot USDCNH prices face upward pressure.