August services data is due Thursday from the Institute of Supply Management and will be one of the more important scheduled events for traders to watch. The data will offer insight on the state of services in the United States, a sector that is responsible for nearly 80% of the country’s GDP. Consequently, a surprise reading in either direction could have serious implications on monetary policy and corporate earnings.

July’s data revealed economic activity in the non-manufacturing sector grew for 114 consecutive months, coming in at 53.7% - where any reading above 50% constitutes expansion. That said, July’s reading was 1.4% lower than June and notched the Index’s lowest figure since August 2016 when it registered 51.8%. While remaining in expansionary territory, ISM committee members highlighted continued cooling in the sector with respondents issued concerns related to tariffs and employment resources. Given that the newest tranche of tariffs facing China will go into effect on September 1, the report will likely contain further commentary regarding trade war uncertainty.

Meanwhile, USDJPY looks to be one of the more volatile currency pairs in the week ahead – somewhat unsurprising given the whipsaw it experienced in August alongside equity markets. With an implied volatility of 8.84% and the resultant implied trading range of 105.15 to 107.35, USDJPY could look to target the topside of its recent range. Such a move would likely require a notable shift in fundamentals, which could potentially be delivered by shifting rate cut odds from the Federal Reserve or a US-China trade war development. For a more in-depth look at USDJPY for the coming days, check out James Stanley’s US Dollar Price Outlook. 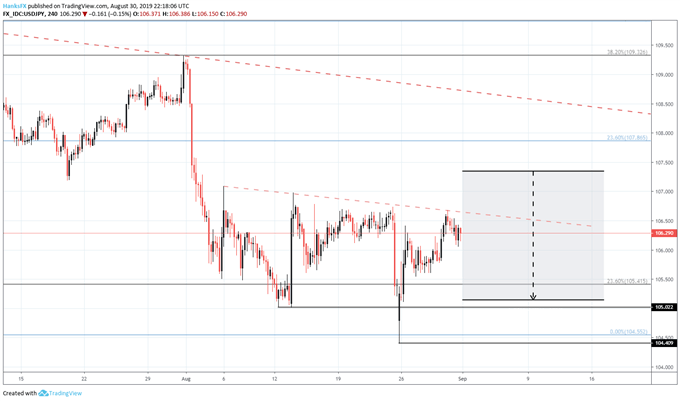