On Thursday, US trade figures for July will show that the US has its largest trade deficit ever, another development surely to displease US President Donald Trump and his administration's trade representatives.On Saturday, the Chinese Manufacturing PMI reading is due to show that the manufacturing sector remained in contraction with the index due below 50. The fact of the matter is that US consumers are buying few products from Chinese producers, raising the costs of goods in the US and reducing economic activity in China.

With the latest twists and turns in the US-China trade war, it seems likely that expectations for any sort of substantive agreement between the US and China in the coming weeks are low; and traders should obviously expect some retaliation by US President Trump. 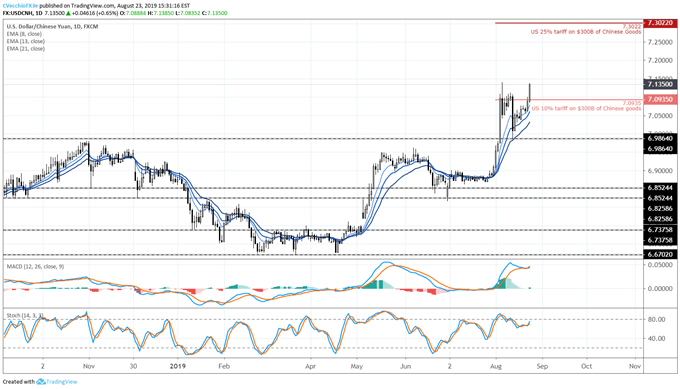 Per the our last USDCNH technical forecast update, the threat of escalation in the US-China trade war directly threatens USDCNH insofar as Chinese officials are now aggressively using the Chinese Yuan as a policy tool. To this end, nothing has changed:

“Moving forward, the threat of stepping up the Trump tariffs from 10% to 25% on $300 billion of goods would mean that markets need to factor in the remaining 15% of the tariffs; Chinese economic activity will decline by approximately $45 billion at this rate. To offset a potential $45 billion in lost trade, then the Chinese Yuan will need to lose another 3% from where it closed on Monday, August 5.

If Trump steps up the latest round of tariffs from 10% to 25%, the Chinese Yuan will require another 3% depreciation from its close on Friday, August 2 to offset the increased tariffs; total depreciation needed by the Chinese Yuan to fully offset the 25% tariffs on $300 billion of goods is 5% from where it closed on Thursday/opened on [Friday, August 2].

As such, USDCNH should hit at least 7.3022 if US President Trump escalates the trade war further by increasing the tariff to 25% on $300 billion of Chinese goods.”