Join us on Mondays at 7:30 EDT/11:30 GMT for the FX Week Ahead webinar, where we discuss top event risk over the coming days and strategies for trading FX markets around the events listed below.

According to a Bloomberg News survey, the first revision to the Q2’19 Eurozone GDP report is due but no change is expected. The quarterly rate is due in on hold at 0.2% while the yearly rate is set to hold at 1.1%. Consistently weak growth figures should serve to reinforce the European Central Bank’s Governing Council’s view that risks have moved “to the downside,” and to this end, that more easing will arrive in September when the ECB releases the next iteration of its Staff Economic Projections. Overnight index swaps are currently pricing in a 100% chance of a 10-bps rate cut at the September ECB meeting, while there is an 82% chance of 20-bps of rate cuts by the end of 2019. 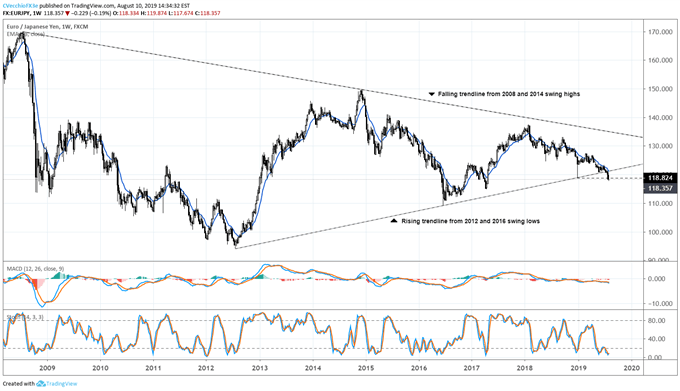 The EURJPY selloff that has transpired over recent weeks has represented a significant downside break of a multiyear symmetrical triangle dating back to 2008. Now that the weekly timeframe suggests a loss of triangle support and recent swing support at the January 2019 Japanese Yen flash-crash low at 118.82, we may be witnessing the early phases of what could be a long-term downtrend. Indeed, it appears that the bearish policy concerns that undergirded the Top Trade Idea 2019: Short EURJPY are coming to fruition (the trade has already achieved its yearly price target). 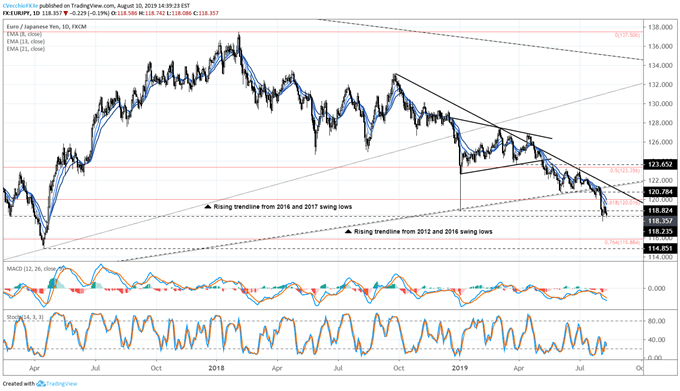 With the weekly timeframe clearly exhibiting overt bearish momentum, the recent break low looks more ominous on the daily timeframe. EURJPY closed last week below the January 2019 Japanese Yen flash-crash low of 118.82 by posting a close at 118.36, in effect serving as a measure of confirmation that the predominant trend will be lower for the foreseeable future.

As long as EURJPY prices are below the daily 8-, 13-, and 21-EMA envelope while both daily MACD and Slow Stochastics trend lower in bearish territory and below their neutral line, respectively, the path of least resistance will remain to the downside. Near-term price targets may come at the late-February 2017 swing low near 118.24 and the 76.4% retracement of the 2016 low to 2018 high range at 115.88. 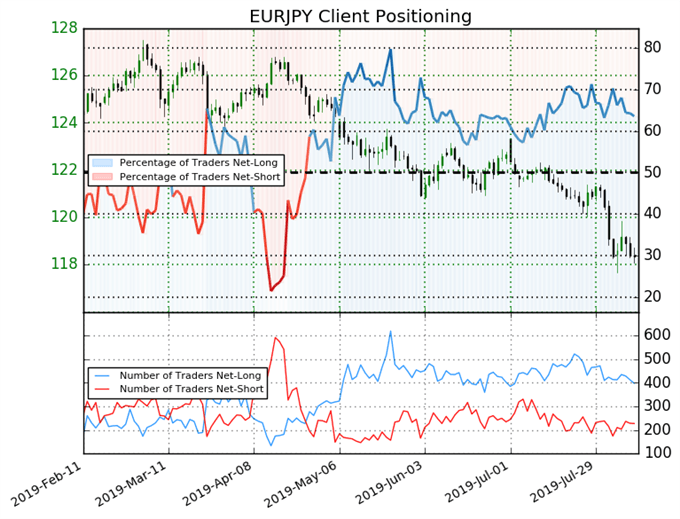