According to a Bloomberg News survey, July will make it 1months in a row with positive jobs growth. Australian employment is due to have increased by 14K last month, and for the fourth consecutive month, the unemployment rate is set to hold at 5.2%.

Despite a dramatic 50-bps by its southern neighbor in the Reserve Bank of New Zealand in August, rates markets still don’t see the Reserve Bank of Australia cutting rates until October 2019. But that doesn’t mean a bit more tumult on the US-China trade war front can’t provoke action sooner; there is a 47% chance of a 25-bps rate cut at the September RBA meeting. 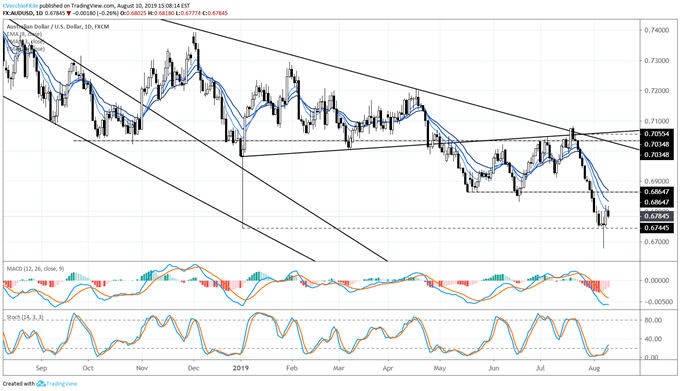 In our last AUDUSD technical forecast, it was noted that “the path of least resistance remains to the downside…Traders may see AUDUSD’s yearly low challenged, set on January 3 around the Yen flash-crash, at 0.6745 over the coming sessions.” Indeed, a fresh yearly low was established since then, with AUDUSD falling as low as 0.6677.

Despite the rebound in recent days, the path of least resistance indeed remains to the downside. AUDUSD traded higher into, but was rejected, by the daily 8-EMA, and is still comfortably below its daily 8-, 13-, and 21-EMA envelope. Daily MACDcontinues to trend lower;meanwhile, Slow Stochastics are still below their neutral line, even if the indicator has started to rise out of oversold territory. Until the daily 8-EMA is breached – AUDUSD has closed below it every session since July 24 – there is little reason to look higher. 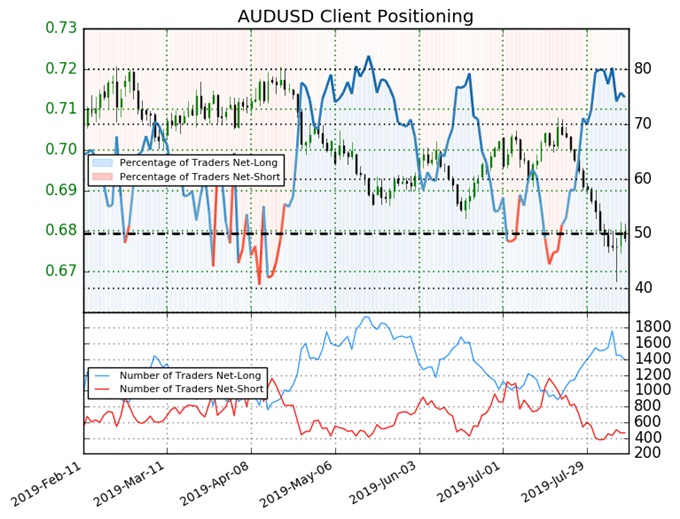