Since the last Reserve Bank of Australia rate decision on July 2, the Australian economy has not made any meaningful progress, nor really has it done much negative: economic data trends have been flat. The Citi Economic Surprise Index for Australia, a gauge of economic data momentum, gained from 1.8 on July 2 to 2.2 by Friday, August 2.

The two big New Zealand data releases in the interim period since the June RBNZ meeting both suggested that the RBNZ economy was on mixed footing. Q2’19 New Zealand inflation data showed that price pressures were exactly as economists forecasted, at 0.6% (q/q) and 1.7% (y/y) – an increase from prior levels, but still below the effective 2% medium-term target. Elsewhere, the most recent labor market report showed that the New Zealand economy saw its unemployment rate creep higher to 4.3% in Q2’19.

With the US-China trade war raging, and evidence starting to emerge that global growth is being dragged down in the process, the RBNZ seems likely to take additional steps to shore up the economy. Overnight index swaps are pricing in a 99% chance of a 25-bps rate cut at the August RBNZ meeting and there is a 71% chance of a final 25-bps rate cut this year by November.

With global trade concerns heating up thanks to the US-China trade war, countries dependent on manufacturing processes have seen a more difficult trade environment. Japan has been unable to avoid the collateral damage from the fallout of the trade war between the world’s two largest economies. According to a Bloomberg News survey, Q2’19 Japan GDP is due in at an annualized pace of 0.6%, down sharply from the 2.2% clip recorded in Q1’19. Even when looking at the GDP report from the quarterly periodicity perspective, there is little to like: 0.1% expected from 0.6%.

Concerns over a hard Brexit have flared in recent weeks, thanks largely to the ascendance of Boris Johnson as the next UK prime minister and his desire to leave the European Union on October 31, deal or no deal. But even before UK PM Johnson took control of 10 Downing Street, it was clear (thanks to the polls) that a no deal, hard Brexit leader was likely to head up the UK government.

Overall, the Citi Economic Surprise Index for the UK, a gauge of economic data momentum, plummeted from 16.4 to -43.7 over the course of the first quarter. Accordingly, the Bloomberg News consensus forecast for the Q2’19 UK GDP report calls for no growth on a quarterly basis and a slowdown to 1.4% from 1.8% on an annualized basis.

The Canadian labor market is looking for a rebound in July after a soft June. Bloomberg News consensus forecasts call for the July Canada jobs report to show that the economy added 15K jobs after losing -2.2K in May. Nevertheless, 2019 has been a good year for the Canadian jobs market, averaging 41.3K jobs added per month as the unemployment rate has come down to 5.5%, where it due to stay on hold. 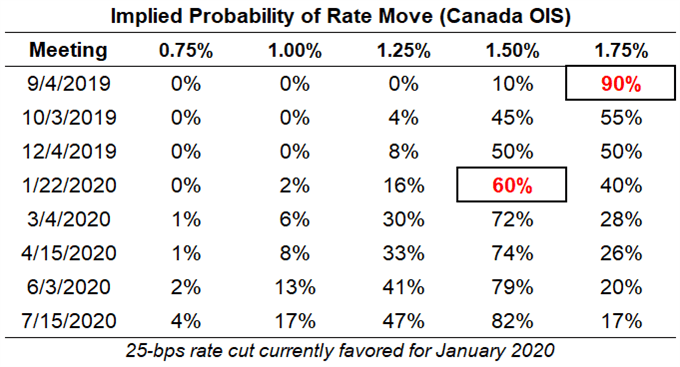