Since the last Reserve Bank of Australia rate decision on July 2, the Australian economy has not made any meaningful progress, nor really has it done much negative: economic data trends have been flat. The Citi Economic Surprise Index for Australia, a gauge of economic data momentum, gained from 1.8 on July 2 to 2.2 by Friday, August 2. While there wasn’t an Australian GDP report released during this timeframe, there was the Q2’19 Australia inflation report that showed price pressures steadily increasing: 0.6% versus 0.5% expected, from 0% (q/q); and 1.6% versus 1.5% expected, from 1.3% (y/y).

If anything, recent developments from around the world, particularly concerning the US-China trade war, are likely to have a great influence on RBA policy in the near-term than any particular domestic development in Australia.

Prior to the July Fed meeting, rates markets were not expecting any shot of the RBA following suit with a rate cut of its own at the August policy meeting. But with the imposition of the next round of Trump tariffs on China, the US-China trade war is escalating again, increasing the odds of a more significant slowdown in the global economy.

Nevertheless, it remains unlikely that the August RBA meeting produces any change in policy, with overnight index swaps pricing in only a 9% chance of a 25-bps rate cut. But to be clear, these odds were 0% midweek; expectations are quickly rising that the RBA could act as early as October, where overnight index swaps are now pricing in a 61% chance of a rate cut; odds for a September rate cut stand at 44%. Another boost to the dovish language deployed at the August RBA meeting may be enough to keep bearish momentum going in the AUD-crosses. 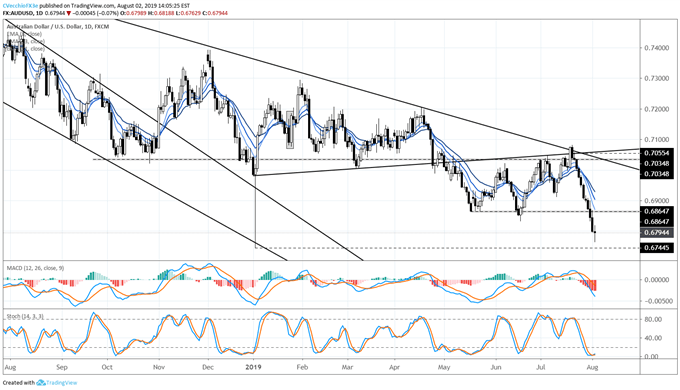 The failed breakout attempt by AUDUSD in mid-July above the descending trendline from the June 2018, December 2018, and April 2019 highs has led to a precipitous spillover in recent weeks. Price action in AUDUSD has been extremely weak, with eleven straight days of losses materializing (or at least on pace to materialize) at the time this report was written on Friday, August 2.

To this end, the path of least resistance remains to the downside. AUDUSD is comfortably below its daily 8-, 13-, and 21-EMA envelope. Meanwhile, Slow Stochastics are nestled in oversold territory – not uncommon during extended periods of weakness. Daily MACD, on the other hand, continues to trend lower, deeper below its signal line in bearish territory. Traders may see AUDUSD’s yearly low challenged, set on January 3 around the Yen flash-crash, at 0.6745 over the coming sessions. 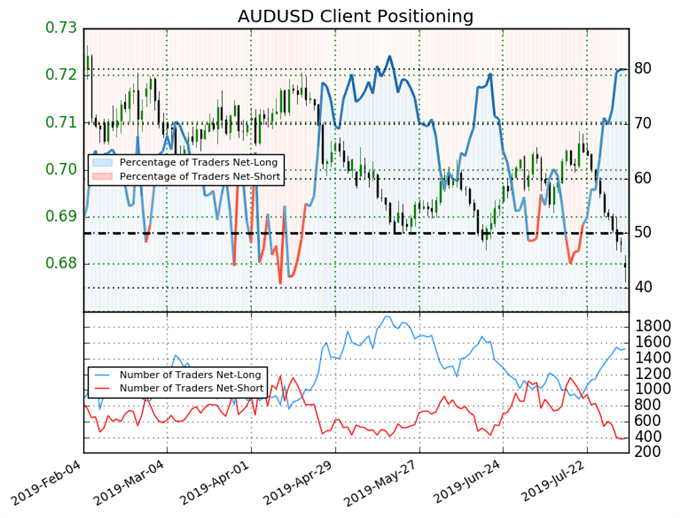