- AUDUSD technical analysis studies suggest that the 2019 low may be tested once again, opening the door for a move to the September 2015 swing low.

- Retail traders are currently net-long AUDUSD, and have remained net-long since April 18; during that timeframe, AUDUSD fell by -2.3%.

Not much has changed for the positive in the weeks since the last time the Reserve Bank of Australia met. The Q1’19 Australia inflation report showed that price pressures were weaker than expected, coming in at 1.3% versus 1.5% (y/y). March Australia retail sales were weaker as well, coming in at 0.2% from 0.8% (m/m). On balance, the Citi Economic Surprise Index for Australia, a gauge of economic data momentum, fell from 45.6 to 37.3 since the April RBA meeting. 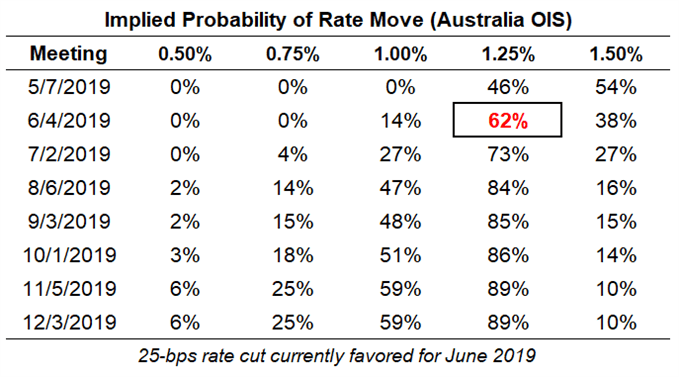 In the interim period since the last RBA meeting in April, rates markets have steadily pulled forward expectations of a 25-bps rate cut into the first half of 2019. Currently, there is a 46% chance of a cut at the May meeting (more context: up from 38% at the end of last week).

But prior to the April RBA meeting, overnight index swaps were pricing in a 30% chance of a cut by June; ahead of the May RBA meeting, odds of a 25-bps cut in June have risen to 62% (more context: up from 59% at the end of last week). Considering these developments, it seems very likely that the RBA will use its May meeting to clarify the timing of when the first expansionary monetary policy move will be made. 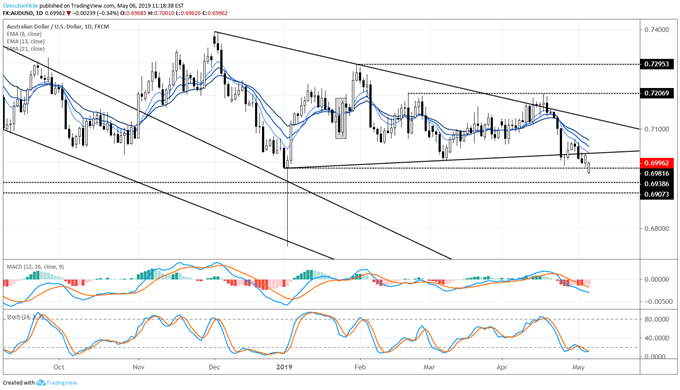 Technical analysis studies show that AUDUSD price action has weakened considerably in recent weeks. By the end of last week, AUDUSD had fallen back towards its closing low for 2019, set on January 2 ahead of the Japanese Yen flash crash. With price below its daily 8-, 13-, and 21-EMA, and both daily MACD and Slow Stochastics trending lower in bearish territory, momentum is firmly to the downside.

A break of the 2019 low at 0.6982 would open the door for a move back towards the September 2015 swing low around 0.6907 in the near-term. Otherwise, only if AUDUSD were to return above the daily 13-EMA, which coincides with lows established in late-March and early-April (0.7057), would the short-term bearish price forecast be no longer appropriate. 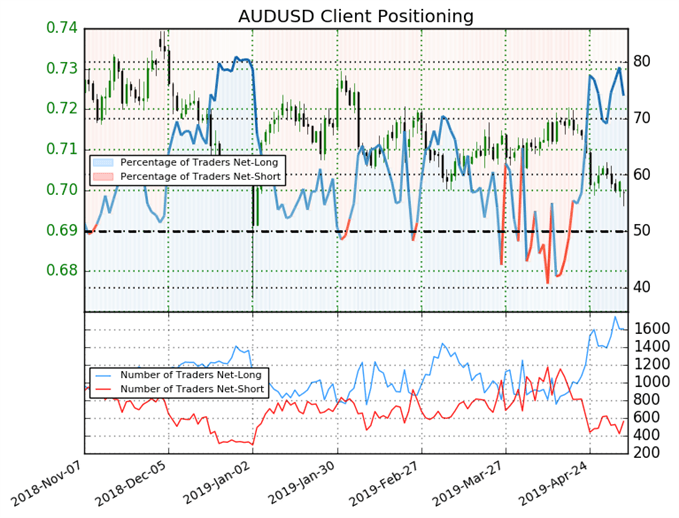