- The Citi Economic Surprise Index for Canada gained from 43.7 to 59.6 during February, a sign that data was coming in better than analysts’ estimates.

- Retail traders are net-short USDCAD but recent changes give us a mixed USDCAD trading bias.

The February Canada GDP report doesn’t appear like to will help traders or BOC policymakers find any clarity over the near-term economic environment. It appears that February represented the low point in growth conditions across the world: Eurozone PMIs declined in February; US GDP estimates were lowest in late-February and early-March.

Domestically, conditions appear to have been a bit better for Canada. Looking at data trends during February, the Citi Economic Surprise Index for Canada gained from 43.7 to 59.6. On balance, continued improvement among domestic factors may offset rising issues among external factors. Accordingly, Bloomberg News is looking for the yearly growth rate in February to stay on hold at 1.6%, the same rate in January (following the 0.4% annualized growth rate in Q4’18).

Despite the fact that Canadian economic data has remained strong over the past several weeks (the Surprise Index is now at 54.8), concerns over global growth have provoked the Bank of Canada into a more neutral policy stance; it was just last Wednesday when the BOC eliminated its bias for any rate hikes this year. Nevertheless, odds of a 25-bps rate cut by September remain low, currently at 15.1%. 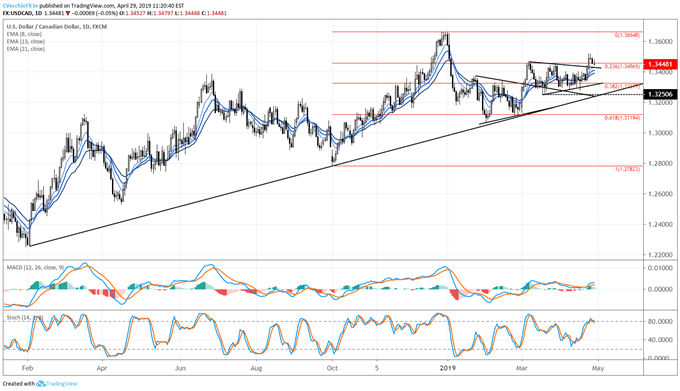 USDCAD prices have seen little follow-through following the bullish breakout from the symmetrical triangle last week. The April BOC meeting catalyzed the move higher, and even as the DXY Index has moved to fresh yearly highs, USDCAD has yet to push to a fresh high post-BOC.

That said, it’s far too soon to say that the bullish breakout attempt is a failure; traders may simply be digesting the move before loading back up for another swing higher. The daily 8-EMA coincides with the symmetrical triangle’s original resistance now turned support around 1.3430; if the bullish breakout attempt is valid, then this level should hold. Failure below 1.3430 would increase the odds of a reversal within the triangle itself back towards original support around 1.3330 (near the 38.2% retracement of the Q4’18 low to Q4’19 high range at 1.3327). 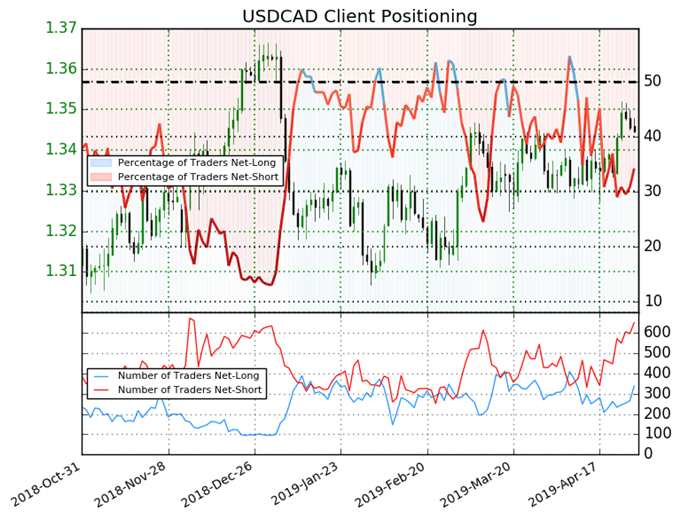