- The April Bank of Canada meeting is set to conclude on Wednesday, April 24 at 14:00 GMT.

- We’re expecting the BOC to signal that it’s firmly in a neutral policy stance, with the continued implicit understanding that oil prices will help guide the next rate move.

The Canadian Dollar has stabilized over the past few weeks thanks in part to ongoing gains byoil prices. With the oil industry accounting for nearly 11% of the Canadian economy, the sharprebound in energy prices in Q1’19 had a material effect on growth (per the January Canada GDP report) and inflation (per the March Canada inflation report).

But as policymakers await to see if the rebound in oil prices, they are in turn waiting to see if the Canadian economy can string together several months of positive growth before declaring their economic slowdown fears conquered. Rates markets are reflecting this reality, with Bank of Canada rate cut odds receding over the past week:

Overnight index swaps are pricing in a 7% chance of a 25-bps rate cut through July 2019. Through September 2019, odds of a rate cut only increase to 18.9%.As such, we’re expecting the BOC to signal that it’s firmly in a neutral policy stance, with the continued implicit understanding that oil prices will help guide the next rate move. 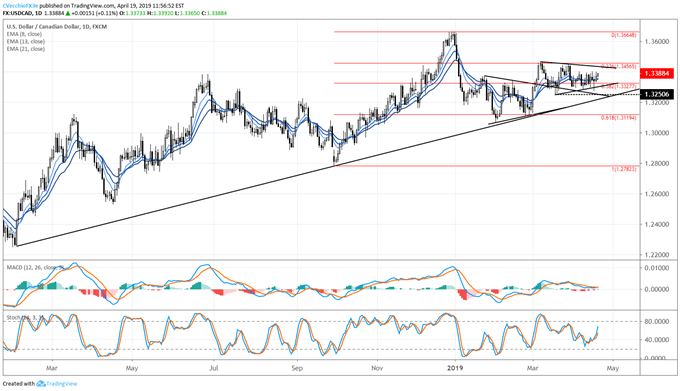 Just a few days ago it appeared that USDCAD prices had exited their symmetrical triangle to the downside. But by the end of the day on April 17, a bullish hammer had formed after rebounding from symmetrical triangle support, keeping the consolidation that started in early-March intact for now. The consolidation has seen USDCAD price trading between the 23.6% and 38.2% retracements of the Q4’18 high/low range. To this end, until we see USDCAD exit the symmetrical triangle, the forecast is neutral: a move above the 23.6% retracement (1.3457) and March high (1.3467) would signal a bullish resolution; a move below the March low at 1.3251 would suggest a bearish resolution – as well as a break of the uptrend from the February and October 2018 lows. 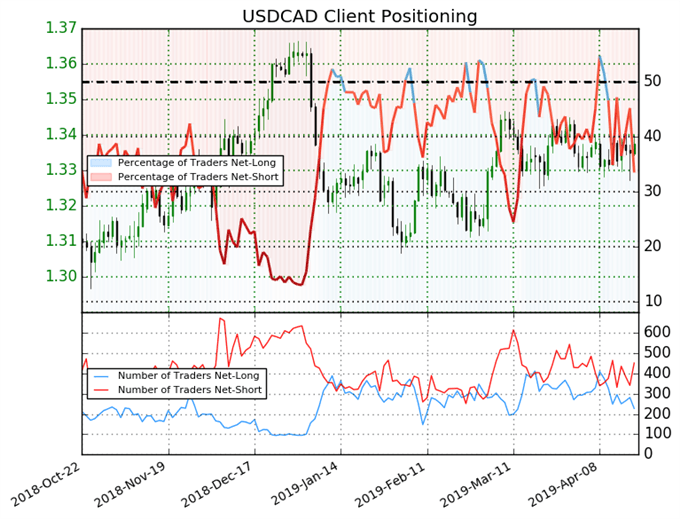